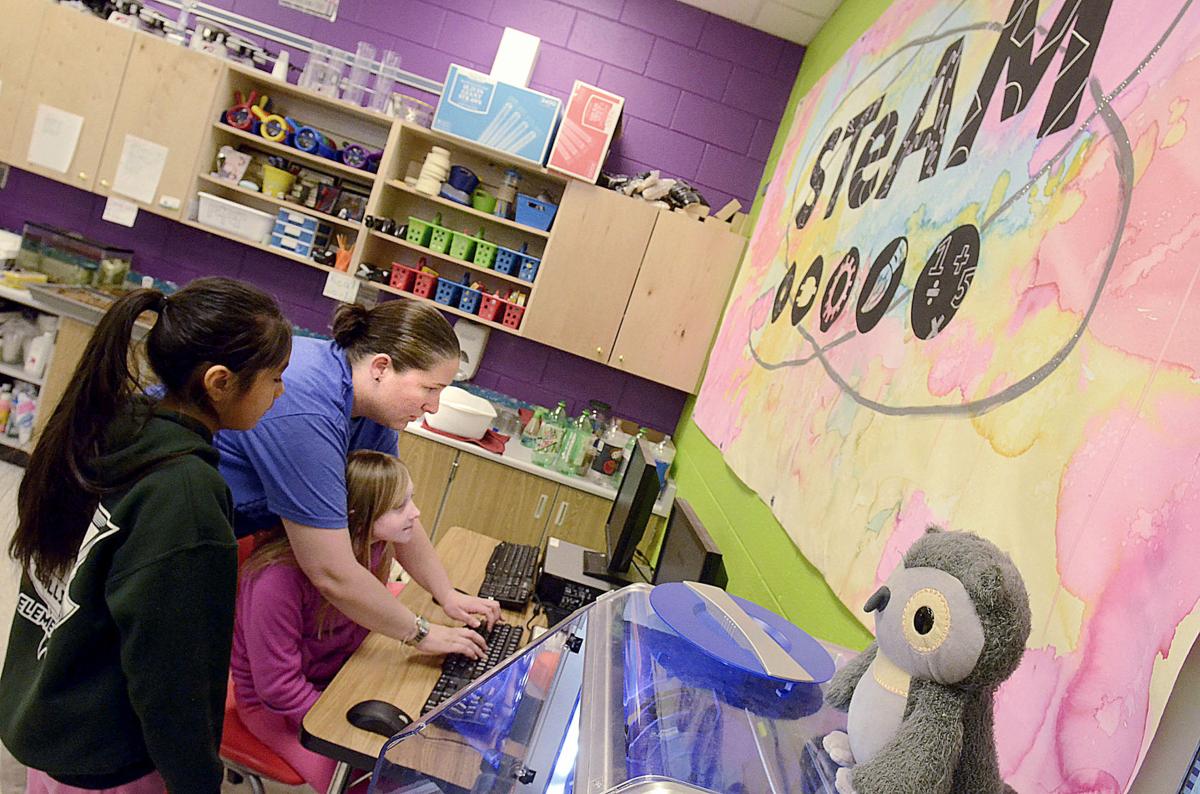 ROBERT C. REED/RECORD: Stephanie Eddings, a STEAM teacher at Balls Creek Elementary School, provides student Kenny Balard with assistance as he works on a project in the class, mixing both science, technology and math. 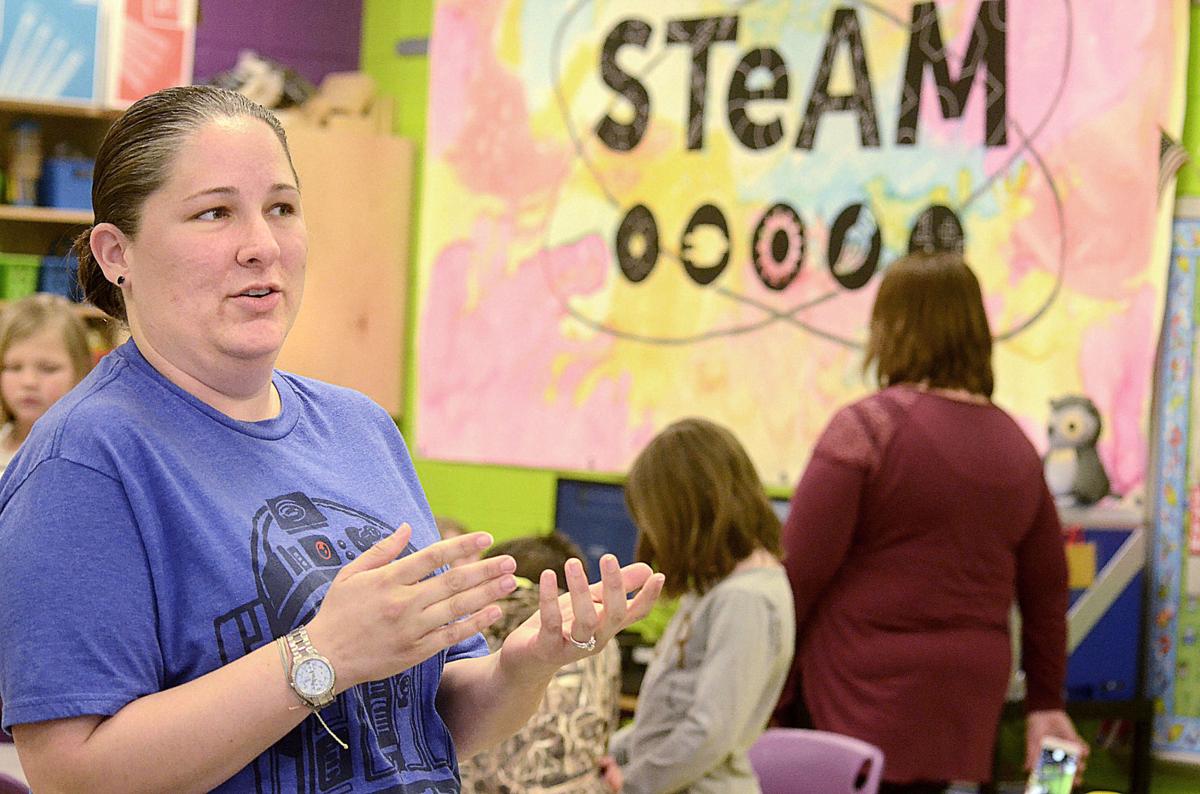 ROBERT C. REED/RECORD: STEAM teacher Stephanie Eddings at Balls Creek Elementary discusses what the benefits of being a graduate from a Teaching Fellows program would be in her class.

The North Carolina General Assembly recently proposed bringing back the Teaching Fellows Program to help improve recruitment of new teachers in the state.

It’s a program the General Assembly voted to end in 2011.

While the name is the same, it’s not exactly what many would remember from the previous program the state created in 1987.

The original Teaching Fellows Program offered competitive, four-year scholarships in return for a commitment to teach in North Carolina public schools for at least four years, according to a Public School Forum of North Carolina report.

If a recipient could not repay the scholarship through teaching service, the loan had to be repaid to the state with 10 percent interest.

According to the 2017 proposed bill, the state promises to forgive a Teaching Fellows loan if, within 10 years after graduation from a licensure program, a recipient serves as a teacher in a STEM (Science, Technology, Engineering, Mathematics) or special education licensure area two years for every year the recipient was awarded the loan.

Working at a low-performing school would increase the time to forgive the loan – a year for a year.

The loans would pay up to $8,250 per year for up to four years at any of the five institutions of higher education chosen by the governing commission.

“The return of a program like Teaching Fellows would be a great step in the right direction to recruit and retain high quality future teachers for North Carolina,” Catawba County Schools superintendent Matthew Stover said.

The last cohort of original Teaching Fellows students graduated in 2015.

The original program was offered at 17 public and private colleges and universities in North Carolina, generated 47,611 applications, enrolled 10,708 Fellows, and produced 8,523 graduates.

During the 2013-14 school year, 4,632 Fellows were employed throughout the state with 20 or more in 60 of the state’s counties including Catawba, Caldwell, Burke, Lincoln and Alexander.

Hickory Public Schools employs more than 22 within their own system, the system’s Director of Communications Beverly Snowden said.

"The teaching fellows program has always been a calling card for our state and a wonderful incentive to recruit and retain extraordinary teachers in our school district,” Newton-Conover City Schools Superintendent David Stegall said.

The focus of drawing in new teachers for STEM classes also is part of a current trend school systems have seen throughout the state.

Balls Creek Elementary Principal Rita Lail said the need for more STEM trained teachers has grown because of what local industries and businesses have been asking from their school systems.

“They need that science and technology and engineering, all of those things that make the students marketable,” Lail said.

Two years ago, her school established a fulltime position and class dedicated to STEAM, a cousin program to STEM – just add the component of the arts to the others.

Stephanie Eddings was chosen to fill the role. This is Eddings 11th year at Balls Creek, and prior to becoming the school’s STEAM teacher, she taught fifth grade science and reading and also had a background in computer technology.

“Typically, we’ve had teachers who have been so focused on one area of science, whether it’s biology, chemistry and then you had your technology teachers who were separate,” Lail said. “Now with the STEM focus it’s bringing all those pieces together, like tying in a 3-D printer into a science class.”

She certainly sees the value of having more teachers trained with that broad range of knowledge.

The proposed bill's other focus of encouraging new teachers to work in low performing schools reflects one of the shortcomings in the original Teaching Fellows Program, according to a 2012 University of North Carolina study.

There were no restrictions regarding where a Teaching Fellow taught, only that service payback had to be in a public school in North Carolina.

So while Teaching Fellows today work in every county in North Carolina, they tend to be clustered in the larger metropolitan areas where teacher recruitment overall has historically been less problematic than in the state’s poorer and rural districts, according to the study.

“It Is exciting that the legislators have a renewed focus on bringing back the program, and even more so with the focus being on hard to staff areas,” Stegall said. “We are very grateful that this is a possibility once again."

The loss of the previous program also impacted all those colleges and universities training new teachers, including Lenoir-Rhyne University (LRU).

“That hurt us all in 2012 when it came to recruitment because there was a set group of students we knew we could bring in who were highly qualified and would make it through and become great teachers,” LRU Dean of the College of Education and Human Services Hank Weddington said in a previous HDR story.

Three years ago, LRU created its own Teacher Scholars program to help turn that around. Scholarships of up to $5,500 per year for the four years of study are available to eligible incoming freshmen.

Funding was another issue for the program, according to the report.

The new policy would appropriate from the General Fund to the Board of Governors of The University of North Carolina for the 2017‑2018 fiscal year $250,000 to implement the Teaching Fellows Program.

Six million dollars in recurring funds would be used for the operation of the program and for the award of forgivable loans beginning with the 2018‑2019 academic year.

Members of the General Assembly aren’t the only ones interested in using forgivable loans to entice new teachers into North Carolina.

His plan would draw talented North Carolinians into the field of education by providing forgivable loans of $10,000 per year to students who commit to teaching in a state public school for four years after graduation, or three years at a low-performing or low-wealth school, according to highlights from the budget for education.

ROBERT C. REED/RECORD: Stephanie Eddings, a STEAM teacher at Balls Creek Elementary School, provides student Kenny Balard with assistance as he works on a project in the class, mixing both science, technology and math.

ROBERT C. REED/RECORD: STEAM teacher Stephanie Eddings at Balls Creek Elementary discusses what the benefits of being a graduate from a Teaching Fellows program would be in her class.