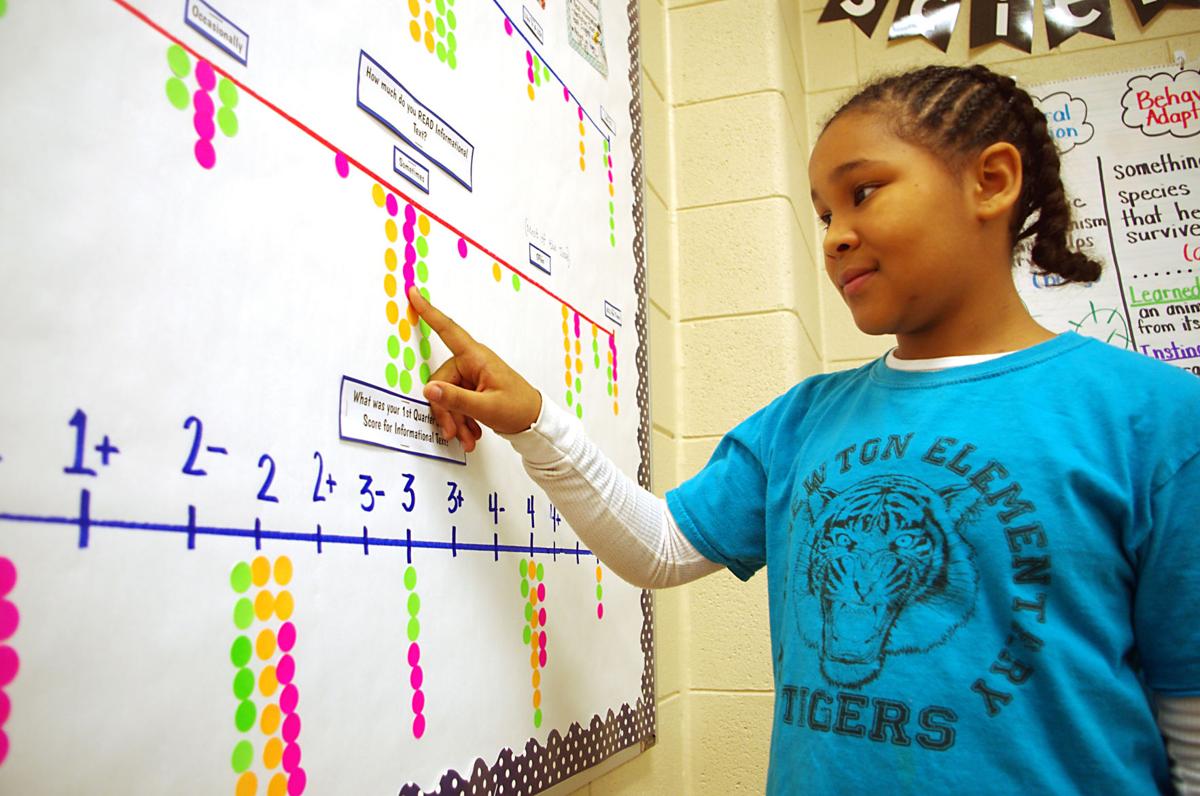 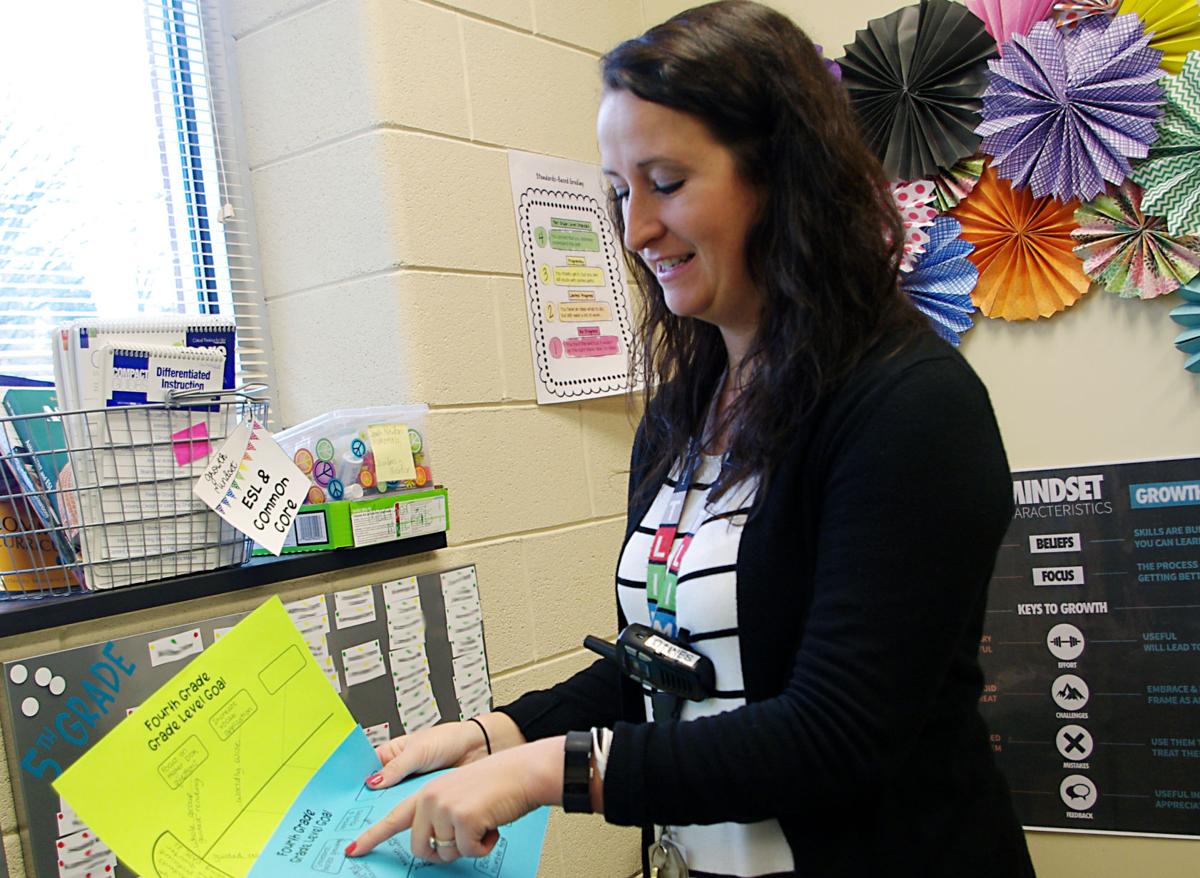 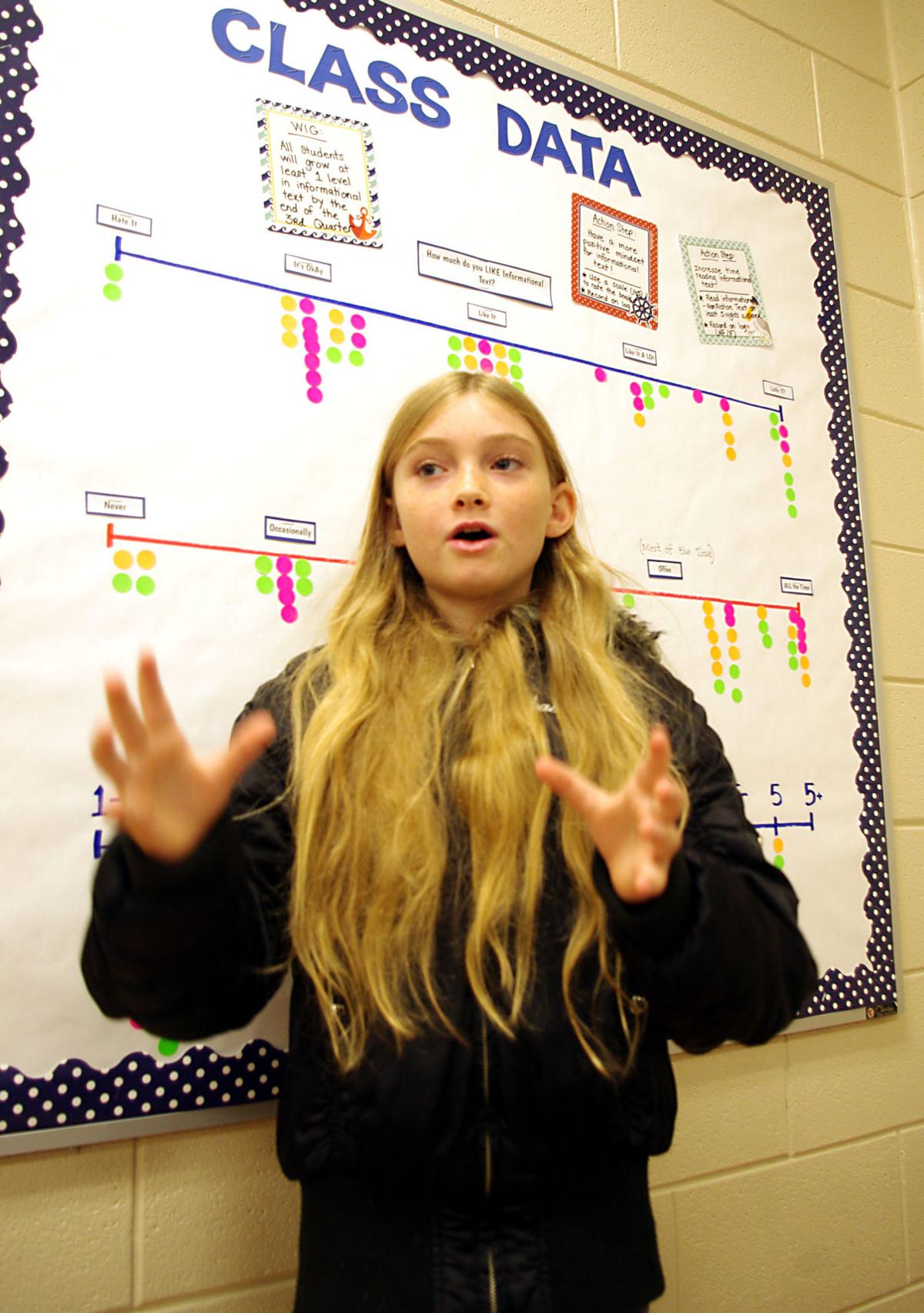 JOHN BAILEY/HICKORY DAILY RECORD: Kyra Buchanan talks about why her class data wall is important to her and how it encourages her to improve. 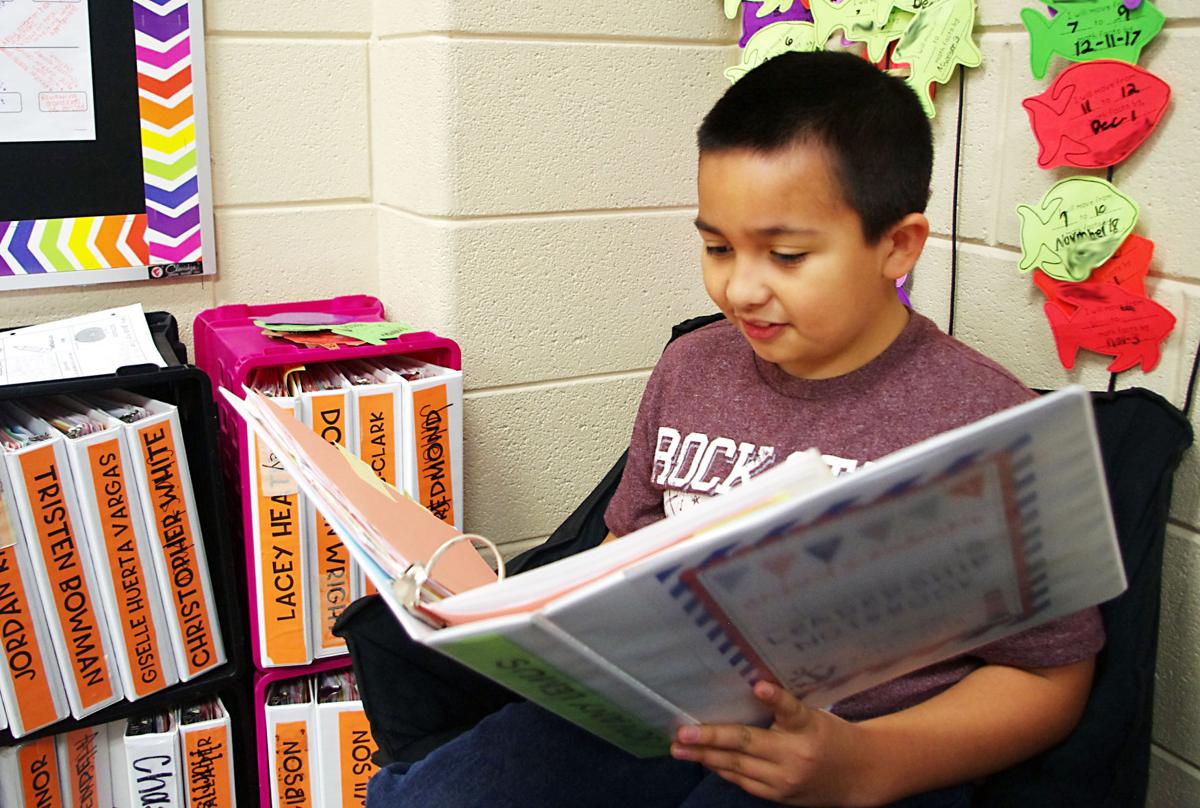 JOHN BAILEY/HICKORY DAILY RECORD: Kyra Buchanan talks about why her class data wall is important to her and how it encourages her to improve.

NEWTON – The use of data walls by teachers and administrators to help track the performance of students is something Newton-Conover City Schools embraced years ago.

It’s helped play a part in the district’s success, according to the recent North Carolina accountability results.

In 2016-17, all schools in NCCS either met or exceeded expected academic growth for the first time in district history, according to a district press release and the state’s data.

No schools in NCCS received a N.C. School Performance Grade below a C, and the district is one of only six in the state where all schools either met or exceeded growth and had no schools ranked at a D or F for student performance.

“We want all students to grow at least one level in informational text by the end of the third quarter,” Vass said.

She created a graph for measuring areas like how much students liked reading informational text and how much of it they read. The students then place markers on the board to show whether they never, occasionally, or often accomplish one of the tasks.

“When you’re reading, if you don’t have that positive mindset then you’re probably not going to be putting the effort into reading it,” Vass said. “If you’re never reading it or only occasionally reading it, it could be corresponding with what your score is.”

Overall, Vass sees the visual aspect of the wall as a tool to help hold both her and her students accountable.

Everyone sees the classroom’s goals and the action steps on how to get there every day.

This method is repeated throughout NCCS in some form, from district wide to individual classrooms.

James Frye, NCCS public information officer, said from a historical perspective it’s important to look at how accountability has changed.

“No Child Left Behind really pushed a lot of data driven accountability because legislatures, the people at the Department of Public Instruction really wanted to find ways to track progress, whether or not teachers are effective or ineffective,” Frye said.

“We’ve come to the place we are now because we spent so many years trying to meet those requirements.”

The district’s director of K-8 curriculum and ESL, Tammy Brown, said a data wall is their way of creating a visual representation of student progress for teachers by tracking student proficiencies. She has one in her office to give her an overview of all the elementary and the middle school in the district.

Case 21 is the district’s formative or benchmark assessments taken quarterly, specific to NCCS.

In the end it’s all about growth.

“We’re not looking for 100 percent. We’re saying are you growing as a kid,” Brown said. “Our goal is a year’s worth of progress.”

The data wall is meant to encourage in areas that need help and then highlight strengths and successes and celebrate those.

“Using formative assessment is basically for you to grow as a teacher, looking at what makes you a better teacher,” Brown said.

It’s meant to encourage a collaborative approach among teachers and administrators and create the support systems needed in a classroom.

“It’s not an, ‘I gotcha,’” Brown said. “It is saying, ‘you’re not doing well in this but what if my neighbor is doing really well with that strand.’ I want you to go visit that classroom. I want you to see what she’s doing, maybe she can help you with that and then maybe you can help her in another strand.”

Frye has seen this kind of data sharing among teachers in the district’s regular professional learning community (PLC) meetings.

He described a recent discussion about Case 21 data, where each teacher had a copy of the grade levels’ data, and they met as a grade level. As teachers went through the data together they would see where someone’s students might be struggling in a certain standard and would ask how they could help.

“That’s really the kind of culture this is building,” Frye said.

The data sharing has encouraged educators in the system to embrace the need to constantly look for ways to improve and grow with the input from others, Brown said.

“By having the collective around us, we can grow so much quicker than being in a closed-in room of four walls,” the K-8 director said. “In the past, it used to be, you’d get into that classroom, you’d shut your door and you’re in your own world. Now, it is ‘I want your input. I want your help,’ and that’s what I think has made us more powerful here.”

To go along with the data, the district uses a 45-minute block of the day set aside as intervention or enrichment time. Once students are identified as needing help with a particular strand, academic skill, they are placed in a small group where a teacher can focus on helping them figure out what they need to do to improve.

This is applied as well to AIG (academically or intellectually gifted) students or students who’ve mastered a particular strand.

“We don’t want them to sit there and not get what they need, so we put them in an enrichment group and in that group they push those standards higher,” Brown said. “They’re actually meeting the kids where they are and pushing them forward.”

She described the data as the system’s guidepost of where they’re headed and what they need to do to implement change as needed.

“Which means they understood what the deficits were,” Brown said. “We had the S3 (assessment) visit, and we told them in those visits some truths they might not have wanted to hear, but it was stuff we needed to say to help them grow. Because they listened, they made the changes, and we saw the positive growth at the end.”

She sees this as an example of the trust in the district among teachers and administrators, and in the end, it means success for the students.

“Now, they trust each other enough to say to each other, if you can make that 87 percent in your class as proficient and mine is only 38 percent, please help me. Show me what to do,” Brown said. “Those are the kind of conversations we’re having now.”

Brittany Gaines is the instructional coach at South Newton and has her own version of a data wall specific to her school. She said the key really is focusing on the growth of each student.

“We ask, even for those students who might not be proficient, on grade level or passing, are we growing them, are they closing that gap they have and getting closer to being on grade level,” Gaines said.

In PLCs, Gaines looks at the type of questions the students are missing with their teachers.

“Was it because they didn’t really understand the standards, or did they not go deep enough in the standards,” Gaines said. “I think it helps build that environment where we’re trying to grow every one of our kids and meet the needs of every kid in our school.”

“It helps identifies the gaps,” Reynolds said. “In fourth grade, we work on multiplication and division as our focus, but if our kids don’t have that foundational knowledge of addition and subtraction that’s a gap we need to fill.”

She sees the data wall as helping build confidence in her students as well.

“They do see more success because a lot of my kids have met a goal every single week of the school year so far,” Reynolds said. “They want to reach that next level.”

Kyra Buchanan is a student in Vass’s class and said the data wall makes her a better student.

“It helps me see where I am at and where I need to be,” Buchanan said. “It helps me build like a mindset. It helps me see if I’m reading a lot and if I like it a lot that means I’m going to do well and I can move up.”

She’s learned the more she reads the better her scores will be and she likes that kind of feedback.