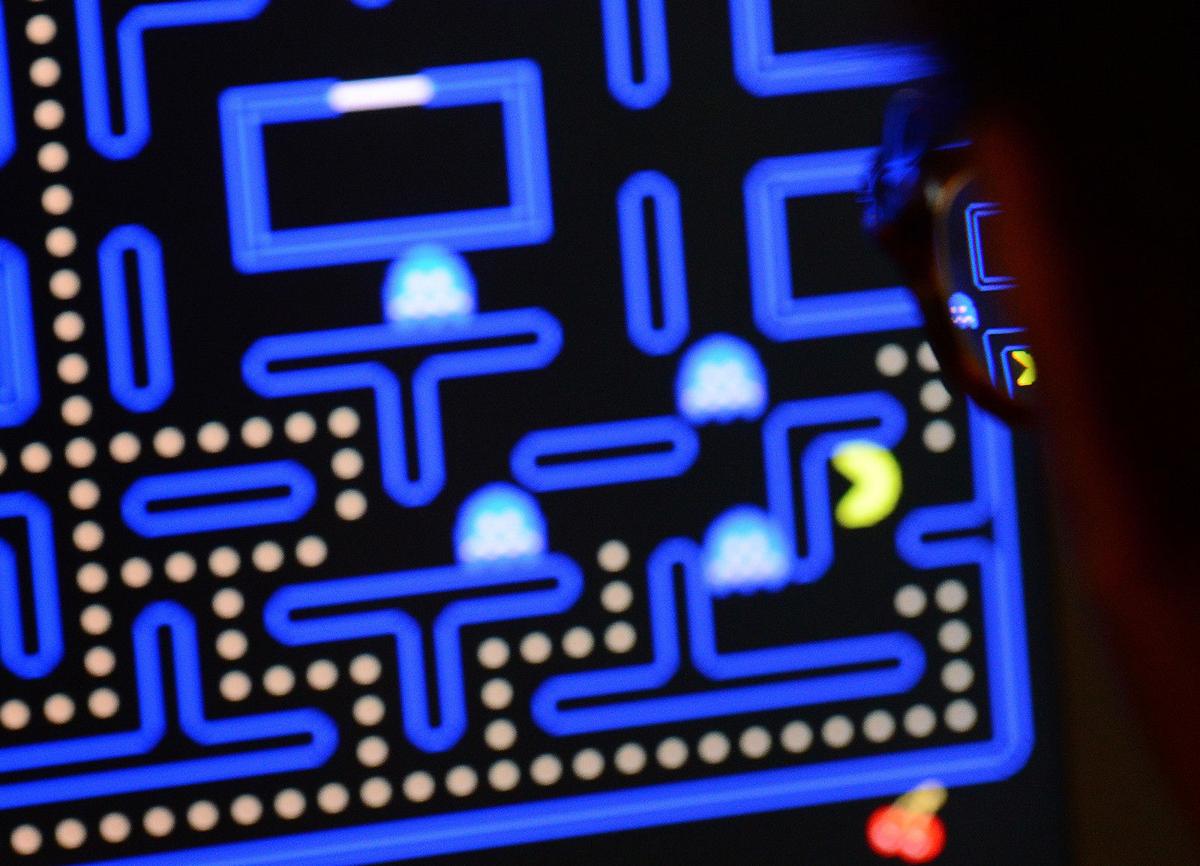 An employee plays the video game Pac-Man (1980) during an exhibition preview featuring 14 video games acquired by The Museum of Modern Art (MoMA) in New York, March 1, 2013. 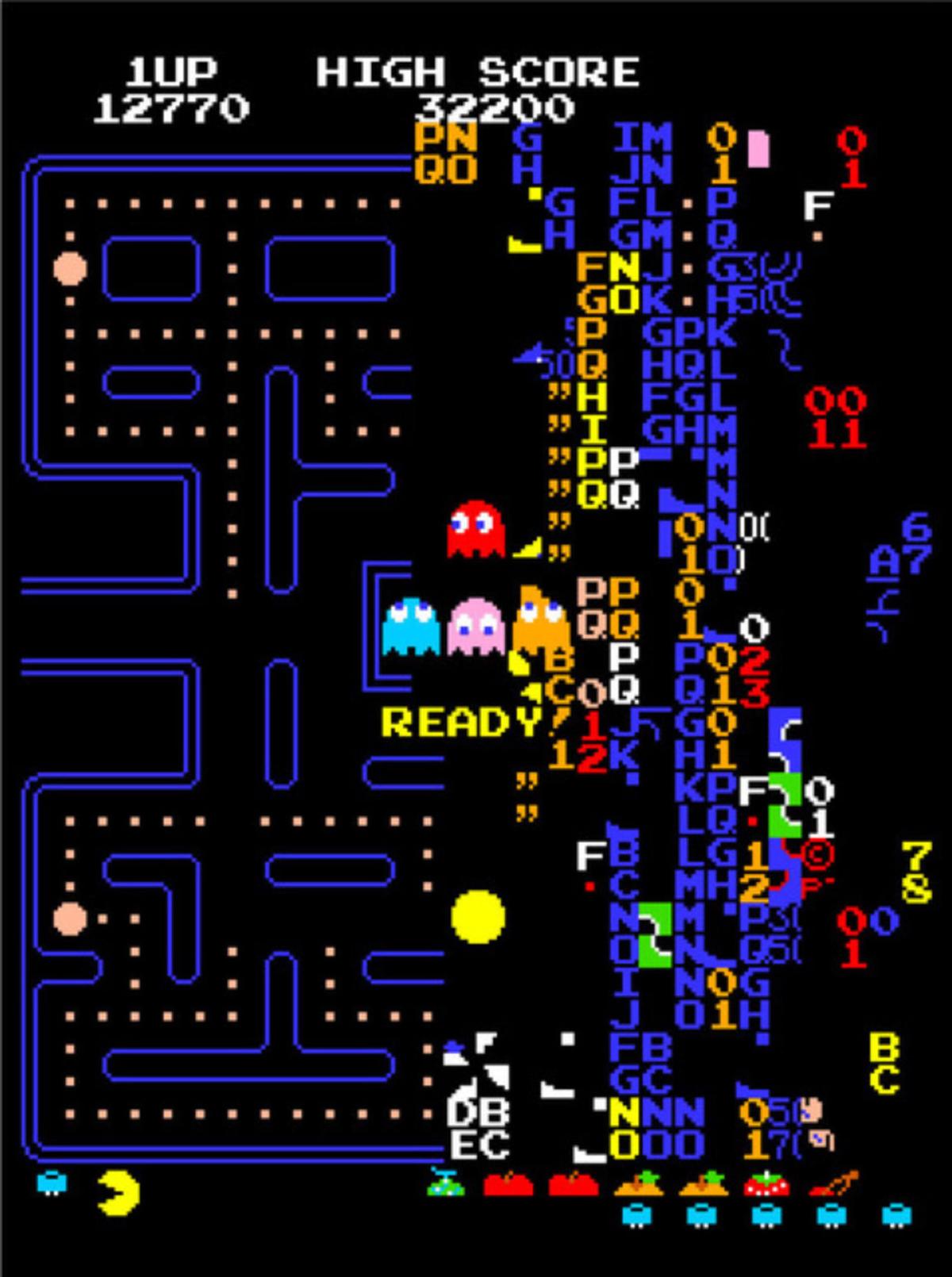 Billy Mitchell reached the final level of "Pac-Man" in 1999. Unfortunately, at that point, the game ran out of memory and could no longer draw a complete board. 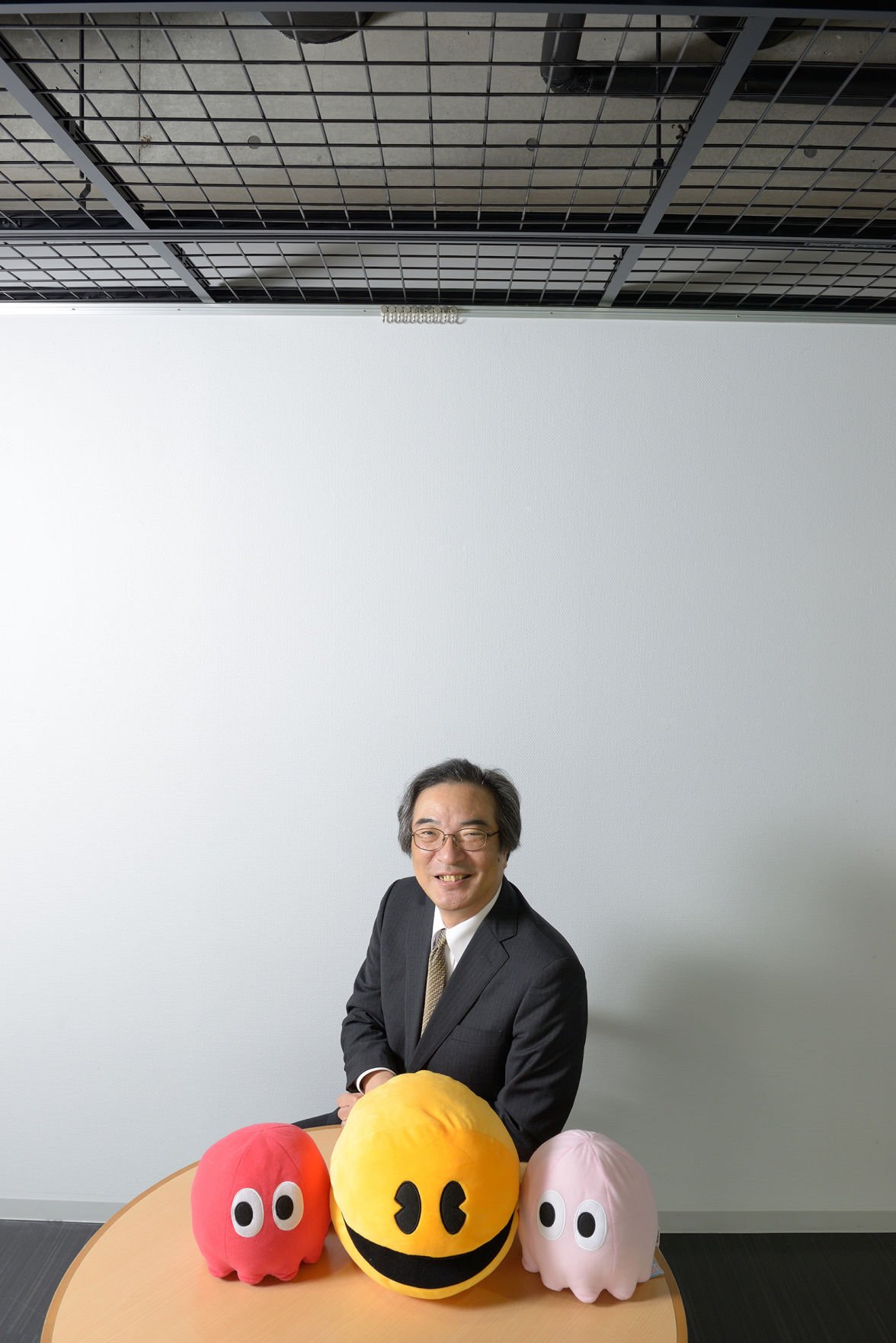 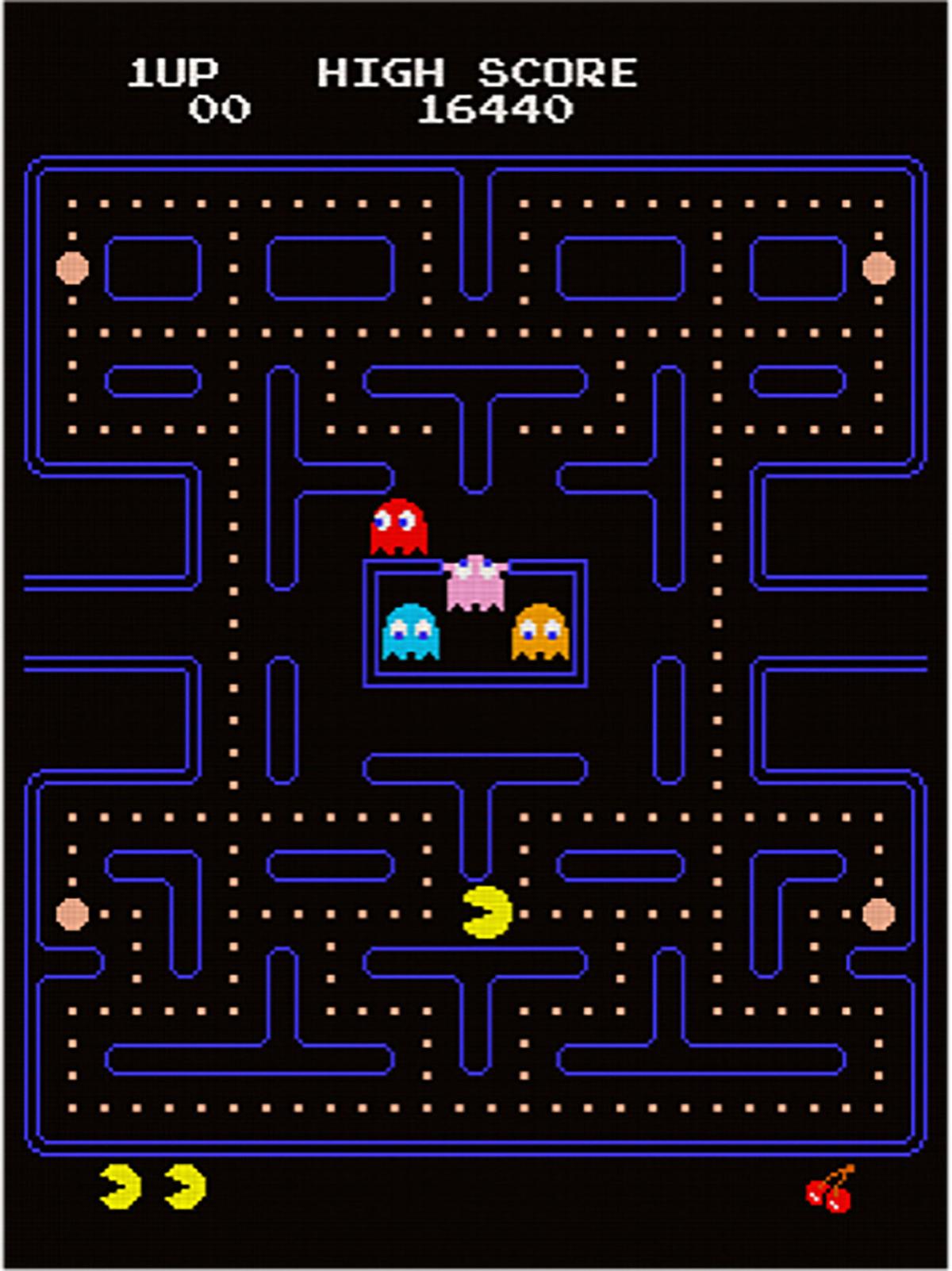 "Pac-Man" is the most successful arcade game of all time. 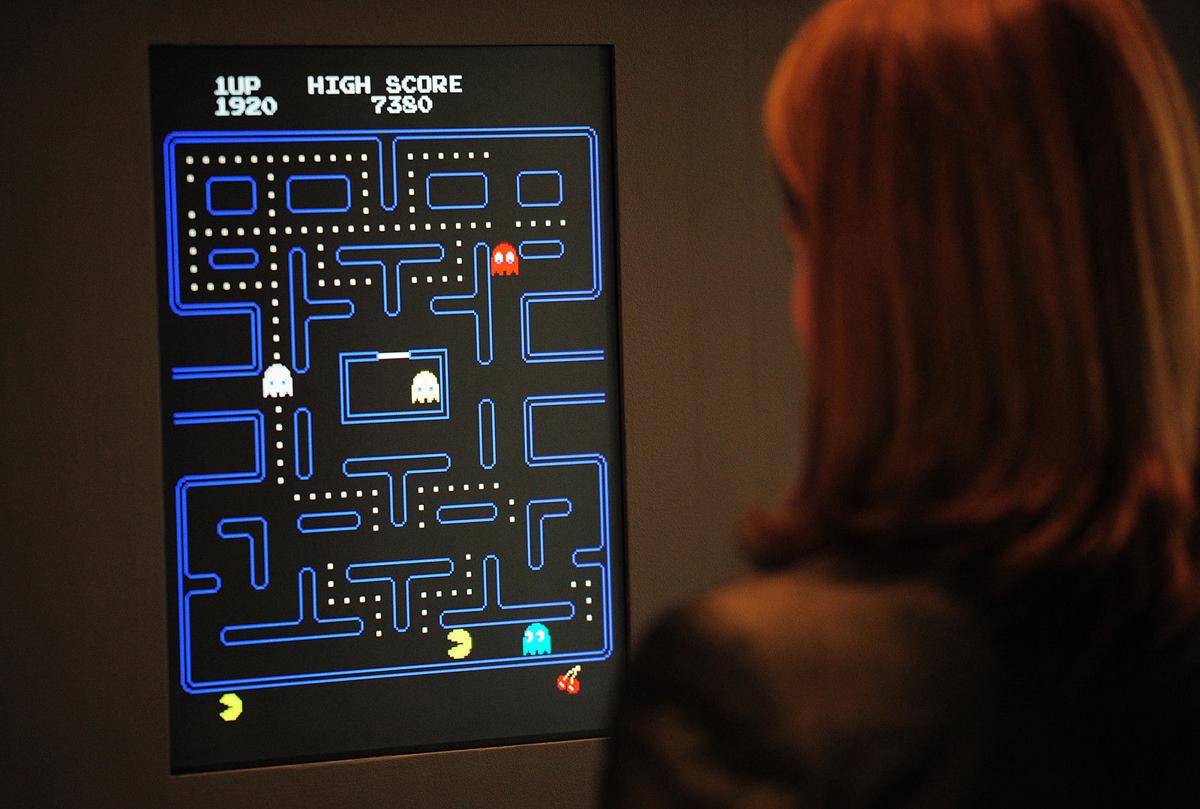 Paola Antonelli, senior curator of architecture and design at the Museum of Modern Art (MoMA) plays "Pac-Man" at an exhibition preview in 2013. 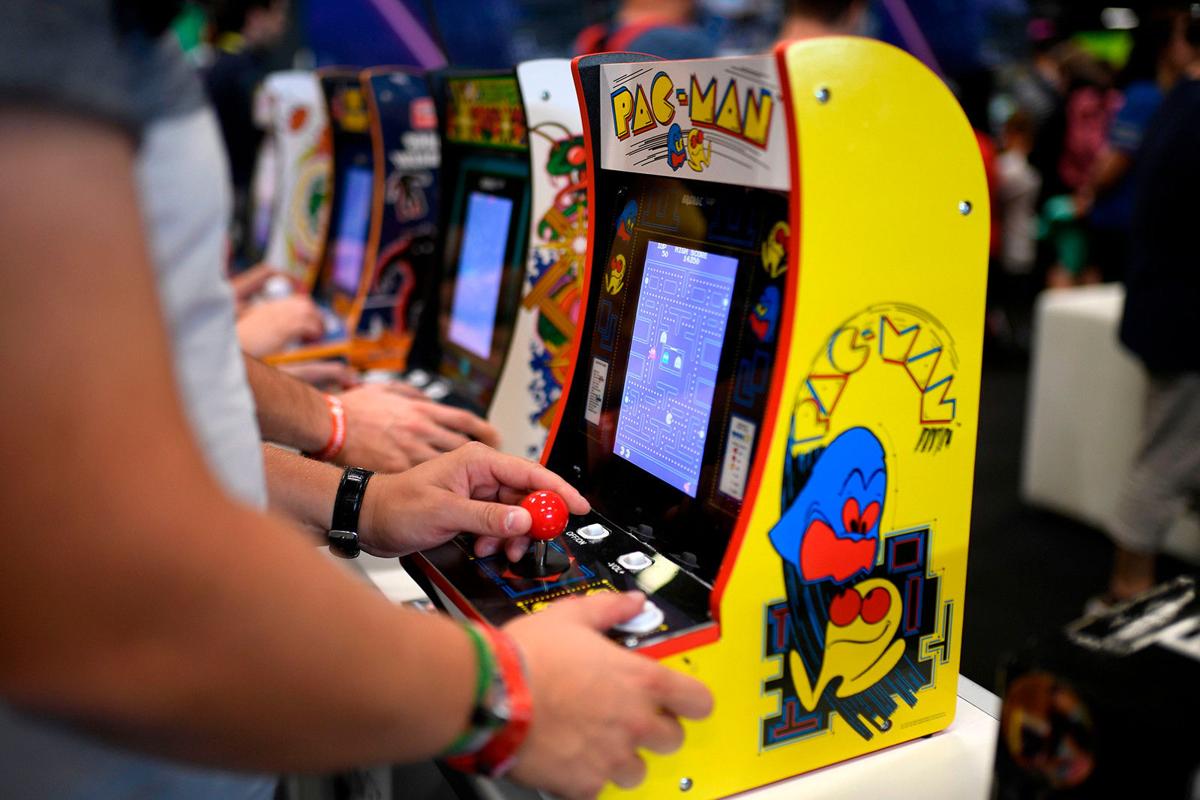 When "Pac-Man" debuted in Tokyo 40 years ago, no one could have predicted it would become the most successful arcade game of all time.

Though video games were a relatively new medium, the recipe for success at the time was already well-established: People wanted to shoot things.

But the creator of "Pac-Man," a young game designer named Toru Iwatani, wanted to try something completely different.

"When I started drafting up this project in the late 1970s, the arcades were filled with violent games all about killing aliens," said Iwatani, who was working for Japanese games firm Namco at the time. "They were gloomy places where only boys went to hang out. What I wanted to do was make arcades into livelier places that women and couples might enjoy visiting, so I thought it best to design a game with women in mind."

Iwatani had little experience. He was just 25, and preferred working on pinball machines, not video games. His first title, 1978's "Gee Bee," was essentially a digital version of pinball and wasn't particularly successful. There was little indication that his next project would change video game history forever.

And yet, when the first "Pac-Man" machine was placed in an arcade in Tokyo's bustling Shibuya district on May 22, 1980, it did exactly that.

The game wasn't called "Pac-Man" back then, but rather "PuckMan," which offers a glimpse into its origins. "Paku paku taberu" is a popular Japanese phrase for gobbling something up, with "paku paku" mimicking the sound of a snapping mouth and "taberu" meaning "to eat."

"I had started off assuming that themes like fashion and romance might be best suited for a female audience," said Iwatani. "But then I thought -- and this may have been presumptuous of me -- that women also enjoy the act of eating, or 'taberu' in Japanese, and that's how I found myself centered around this keyword and the act of eating as a concept."

While drawing up ideas for a game based around food, Iwatani grabbed a slice of pizza from a box and had an epiphany: The remaining pizza slices formed Pac-Man's shape, and the rest was history (or so the story goes, according to Iwatani).

When the game was imported into the US, however, the name "PuckMan" was deemed inappropriate. Although the titular character did somewhat resemble a hockey puck, the game's American distributor, Midway, feared that kids would scrape off the marquee, changing the "P" to an "F." After its name was changed, the game became an instant hit, with nearly 300,000 units sold worldwide from 1981 to 1987.

"Pac-Man" pioneered a number of innovations in gameplay and game design. It featured the first "power-up" -- the big pill that made ghosts vulnerable -- and the first cut scenes, the small animated sequences between one level and the next. It was also one of the very first games in the "maze" genre.

But most importantly, it had a defined main character, which was unheard of at the time according to Chris Melissinos, a video game historian and curator of the Smithsonian American Art Museum's 2012 exhibition "The Art of Video Games."

"Here comes this game that's brightly colored and centered around a character that really doesn't have a gender," he said. "And all of a sudden, we found a mascot -- the first character in video games that existed not just in the artwork, but in the game itself.

"We started to see women coming into arcades, multiple generations playing in the same space. For the first time we had a game that was not about aggression, so it fundamentally changed the type of games that designers felt that they could create."

To honor its role as a pillar in the history of video games, "Pac-Man" was among the titles added to the permanent collection at the Museum of Modern Art (MoMA) in New York in 2012.

"We were not only enraptured by the masterful use of the flat landscape, but also the author's good intentions when it comes to the human behaviors that video games can engender and play with," said Paola Antonelli, a senior curator at MoMA. "Toru Iwatani wanted to develop a nonviolent game for teenage couples, not only for boys. In creating Pac-Man's nemeses (colorful ghosts), Iwatani opted for cuteness over scariness."

The appeal of "Pac-Man" lies, perhaps, in its simplicity. Unusually, the game doesn't require players to press any buttons at all (except to start a one-player or two-player game), and the control system instead uses a single joystick. However, that doesn't mean that Pac-Man is an easy game: It is, in fact, fiendishly difficult in a way that only classic arcade games designed to gobble up quarters can be.

That's why it took nearly 20 years for anyone to complete a perfect game of "Pac-Man" -- finishing with no lives lost and the maximum number of points from each level.

"It took between five to six hours," said Billy Mitchell, who became the first person to achieve a perfect game in 1999, and still one of only a handful in the world to ever do so. "The hardest part is to sit there and continually remain focused, not allowing distractions. You have a system down to play. If you go off of your system for even a second, it creates total chaos on the board."

Mitchell agrees that simplicity underpins the game's enduring success. "No matter how old you are or when you last played, everybody understands what 'Pac-Man' is. Also, if you're watching from behind somebody, you can understand the drama that's unfolding."

Mitchell's perfect game saw him reaching level 256 and scoring 3,333,360 points. At that stage, the game runs out of memory and can no longer draw a complete board, so half the screen was garbled, making it impossible to progress further. Doubting anyone would ever go that far, Iwatani and his team never even programmed a celebratory ending.

He did, however, spend months programming the ghosts' behavior. Named Blinky, Pinky, Inky and Clyde, they each have a "personality" determining their strategy.

"We introduced an AI-like algorithm that sent the ghosts to surround Pac-Man from all sides," Iwatani said. "Some other touches we added (included) restarting from a slightly easier difficulty after the player slips up and gets caught, or occasionally sending the pursuing ghosts off course, back to their positions to give the player some room to breathe. We had all sorts of tweaks to make sure we weren't simply stressing the player out."

The inspiration for the ghosts' appearance came from a Japanese manga called "Little Ghost Q-Taro," which Iwatani read as a child, as well as the American cartoon "Casper the Friendly Ghost."

"The relationship between Pac-Man and the ghosts is one that's meant to pit them against each other but only in a very superficial sort of way, that stirs up no real hatred," Iwatani said. "It's a relationship influenced by the ideas of the 'Tom & Jerry' cartoons."

"Pac-Man" spawned countless sequels, the most popular of which was "Ms. Pac-Man." It also paved the way for narrative-based titles such as "Donkey Kong," offering games a way out from the shoot 'em up stereotype.

It's still tremendously addictive: When Google replaced its logo with a playable version of Pac Man in 2010, it cost the world almost 5 million man-hours and $120 million in lost productivity, a study concluded.

Iwatani last worked on a Pac-Man title in 2007, and he now teaches game design at Tokyo Polytechnic University. He is not too impressed with modern games, and says that in adapting to smartphones and other small screens, the ideas behind them have gotten small too.

"When 'Pac-Man' was first released, video games were still something new and unusual for everyone but game fanatics. For many people, I think it ended up being their very first experience with a video game," he said, speaking of the game's legacy.

"And now today, 40 years later, it's still enjoyed by not only women, but men and women, young and old alike, all around the world. If we were to compare it to music, it might be something like a popular song that everyone knows and has heard before."

AN AFFORDABLE TREE SERVICE AND LANDSCAPING