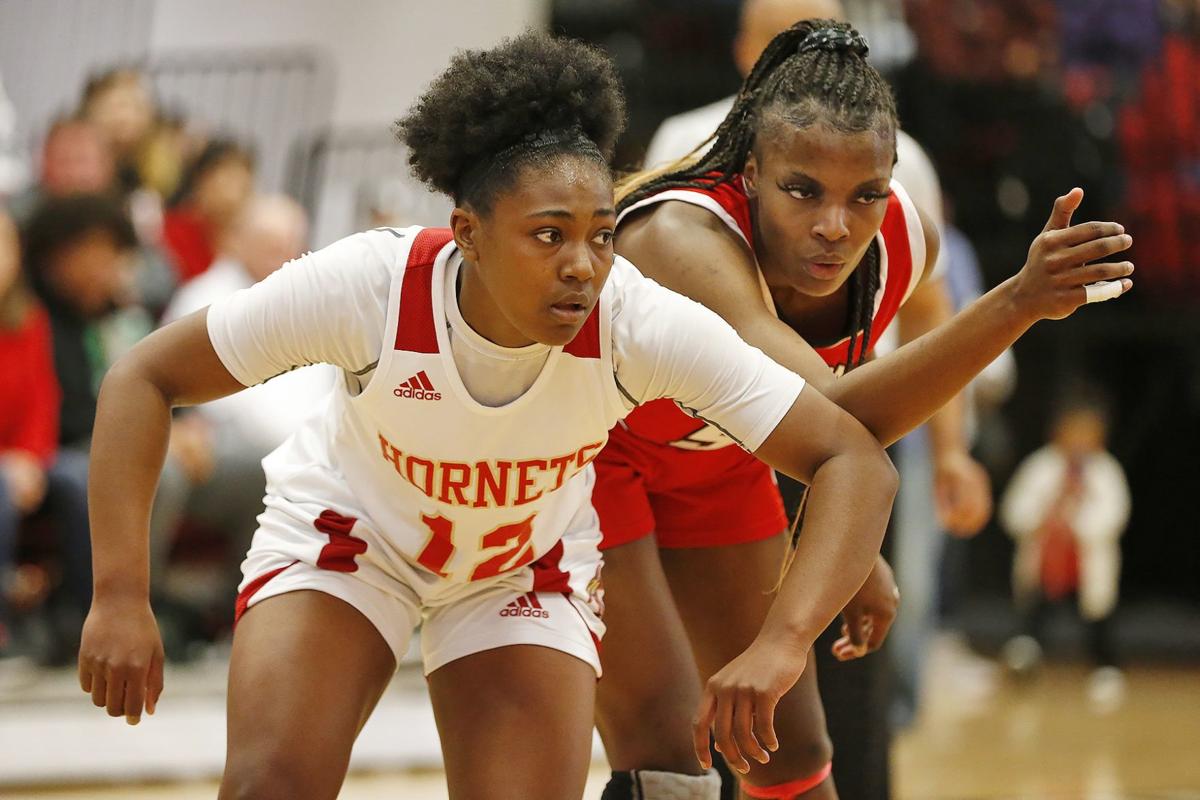 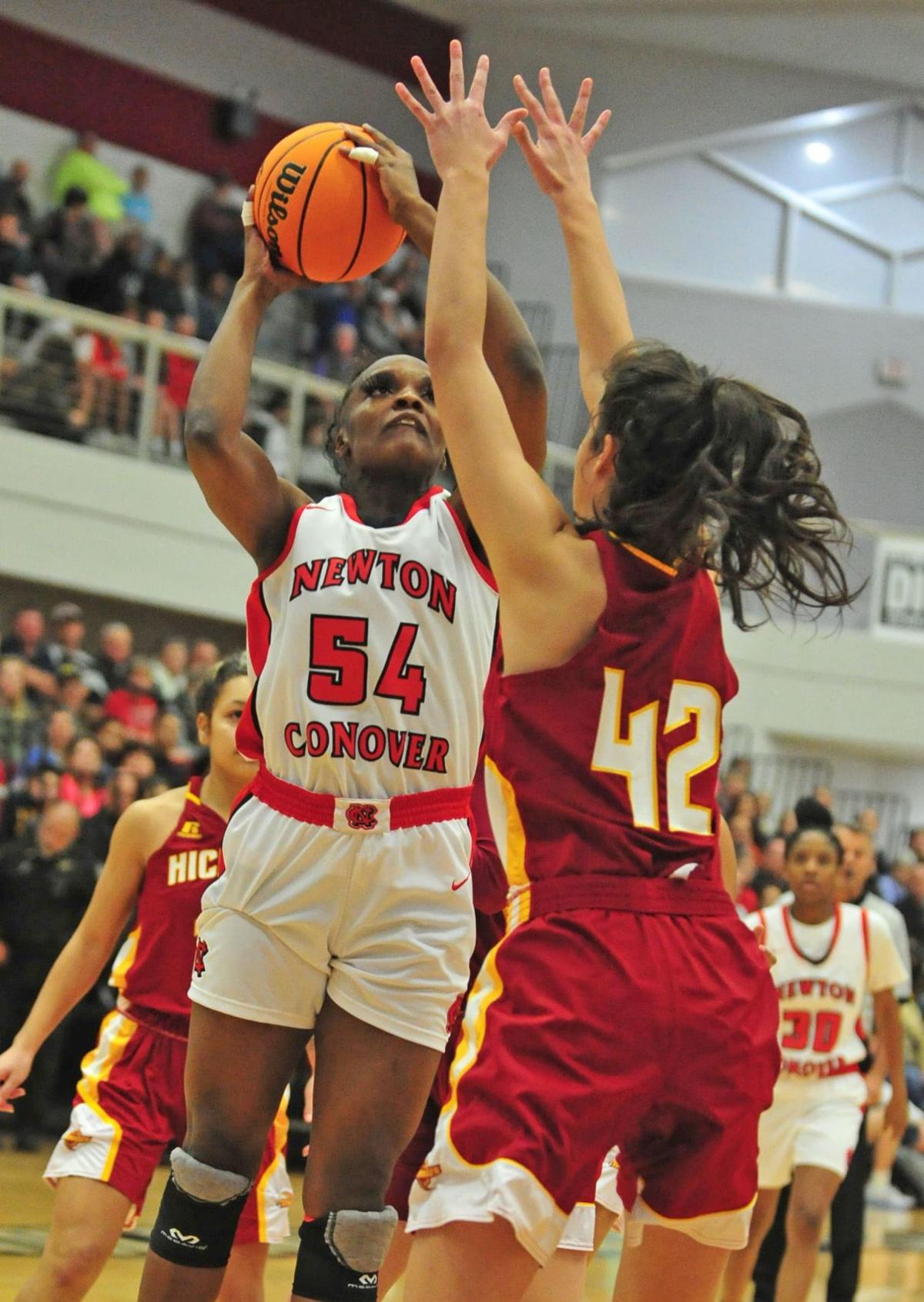 Newton-Conover's Chyna Cornwell (54) goes for the shot against Hickory's Shelby Darden (42) in this file photo.

Newton-Conover's Chyna Cornwell (54) goes for the shot against Hickory's Shelby Darden (42) in this file photo.

NEWTON — Newton-Conover girls basketball coach Sylvia White has often referred to Chyna Cornwell as “a once-in-a-lifetime player,” and she should know. Now in the second season of her third stint as the Red Devils’ head coach, White has seen Cornwell record 61 consecutive double-doubles since she returned to the sideline.

“It’s really huge,” said Cornwell of being named the state’s top female player. “And still when I think about it, it just doesn’t seem real. … I’ve been working towards that accolade since my freshman year, since I started playing high school basketball, and earning that accolade really overwhelmed me and really humbled me, made me very emotional.

“It really humbles me and I just thank God first of all for giving me my talent and my abilities too,” she added. “Just to receive the accolades I’ve gotten and everything I do off the court and on the court too, I just thank God for that first and foremost. If it wasn’t for Him, I wouldn’t be in the position I am today.”

Cornwell averaged 26.2 points, 16.7 rebounds and 1.6 blocks per game while leading Newton-Conover to a 29-2 record and the 2A state title game, which remains in limbo due to the ongoing coronavirus pandemic. She surpassed 2,000 points and 2,000 rebounds in her high school career this season, and is a major reason why the Red Devils have won 21 straight games.

“That’ll mean everything to me,” said Cornwell of the possibility of playing a final high school game for the 2A classification’s biggest prize. “My team and I, we’ve worked so hard to get to the state championship game. We’ve been working all season for it. … That’s a really big opportunity and that game in particular will be one of the biggest games of my high school career and I would love to play that. I will be very, very sad if I don’t get to.”

Regardless, Cornwell is proud of her growth on the court during her time as a Red Devil. She has made great strides over the past four seasons.

“I think my strength on the court has really improved,” said Cornwell. “I’ve been taking weight training since my freshman year and I feel a lot healthier and I’ve gotten bigger and stronger. … I have more muscle tone, more muscle mass on my body. Also training too, training almost every day, and changing my diet as far as what I eat.”

Cornwell has also improved her jump shot and her free throw shooting, although most of her scoring occurs close to the basket. Still, shooting 74.9% from the field is certainly nothing to sneeze at, regardless of where those points come from.

Playing AAU basketball has been a big help as well.

“I think travel basketball has really helped me get better because that’s when we play against competition that includes different girls from all over the country,” said Cornwell. “… It just makes you figure out what parts of your game you need to get better at, so I appreciate travel basketball for that.”

Most importantly, Cornwell has had a strong team around her during the 2019-20 campaign. With fellow seniors Aaliah Walton and Jahlea Peters, junior Grace Loftin and freshman Cassidy Geddes joining her in the starting lineup most of the season along with some solid bench pieces, she has had plenty of support.

“The majority of them I’ve played with since my sixth or seventh grade year, and two girls on the team, Aaliah and Jahlea, I played travel with too,” said Cornwell. “I’ve known these girls for a while on and off the court, we’re all friends. We have built relationships and a really tight bond, and that really helps us on the court just to have that connection, have that chemistry. … My team is like my second family and I couldn’t wish for any better.”

After her high school career wraps up — hopefully there’s still one more game in store — Cornwell will continue playing hoops at the Division I level. In November, she signed her national letter of intent to attend Rutgers University, where she will play for legendary coach C. Vivian Stringer.

“She’s a legend,” said Cornwell of Stringer, who is one of only seven collegiate basketball coaches, six in the women’s game, with over 1,000 career wins. “When I first stepped foot on campus, she really made me feel like I was already at home, like I was already a part of the family and the tradition that they have already at Rutgers University.

“She really cares about her players, not only on the court but off the court as well,” she continued. “… She’s a really caring person and she’s an awesome coach too, and I’m really excited to go play for her.”