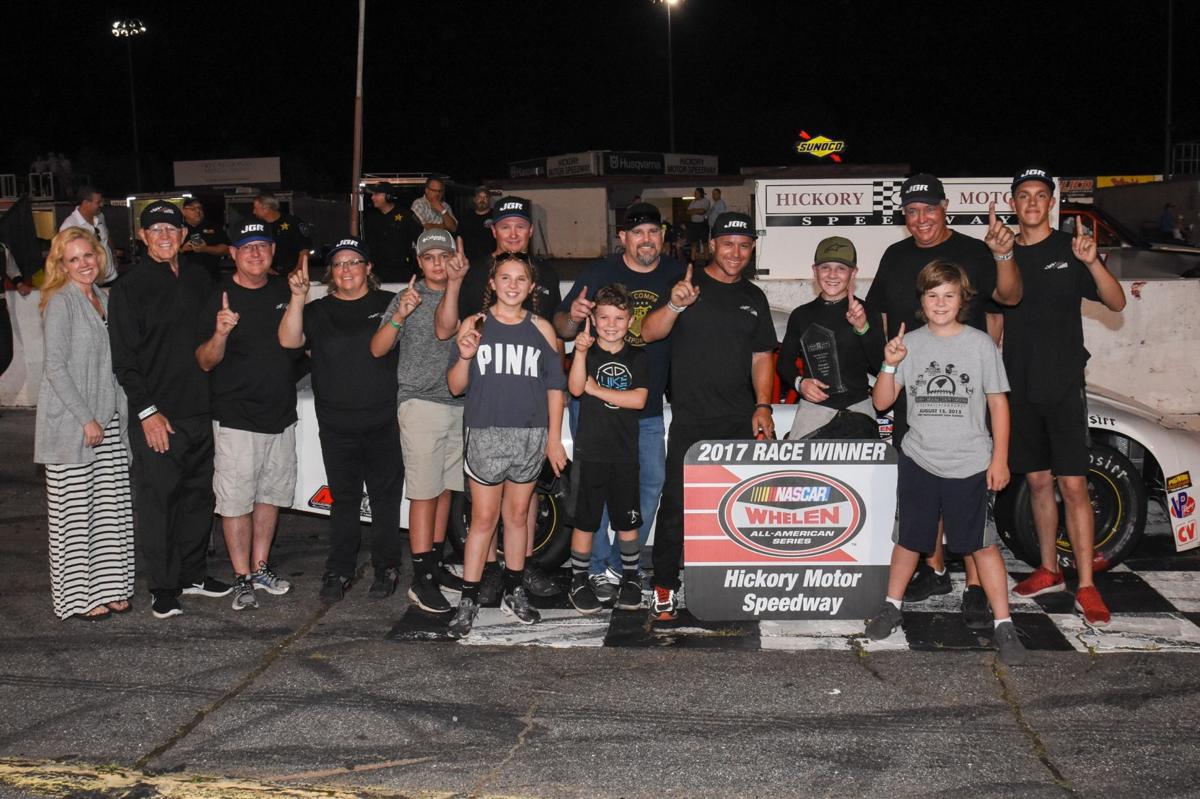 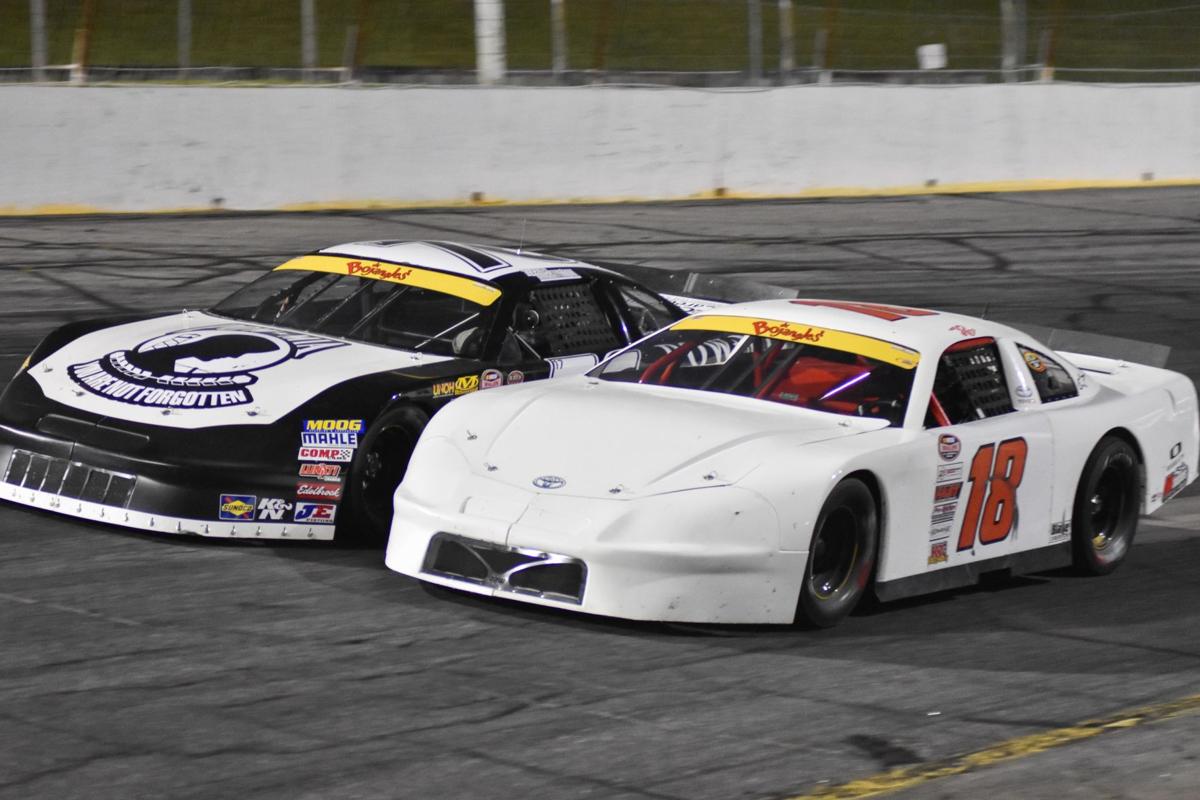 HICKORY – The NASCAR Whelen All-American Series and Hickory Motor Speedway returned to action Saturday night with Woodforest Bank Night at the Races after the annual All-Star weekend off, according to a press release.

Ryan Millington (76) grabbed the pole position in qualifying with Ty Gibbs (18) starting to his outside in the first race of twin 40-lap features, according to the release.

Millington jumped to an early lead as Gibbs fell back and eventually stopped at pit road with a flat right rear tire.

Landon Huffman (1) moved up to second and made a bid for the top spot, but Charlie Watson (9) joined the fray and moved around Huffman.

Watson got close, but Millington held him off for another victory on the season.

Eddie Gilbert (95) started from the top spot, and Bill Webb (16) was to his outside in the 25-lap feature, according to a release.

Gilbert jumped to an early lead as Webb rode patiently for a shot at the top spot.

Bill Lett (4) started from the rear, as is the custom for the previous winner of the Classic Sportsmen series, but climbed through the field to the bumper of leader Gilbert.

The pair battled for the win, and Gilbert came out victorious.

Mitch Walker (29) claimed the pole position with Monty Cox (21) to his outside in the Paramount Auto Group Limited Late Models 50-lap race, according to the release.

Walker made an early move for the lead, but Cox wouldn’t settle for the second spot. He muscled past Walker to pace the field from the front.

Jeremy Pelfrey (51) started fifth. Pelfrey made it past Walker for second, and a caution with 15 laps to go bunched the front runners.

Pelfrey worked his way around Cox as the pair dueled 10 laps side-by-side. Another caution flew with 45 laps on the board. The field was bunched and Pelfrey chose to restart on the high side which worked to his advantage 10 laps ago.

Cox was ready, however, and used the low line to move back around Pelfrey for the win.

Cody DeMarmels (18) rolled off from the top spot with Mark Whitten (77) to his outside in the 35-lap feature, according to the release.

DeMarmels had a good start and pulled away from the pack while Whitten, Kevin Eby (03), Marshall Sutton (64), and Carroll McKinney (16) battled for top positions.

Whitten eventually grabbed the second spot and gave chase to DeMarmels while Sutton and Eby swapped the third spot repeatedly with McKinney hot in their tracks.

DeMarmels held on for the win.

After suffering some bad luck with a flat tire in the first 40-lap feature, Ty Gibbs (18) grabbed the pole with some luck with Annabeth Barnes-Crum (4) to his outside, according to the release.

After a couple of attempts, Gibbs grabbed the top spot and tried to put some distance on his competitors.

Ryan Millington (76) made quick work getting through the field and reached the bumper of the leader.

Around lap 15, Millington worked his way back to the point moving around Gibbs. The pair raced nose-to-tail for the next 15 laps.

On lap 30, Gibbs decided to turn the tide and look under Millington for the lead once again.

The pair swapped the top spot for the next five laps until Gibbs finally squeaked ahead.

Gibbs won by a car length and grabbed his first win at Hickory Motor Speedway.

Joey Shuryan (30) won the pole position for the 35-lap feature with Allen Huffman (51) starting to his inside, according to the release.

Huffman had trouble early but had no major damage. The restart saw Shuryan choosing the outside line with 2016 HMS Super Trucks champion Sheflon Clay (15) to his inside.

After early problems and a spin, Huffman methodically worked his way back through the field to find him running second to Clay.

Clay held on for the win and took his truck back to Victory Lane.

After battling some health concerns earlier in the year, a Hickory Motor Speedway favorite, Greg Austin, was back in action with the rowdy gang driving in the organized bedlam 10-lap crash-fest, according to a release.

All the favorites were back, including the limo, the cowboy mobile, a four-door Chevy that sounds like a top fuel dragster, plus a couple of minivans, and other grocery getters.

Greg Austin in the Big G/It’s Showtime Mini-Van pulled away, but the Chevy (7) was making a familiar roar toward the front.

Austin was not denied, however, and he headed to Victory Lane.

Next week, one of the biggest fan-favorite events of the year, the Knights of Destruction, returns to Hickory Motor Speedway.

New View Builders & Remodeling If you'er building your dream home or doing that remodeling you have been dreaming of, let us help you get that new view! Give us a call for all your building & home improvement needs. 828-338-3959