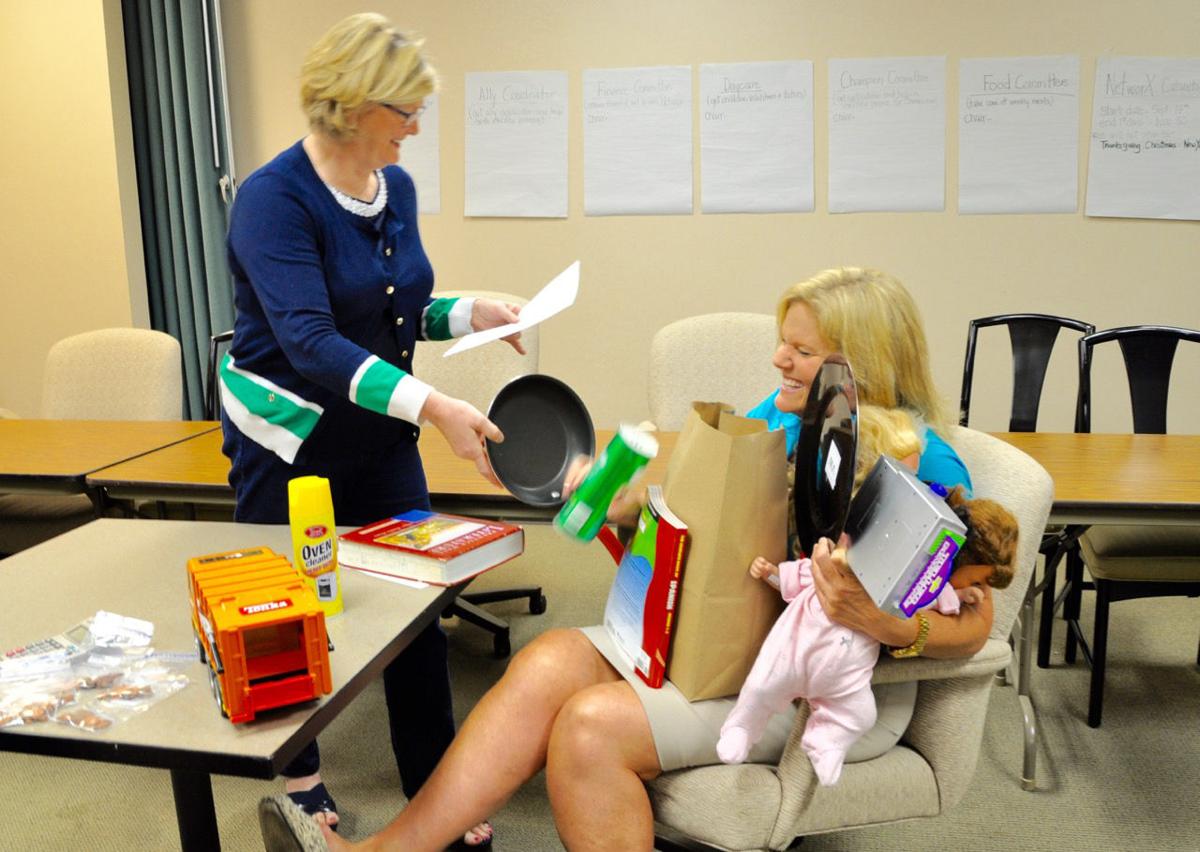 NETworX director Rev. Nancy Griswold and GHCCM director Barbara Rush do an exercise designed to illustrate how hard it is to juggle work, car problems, daycare and night school if you are low-income and have no safety net to handle crises. 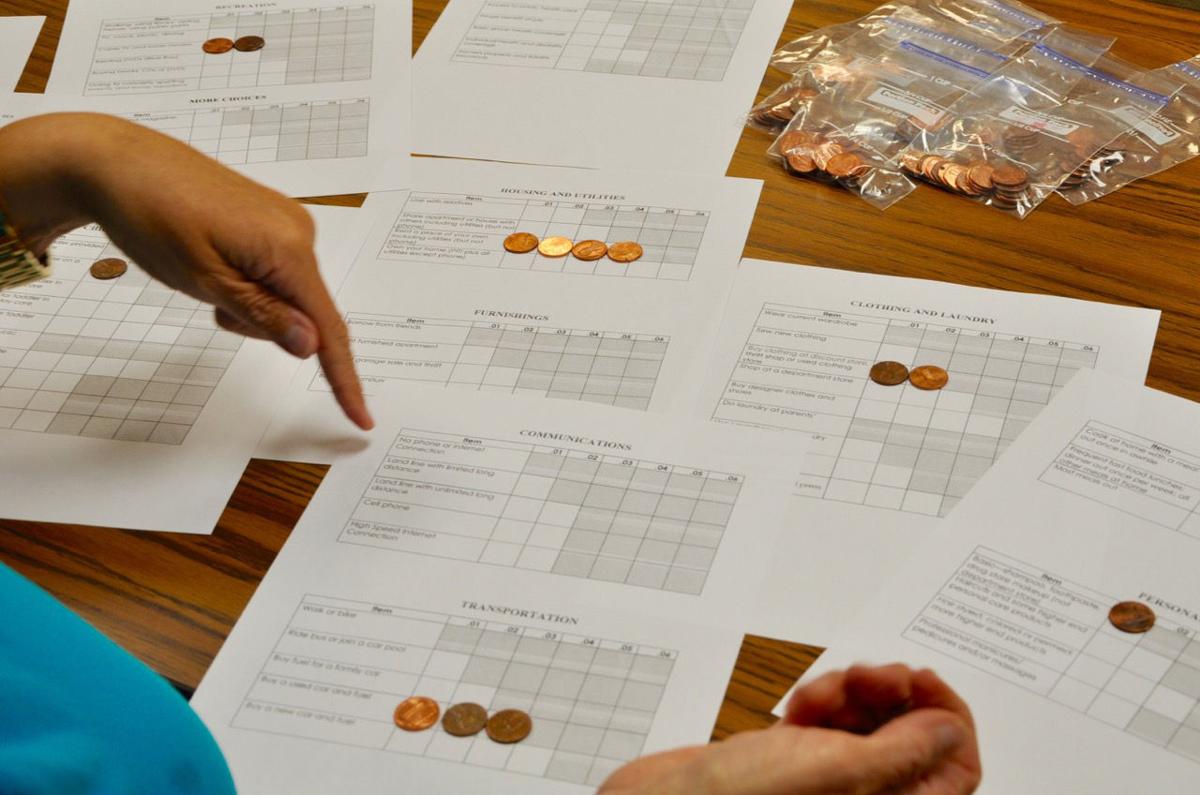 NETworX is designed to bring people from different socioeconomic backgrounds together in order to help families break the cycle of poverty. Here, GHCCM director Barbara Rush completes a budgeting exercise.

NETworX director Rev. Nancy Griswold and GHCCM director Barbara Rush do an exercise designed to illustrate how hard it is to juggle work, car problems, daycare and night school if you are low-income and have no safety net to handle crises.

NETworX is designed to bring people from different socioeconomic backgrounds together in order to help families break the cycle of poverty. Here, GHCCM director Barbara Rush completes a budgeting exercise.

HICKORY, N.C. — Crystal Roberts didn’t just suddenly become poor. It happened gradually, almost imperceptibly, one bad turn after another, until one day Roberts was in a situation she couldn’t get out of.

“We were broke,” Roberts said. “We were about to lose my trailer, we didn’t have transportation – it was falling apart. And we couldn’t find stable work. I couldn’t even afford to buy (my daughter) diapers, so it made me feel very scared.”

It was hard to turn her life around after leaving an abusive husband, became harder still when she dropped out of school and made almost impossible when the recession hit and she had two young girls to feed. In 2012, Roberts and had $150 a month coming in from social security and little else. Rent for the trailer was $440 a month. She was already way behind. Nothing was left for transportation, daycare or food.

Roberts’ story isn’t unique. Approximately 20 percent of the population in Catawba County lives in poverty – that’s nearly 23,000 people and 8,200 children. That rate that has doubled in the past 15 years.

But Roberts is no longer going to be one of those statistics. Three years ago, she was one of the first graduates of a program designed to move families out of poverty and towards self-sufficiency. That initiative, called Burke County Circles, has been so successful that Greater Hickory Cooperative Christian Ministry is launching a similar program in Catawba County called NETworX CATAWBA.

NETworX is a faith-based program with one goal: to help families break the cycle of poverty.

The first step? Bust the myth that low-income families are poor because they’re lazy.

“We think it’s a very simple solution to a complex problem. And it’s not a short-term fix, it’s a long-term one,” said GHCCM director Barbara Rush.

To do this, NETworX brings together members of the community who are middle class (called “Allies”) and members of the community who are low-income (called “Champions of Change”). They meet weekly over the course of several months to talk about budgeting, learn about the root causes of poverty and forge relationships. Allies and Champions often go on to maintain those friendships for years to come. But it’s crucial to the success of the program that the middle- or upper-class Allies suspend their judgment and come to understand why families can remain stuck in persistent poverty.

“If I lose my job, I know I can borrow some money from mom or get a line of credit,” said Rush. But living in true poverty is “living with chronic, constant stress and anxiety,” she said.

“They truly are living one day to the next.”

Roberts explains that the cycle of poverty isn't just about lacking financial resources. What really trapped Roberts was not having the network of social resources that are the safety net for a family in crisis. Family members she could call on to give her a ride or watch the kids in a pinch. Friends who knew how to open a bank account or file taxes or find a copy of their birth certificate. She even lacked time – the investment it took to go to college and learn a trade skill was a luxury when you are spending each paycheck as soon as you get it.

“I gave up on a lot. I gave up on school. I gave up on family and friends,” Roberts said. “When you’re beat down so much, you just take it. You’re just like ‘OK, this is another day. I’ll call DSS again to try to figure out something to pay the power bill or whatever the situation.’ I was living in that moment, like, ‘I’ll figure it out.’ But I wasn’t.”

Roberts said she was highly skeptical of the Burke program. But the program gets rid of all barriers by providing meals, childcare, transportation and tutoring for participating families. Through the initial 15-week course, Roberts learned tips for budgeting and shopping, made friends and got a part-time job at a daycare.

Little by little, she and her husband began righting the ship.

A friend in the program asissted Roberts' husband with the intense application process for a government job. Roberts saved up enough money to buy a car through a grant that matched their contribution three to one. They began putting in the volunteer hours they needed for a Habitat for Humanity house.

"It does take a lot of dedication," Roberts said. "You’ve got to want to change. You've got to want to get a job and go back to school and do the things you need to do to do better. I’m not going to lie, some people are happy right where they’re at, and we weren’t."

According to the national Circles organization, which NETworX is based on, participants increased their income an average of 28 percent after the initial program. The longer they stayed in the program, the more their income rises.

The program also focuses on emotional and spiritual improvement. During meetings, people from wildly different socioeconomic backgrounds open up about everything from their financial situation to past traumas.

“Trauma is part of this program,” Rush said. “Trauma is so entrenched in who we are and if we don’t talk about and address and heal trauma, it’s one of the things I think is hugely important about this program that we miss.”

Roberts opened up to people in the Burke program about the sexual abuse her eldest daughter suffered at the hands of her ex-husband. They eventually helped her get justice in court.

“All that’s in our past now, but having the support from the people meant so much,” Roberts said. “I didn’t have to go through it alone. It was the fact that I could call one person and say, ‘Who do I need to talk to at DSS?’ and they say specifically, ‘Call this woman and she’ll help you.’”

Patti Pardue, a facilitator at the Burke program, says she has "never seen a program quite like it." They're now trying to get graduates like Roberts onto local governing boards.

“There are some things that the county and state does that are not helpful at all – in fact, they would almost hinder you,” Pardue said. “Who better to learn it from than somebody who’s walked in poverty?”

Through Circles, Roberts’ husband landed that job with the city of Morganton, which Roberts called "the best thing ever." They are about to break ground on their Habitat for Humanity home. And Roberts can even afford small niceties for their daughters – something that seemed impossible just three years ago.

“When we were broke, we couldn’t even buy them a pack of gum,” Roberts said. “So now to be like, ‘You can get your snack and a drink and that’s fine’ – it’s not big items, but it’s the point that I don’t have to tell them no every time.”

Roberts is also going back to school to finish those last seven credits for her associate’s degree. She hopes to become a children's counselor one day. But what she looks forward to the most is becoming an Ally for another family in the Catawba County program.

That would mean she’s finally broken the cycle.

“I sometimes feel like I’m a completely different person,” Roberts said. “I was a very sad, depressed, unhappy person then – I cried a lot. And now I’m not. I’m happy with everything that I’ve done and who I am. And we just keep doing it. Every day – we just keep moving on forward.

NETworX is a multi-dimensional model for reducing poverty. It's based on national research suggesting that low-income families must have a support system of relationships across economic and class lines to access resources in the community to move toward self-sufficiency. NETworX CATAWBA is a collaborative effort between GHCCM and local churches, civic leaders and community government partners.

Upon acceptance into NETworX CATAWBA, each participant (known as a Champion of Change) goes through a 12-week program designed to help them begin their transition out of poverty. They work with trained Allies, who are community volunteers, over the next 18-24 months.

If you know an individual or family who would like to apply to participate, contact Alice W. Horton at Great Hickory Cooperative Christian Ministry at 828-327-0979, ext. 227 or email acwhitener@ccmhickory.com.

HOW CAN I HELP?

NETworX is looking for Allies to help participating families break the cycle of poverty by creating relationships that cross socioeconomic lines.

If you can’t commit to be an Ally, you can help in other ways:

> Sponsor a scholarship for a participating family. It costs $500 to get each family through the program. NETworX is asking churches, businesses or individuals to consider donating half or full scholarships.

> Volunteer at weekly meetings by: