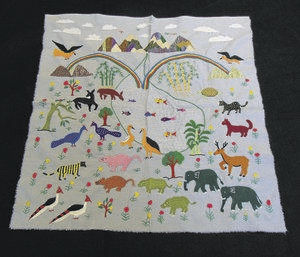 SUBMITTED: A story cloth brought in for the recent Catawba County Library’s call for Hmong cultural items, came from Thailand. 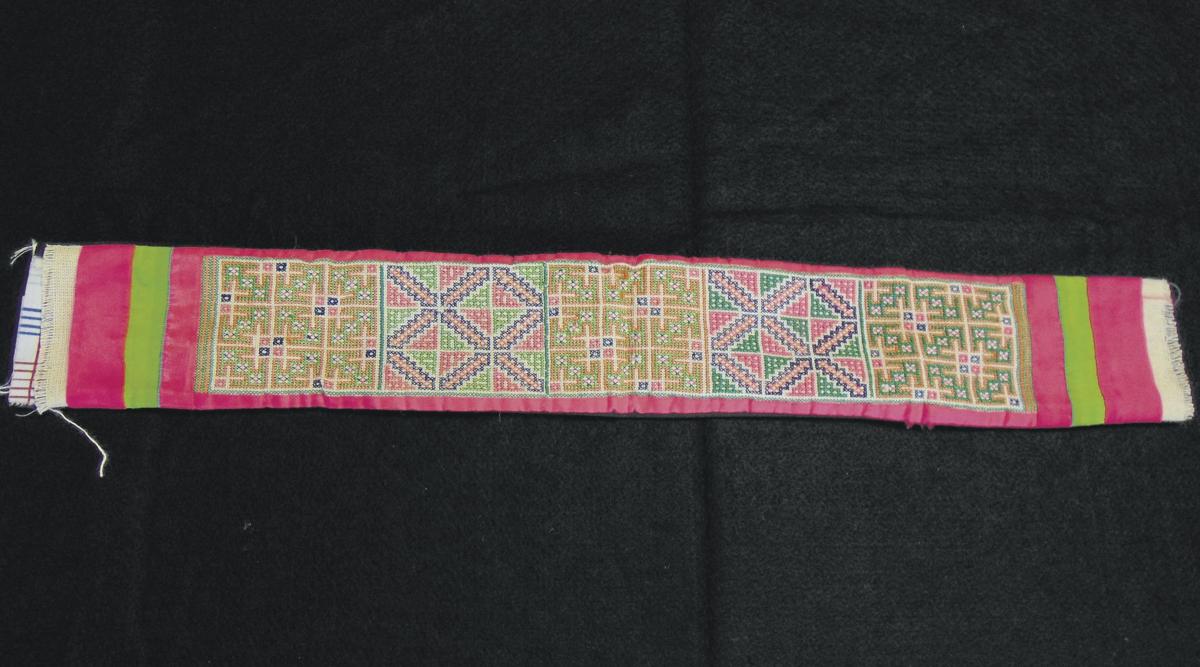 SUBMITTED: This hand stitched waist belt was like a cross stitch sampler that was used to teach cross stitch brought in during Catawba County Library’s call for Hmong cultural items. 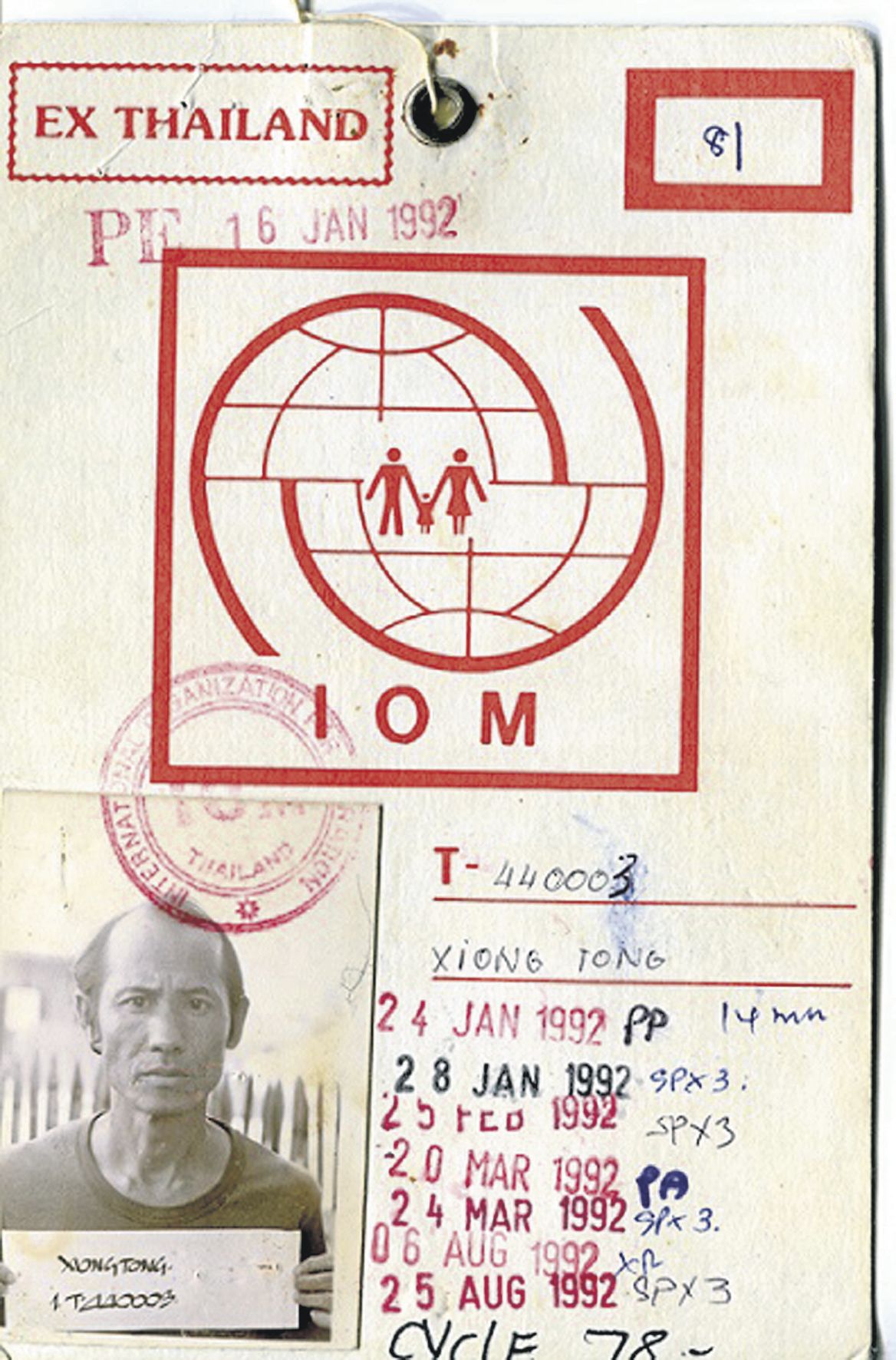 SUBMITTED: Xiong Tong brought in his refugee card he used in 1992 as a passport allowing travel between countries for the Catawba County Library’s recent call for Hmong cultural items.

SUBMITTED: A story cloth brought in for the recent Catawba County Library’s call for Hmong cultural items, came from Thailand.

SUBMITTED: This hand stitched waist belt was like a cross stitch sampler that was used to teach cross stitch brought in during Catawba County Library’s call for Hmong cultural items.

SUBMITTED: Xiong Tong brought in his refugee card he used in 1992 as a passport allowing travel between countries for the Catawba County Library’s recent call for Hmong cultural items.

NEWTON — Siobhan Loendorf’s eyes lit up when she pulled up the image of a Hmong travel document on the computer screen in front of her.

“It looks like a little luggage tag, but this is an actual copy of (Xiong Tong’s) passport when he came from Thailand to America (in 1992),” the Catawba County Assistant Library Director said. “It just has a string and that’s just that manila card stock, and he and his family saved all theirs in really good order, but a lot of people threw theirs away or they got ruined.”

It was one of dozens of items brought in by three area Hmong families to be catalogued by the Library on Feb. 24.

The county library — through a National Endowment for the Humanities (NEH) grant and partnerships with the Historical Association of Catawba County (HACC) and the Digital Heritage Center of NC — put out a call to collect items representing the area Hmong community’s cultural heritage so it could be scanned and preserved for education and research through digital technology.

The library will hold another collection day this Saturday at its St. Stephens branch from 10 a.m.-2 p.m. and a third on April 21 at its Conover branch.

Houa Yang is the project lead and library assistant at the Sherrills Ford branch, and a Hmong.

She was born in a refugee camp in Thailand, and her family immigrated to the United States when she was a year old in 1987.

“I feel like our roots are slowly being forgotten, and so this is just a really great way to preserve it for future generations,” Yang said.

Hmong people generally come from the hill and mountain area just south of China, according to hmongculture.net. They lived in China for 2,000 years before generally migrating south in the 1700s. Most Hmong in the United States come from Laos, but they come from Thailand, Vietnam and China as well. Many fled to the United States during and after the Vietnam War. Hmong people have their own language in a couple different styles of dialect.

The first generation of Hmong immigrants are getting older, and Yang worries the culture and even the language could be lost when they pass away.

“I keep thinking about my grandmother. She had all this information about medicinal herbs that just died with her when she passed away,” Yang said. “The embroidery and stitching, we’re not going to know how to do that because we’re going to go to the mall to purchase our clothing.”

And unlike other immigrants, the Hmong don’t have their own country they can turn back to as a point of reference for their culture.

“It’s such a huge part of our community that our museum collection should reflect that,” Loendorf said.

Until she started working for the library, Loendorf admits she didn’t know much about the area Hmong community.

The idea to create the collection came from a conversation with HACC Executive Director Amber Clawson Albert, who identified a grant opportunity and asked if the library wanted to help come up with an idea for the Common Heritage Grant.

The purpose was to digitize a community’s heritage, and Albert realized the History Museum of Catawba County only had three items representing the Hmong culture.

“Hmong community members share their stories of loss, struggle and community-building through the objects and images that mean the most to them,” Albert said. “They have contributed so much to Catawban culture. That’s really what initially inspired the grant application.”

Yang never imagined she’d be involved with a project like this.

“I feel like this is the first attempt to preserve and curate the Hmong culture in North Carolina,” she said. “In Minnesota, there’s such a big population up there, too, and they have this Hmong museum, but their story is completely different from the Hmong who live here.”

Along with items to be photographed, Hmong families were given an opportunity to share their personal stories, oral histories through video recordings.

Once the project is completed all the information gathered will be posted online through the Digital Heritage Center for the public to access.

John Bailey is the education reporter at the Hickory Daily Record.