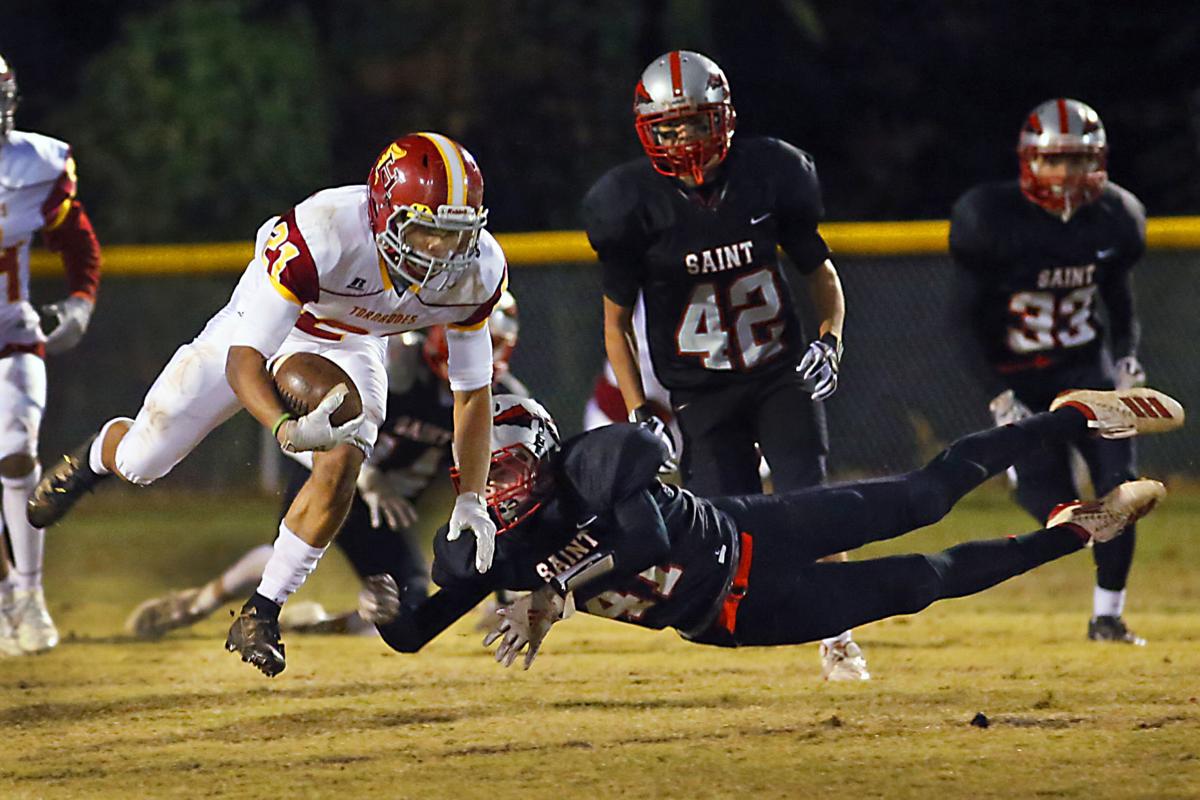 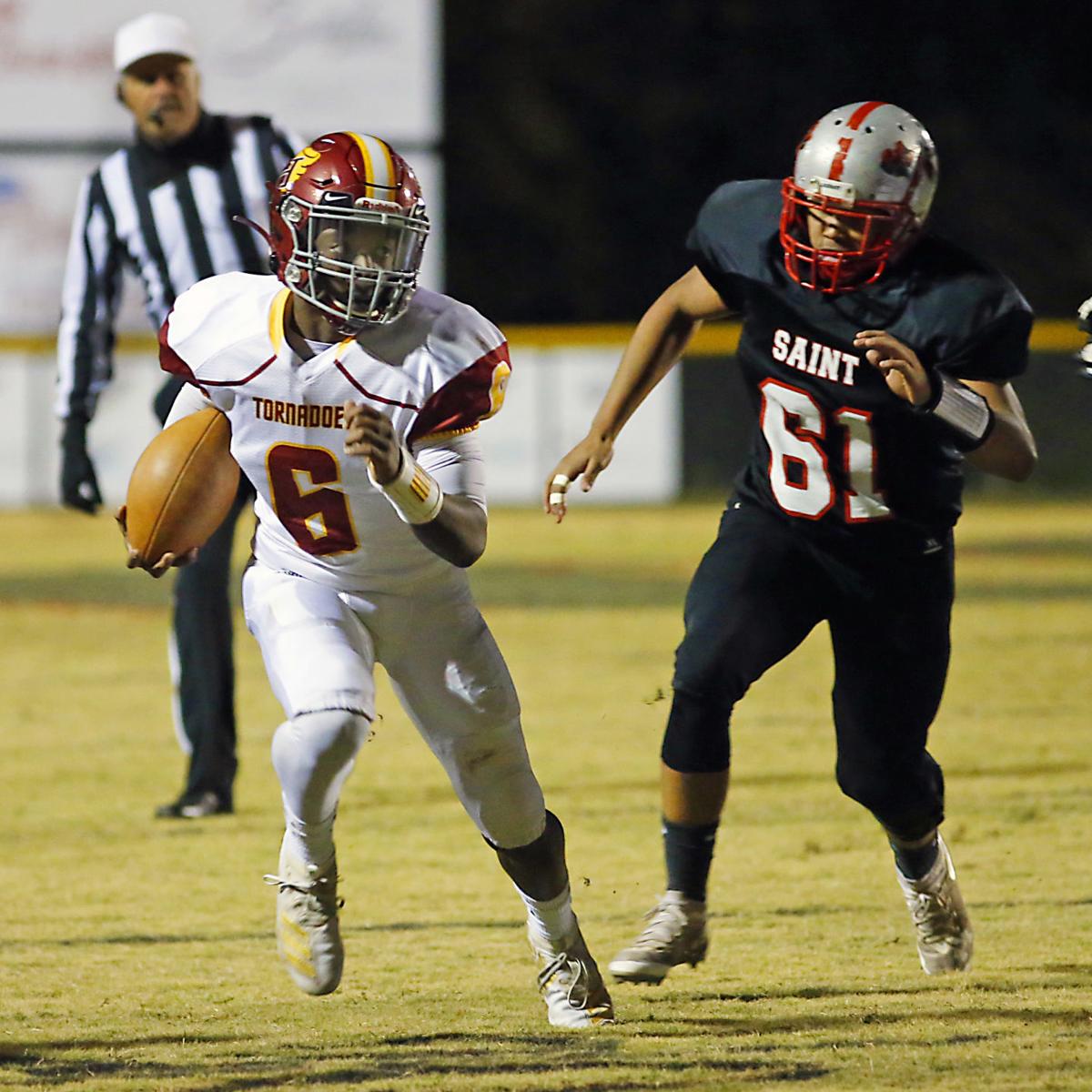 The crosstown rivalry between Hickory High and host St. Stephens always brings out the best in both schools and it did Friday night in a Northwestern 3A/4A Conference football game. With playoff implications for both schools, the game had more urgency.

With the season in the balance, Hickory turned to running back Cody Young, who scored the last of three touchdowns with just under two minutes left, and the Red Tornadoes held on for a 37-34 win over the Indians at St. Stephens Stadium.

The win placed Hickory (4-7 overall, 4-2 Northwestern Conference) in a tie for second in the conference with Freedom and Alexander Central. The conference held a drawing with Freedom winning it and getting the conference’s No. 2 seed and the automatic bid. The Cougars and Hickory received at-large bids when the North Carolina High School Athletic Association announced the final playoff brackets on Saturday. Seeded 14th in the 3A bracket, the Red Tornadoes will travel to No. 3 AC Reynolds next Friday.

The loss dropped St. Stephens (5-6, 2-4) to 70th in the final Adjusted MaxPreps rankings, which was enough to leave the Indians out of the playoffs.

Young and Indians running back Zak McLauchlin were the focal points of the two offenses that combined for 821 yards of total offense (all stats unofficial), 693 of it on the ground.

Hickory spent a good portion of the second half without starting quarterback X’zayvion Huitt, which made Young the only true option for the Red Tornadoes. Young ended up with 271 yards on 32 carries. Part of that came out of the wildcat formation, as Hickory pondered what to do after the fourth starting quarterback this season went to the sideline.

“We had to use three quarterbacks tonight, but that’s the kind of year it’s been,” said Hickory’s head coach Russell Stone. “I’ve told you before and I’ll tell you again, Cody Young, to me, is the best player in the state. A lot of people have doubted him and said he’s not this or he’s not that. He’s just a great football player.”

McLauchlin carried the ball 37 times for 233 yards with teammate Matthew Hancock chipping in for 94 yards on 17 rushes.

“I’m proud of our offensive line, too,” said Indians coach Wayne Hicks. “Zak’s got a heart bigger than his body. He plays with everything he’s got.”

Hickory got on the board first when Huitt hit Gage Lackey on a slant for a 32-yard touchdown pass. Ben Boston’s kick made it 7-0 in the opening quarter.

The Indians responded with a nine-play drive that ended with McLauchlin’s run from the 1-yard line. St. Stephens was forced to go for 2-point conversions in the game due to the absence of kicker Chance Yang, who was hurt during the Indians’ soccer match on Wednesday. McLauchlin caught a pass from Connor Williams to make it 8-7.

After a short reprieve, the offenses kicked up again in the second quarter with Young sprinting 31 yards for a touchdown that put Hickory back ahead 14-8. But a 14-play, 77-yard drive took up over six minutes with McLauchlin scoring the touchdown from the 2 and adding another 2-point conversion.

The second half was back and forth, which each team scoring on its first three possessions. St. Stephens started the parade with an eight-play, 62-yard drive with Williams bulling in from the 2 for the score.

On what was to have been a reverse, according to Stone, Huitt scrambled out of a tackle near the line of scrimmage before finding open field in a 78-yard scoring run. Young ran the 2-point conversion to tie the game at 22-22.

The Indians returned fire on a 76-yard drive that ended with Hancock’s 8-yard run with 5:59 left. The 2-point attempt was blown up by the Hickory defense which left St. Stephens up by six.

Playing safety on defense, Huitt came out of the game limping during the Indians’ scoring drive, which placed Young into the lineup as the quarterback for several snaps. His 26-yard run put the ball at the Indians’ 38 before sophomore Jake Tomlinson, who started the season opener at quarterback, came in to complete a pass to Malakei Sumner. Young then took care of the final 19 yards, scoring from the 7. Boston’s kick put Hickory up 29-28 with 2:11 still left in the third quarter.

However, St. Stephens methodically drove back down the field on a 13-play, 67-yard drive that covered nearly six minutes. McLauchlin scored from the 1, but the 2-point conversion was fumbled leaving St. Stephens up 34-29 with 8:08 remaining.

“I felt like we needed to try and control the ball,” said Hicks. “And keep it out of Mr. Young’s hands. He’s a special young man.”

Taking over on its 10, Hickory put together its own long-sustained march back down the field with several key moments that kept it alive. The Red Tornadoes got a break on a late hit on third down at the 9, which turned into a first down. Later, on fourth-and-3 at their 46, Young ran off left tackle for 7 yards to extend the drive. The Indians again forced a fourth down at their 38, but Young took a handoff left, then cut right for 34 yards to put Hickory in a position to score. Young did just that on the next play, then ran for the 2-point conversion to account for what turned out to be the final margin with 1:49 left.

“This was a team win,” said Stone, “Grayson Lineberger, Damien Maunz, Henry Stewart and Sebastian Parrish, they are the guys that just had to stay out there all night and fight both ways.”

St. Stephens’ last drive appeared to receive new life when Williams scrambled out of a hole and completed a pass at the 40. But the Indians were called for an ineligible man downfield and Hickory defended the ensuing fourth-down play to seal the win.

“We had some time,” said Hicks. “But they forced us out of our element with a short clock there. I’m proud of our guys. We did some good things tonight.”

Burke COVID-19 death toll rises to 15; there were 39 new virus cases this week in Catawba County

Another Burke County resident has died of complications of COVID-19.