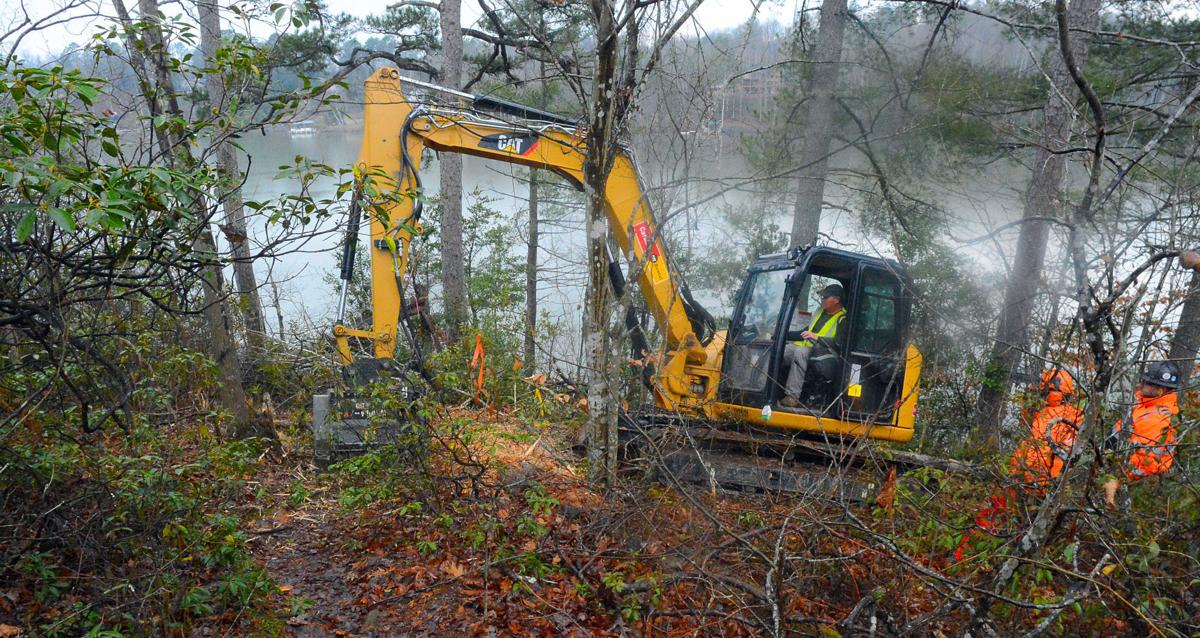 Workers with heavy equipment from Hilton Construction and Development start clearing brush along the future Riverwalk at Geitner Park. 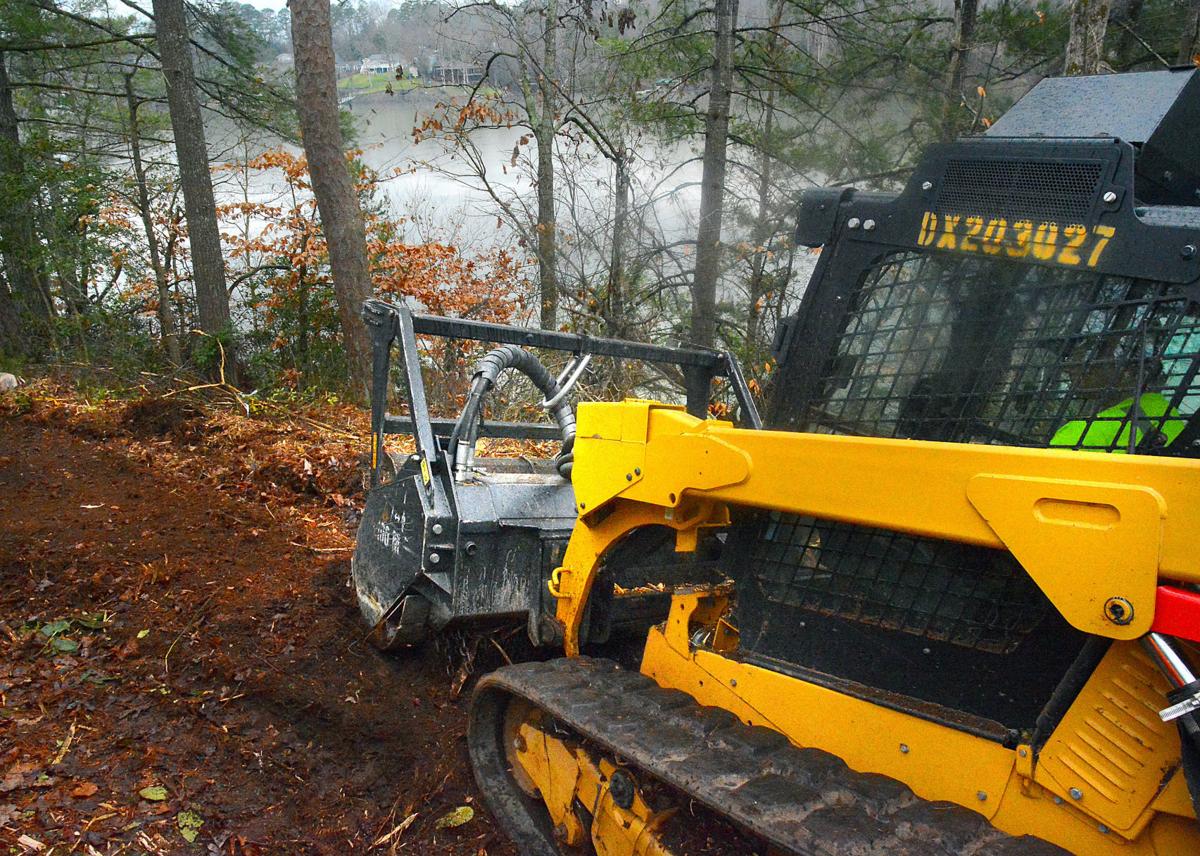 Workers from Hilton Construction and Development remove roots and undergrowth along the future Riverwalk on Lake Hickory.

Workers with heavy equipment from Hilton Construction and Development start clearing brush along the future Riverwalk at Geitner Park.

Workers from Hilton Construction and Development remove roots and undergrowth along the future Riverwalk on Lake Hickory.

Workers have started clearing land near Geitner Park, the first step in the process of creating Hickory’s Riverwalk.

Riverwalk is one of the major projects of the bond program approved by voters in 2014.

It will consist of a 10-foot-wide walking and biking path a little less than a mile long stretching from the water plant near U.S. 321 to what is now Rotary-Geitner Park, Public Services Director Kevin Greer said.

Portions of the walkway will be over the river.

The beginning of Riverwalk construction comes after the city made changes to the project to get it within budget.

The city separated the project into two bid packages, each of which came back at a little over $13 million. The cost of each of the individual bids was roughly the same as the original budget for the entire project, which Greer said was between $13 million and $14 million.

The city was able to make enough changes to get the cost of the portion funded solely by the city down to $5.9 million. David E. Looper & Co. was awarded the contract for that portion of the project.

The other segment of the project is expected to be rebid by summer.

Here’s a look at some of the big questions surrounding the Riverwalk, including the timeline of the project, how it will affect access to public parks, why the project went so far over budget and the changes the city made to get it within budget.

How long is construction expected to take?

The portion of Riverwalk that is currently underway is expected to take between 10 months and a year to complete, Greer said.

The city expects to bid the NCDOT-funded portion of the project by summer and have construction start by the fall.

How will the work affect access to the park?

Part of the Rotary-Geitner Park parking lot has already been taped off to accommodate equipment for the crews, Greer said.

The large picnic shelter at the park will likely be closed by late spring. Portions of the trails at or near the park could be closed at certain times for construction, but Greer said the trails would only close as needed for workers to do specific tasks.

The Lackey project, a collaboration between the city and the Lackey family for a new, 19-acre park at and near the site of the existing Rotary-Geitner Park, will have more effect on access to the park later this year.

Greer said construction on the Lackey project is expected to begin this summer and the entire park could be closed in the fall.

Why did the project come in over budget?

The Riverwalk work was split into two separate bids covering different sections of the project.

One section — the section closest to U.S. 321 — included $2 million of North Carolina Department of Transportation money.

The other bid, which covered the portion near Rotary-Geitner Park, was funded solely by the city.

Each of the two bids came in over budget at a little more than $13 million.

In December, the Hickory City Council voted to reject the bid for the NCDOT portion and continue negotiating with Looper for the city-funded portion. Earlier this month, the council approved the $5.9 million contract with Looper. Work on that part of the project has started.

The practical challenges of making the original design a reality was one reason the project went over budget.

“I think part of what (the designers) missed was the difficulty of construction,” Greer said. “So when it comes to building the things that they had designed, it’s not like you’re going to run up on the side of the road and be able to drop off tools and do your thing, so it’s difficult to build.”

Greer also pointed to certain design features that drove up the cost.

These included curved steel used for the over-the-water portion and the need for extensive grading and retaining walls for the land portion of the trail. Those features have been modified.

What is the city doing to get the project within budget?

The city reduced the cost of the city-funded section in part by elevating the trail off the ground.

Since the path would have been located on a hill, construction would have required a lot of grading and retaining walls to build the path, Greer said.

The new design elevates the walkway on concrete foundations, a setup that Greer said requires much less grading and allows for simpler construction.

In addition, the route of the on-land portion was changed, resulting in a slightly shorter trail.

The NCDOT portion has not been rebid yet, but designers have made some changes in hopes of reducing the cost. The curved steel of the original design was changed to straight steel beams for the over-the-water walkway. The size of the on-the-water walkway was also reduced from 12 feet wide to 10 feet wide.

What does the city hope to achieve with the Riverwalk?

The purpose of the Riverwalk is the same as that of other bond projects: economic development and population growth.

Greer said the walkway will allow people to come and experience the river and allow for more economic development opportunities in the area.

“People like being at the water, on the water, near the water,” Greer said. “It’s really that lifestyle of trying to get people close to the water because that’s where they want to be and offering that.”

I feel like there's soooooooo many other things we could've spent that money on, like tackling the homeless/addiction problem on highway 70.

so very true but hickory has never considered doing what is right,if the true facts were known this bond was voted in because the people that really didn't want did not get out and vote and for that ,the lesser class of people like myself will have to suffer through higher taxes and we are the ones that can afford it less,our town is basically divided ,veiwmont area citizens and highland area folks!