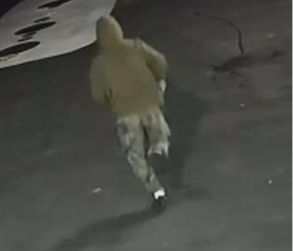 Submitted: Investigators with the Catawba County Sheriff's Office released this image of an armed robbery suspect running from the Lake Lookout Market. Authorities believe the suspect is a man.

Submitted: Investigators with the Catawba County Sheriff's Office released this image of an armed robbery suspect running from the Lake Lookout Market. Authorities believe the suspect is a man.

The Catawba County Sheriff’s Office is asking for help locating a suspect in an armed robbery at the Lake Lookout Market at the corner of Oxford School and River Bend roads.

On Sunday evening, a person wearing a skeleton mask went into the store with a handgun and stole money, according to a release from the sheriff’s office.

Investigators believe the suspect is a man with a medium build standing between 5-foot-8-inches and 5-foot-10-inches tall, according to the release.

The suspect ran away from the scene. Another person who’d just arrived at the store chased the suspect but was unable to catch him, according to the release.