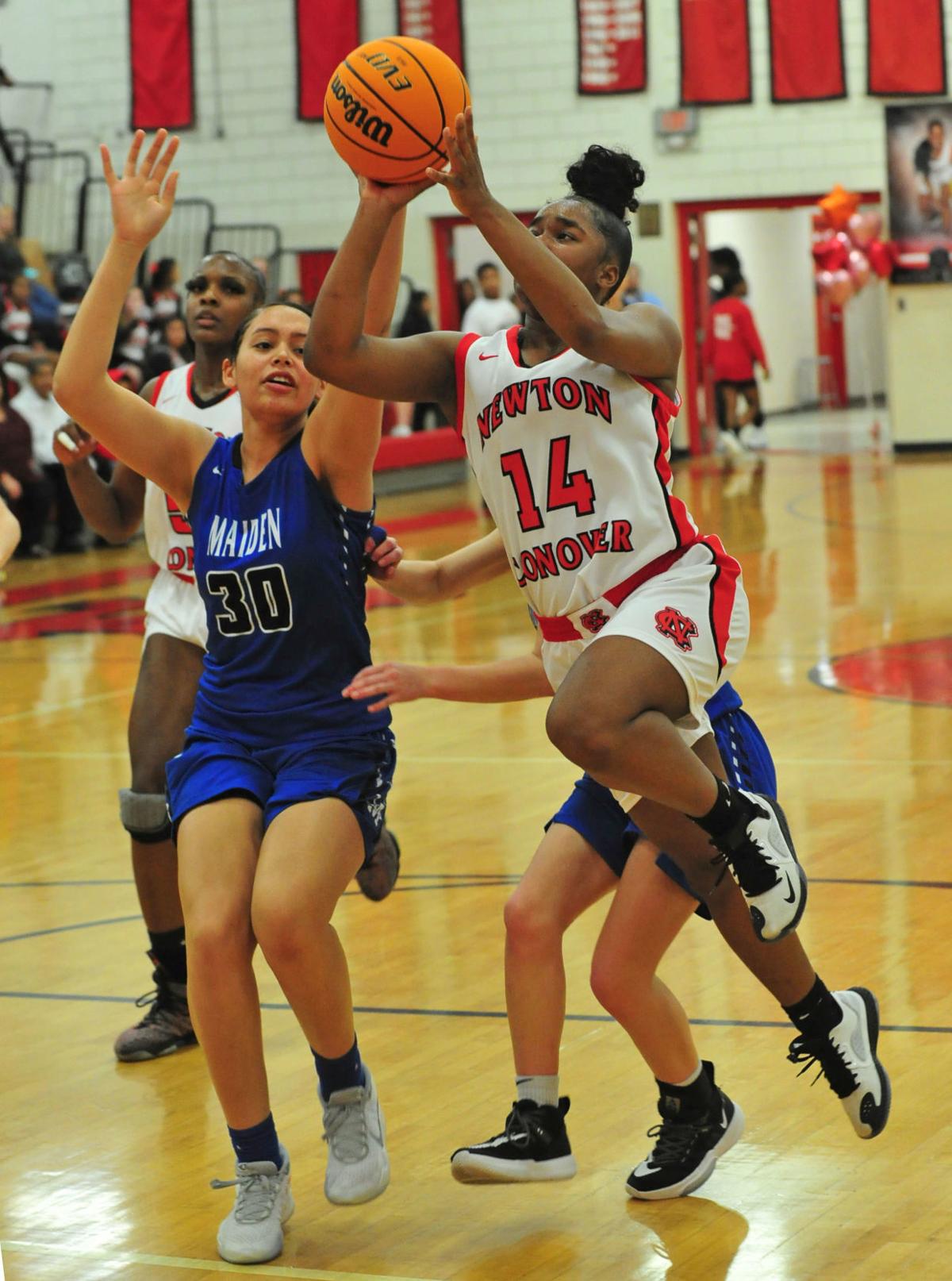 Newton-Conover's Aaliah Walton (14) gets up in the air for a shot while being guarded by Maiden's Nadia Glover (30) Tuesday in Newton. 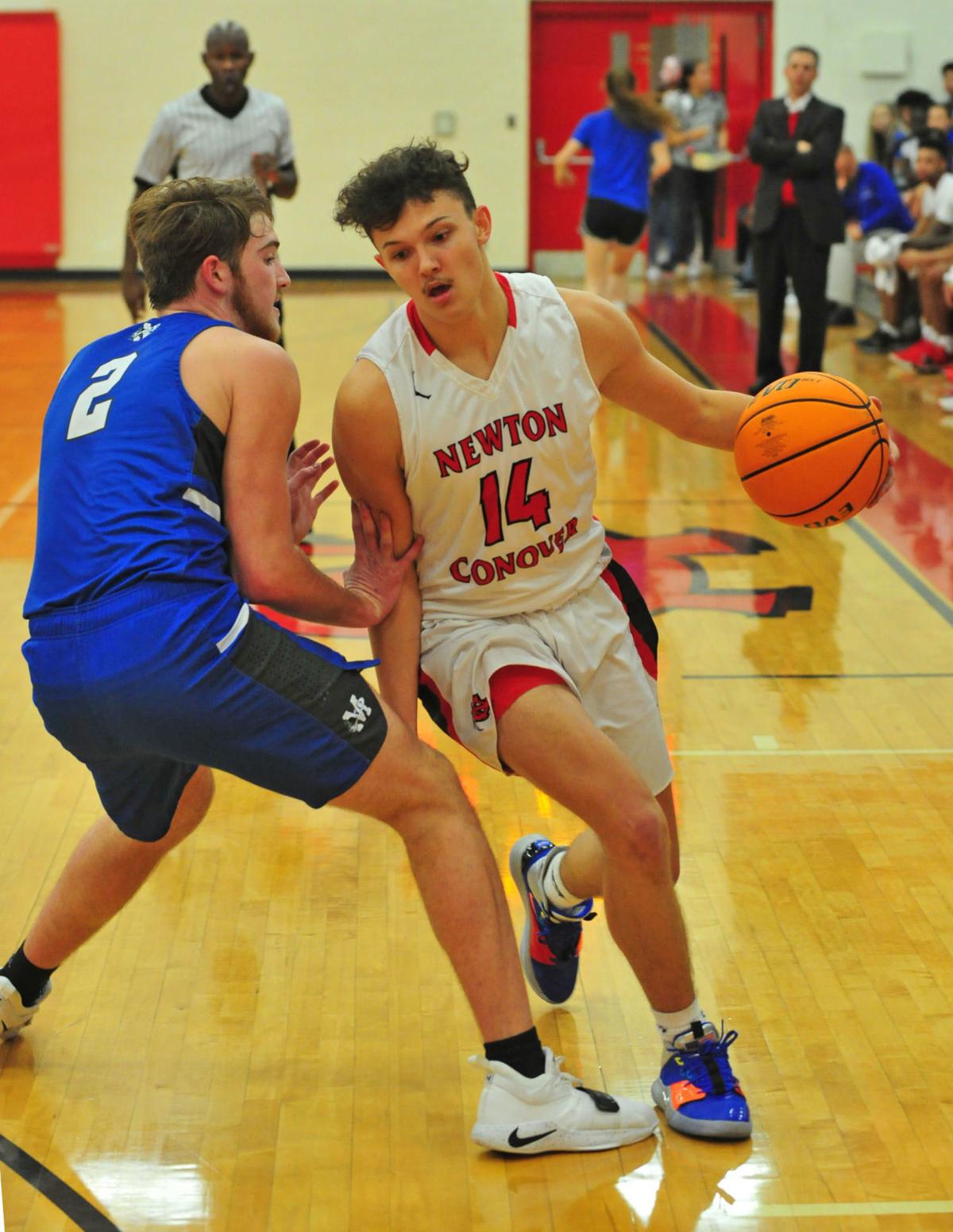 Newton-Conover's Aaliah Walton (14) gets up in the air for a shot while being guarded by Maiden's Nadia Glover (30) Tuesday in Newton.

NEWTON — Chyna Cornwell has been a double-double machine during her four years as a member of the Newton-Conover girls basketball team. Senior Night was no different for the 6-foot-3 center, who finished with 31 points and 22 rebounds in the Red Devils’ 64-24 victory over county rival Maiden on Tuesday night.

Fellow seniors Aaliah Walton, Jahlea Peters and Mackenzie Johnson were also recognized in between the varsity contests. Walton joined Cornwell in double figures with 10 points, while Peters scored four and Johnson received her first start of the season. Junior Grace Loftin rounded out the Red Devils’ starting five with nine points of her own.

“I inherited them as juniors and I knew they were great kids, but I didn’t know how hard they would work.” Newton-Conover coach Sylvia White said of her four seniors. “... But I’m gonna tell you something, our three returning seniors (Cornwell, Walton and Peters) know what it means to work, they know what it means to work together. We’ve had two goals, get better and become a team, and we added MJ (Johnson) this year to it and she has jumped right in there and multiplied it by four instead of three.

“I look out there tonight and I’m like, ‘That’s a huge hole (next season),’ but they’re Red Devils,” she added. “They just have to follow what it means to be a Red Devil — do the right things, care about your teammates, you work hard every day and you have class.”

Most of Loftin’s points came in the game’s first three and a half minutes, as she converted three layups and a free throw to give Newton-Conover (20-2, 13-0 South Fork 2A Conference) a quick 7-0 advantage. Following a Maiden timeout, the Blue Devils’ Maggie Andrews knocked down a 3-pointer, but the Red Devils countered with a 5-0 run before a triple from Cree Bass cut the hosts’ lead to 12-6 at the end of the opening quarter.

Bass also scored the first four points of the second period, banking in a jumper and turning a steal into a layup to make it a two-point game less than a minute into the frame. However, the Red Devils responded with a 16-0 run that included 11 points from Cornwell, a jumper from Loftin and a 3 from Walton. Maiden’s Maggie Sigmon finally ended the scoring run with a basket just prior to the half, but Newton-Conover carried a 28-12 lead into the intermission.

The Red Devils kept their foot on the gas in the third quarter, outscoring Maiden (11-12, 8-5) 24-5 behind six points apiece from Cornwell and Walton. Cassidy Geddes poured in five points in the period, while Peters added four and Mia Powell had three.

Newton-Conover capped the contest with 12 points in a fourth quarter that featured a running clock in the closing minutes. Cornwell scored the Red Devils’ first 10 points of the frame to reach the 30-point plateau for the fourth straight game, while a layup from Emma Fox accounted for the final basket in their 10th win of 40-plus points this season.

“I give some credit to Maiden. I don’t know if we’ve been held to 28 points in a half in a long time,” said White. “They slowed the ball down, they got some good looks and they pressured us defensively. But in the second half we came out and we got a little bit deliberate on offense and got some good execution, got some good shots. We looked inside, waited on it, went inside and then came back out, and then just got after it on defense.”

The Blue Devils were paced by 10 points from Bass, with Andrews totaling four and no other player scoring more than two.

“They screen well. They’ve got three kids on the perimeter that can shoot the ball,” said White of Maiden. “About three of them score eight points, nobody scores 20 but nobody scores one or two, so you’ve got to guard every one of them and any one night the other ones can get hot. So they’re a team that you have to defend all of them.”

After the lead changed hands multiple times in the opening minutes, the Red Devils built a six-point advantage at the end of the first quarter and continued to grow their lead as the game progressed. They led 32-11 at halftime and 49-23 through three quarters en route to a 22-point win that allowed them to remain tied with North Lincoln for third place in the South Fork 2A Conference as they prepare for a showdown with second-place East Lincoln on the road Friday.

“They’re gonna be ready for us,” Newton-Conover coach Matt Wilkinson said of the Mustangs. “We were fortunate to beat them last time, but that’s a very tough place to play.”

Now 15-8 overall and 9-4 in league play, Newton-Conover got 12 points apiece from Mathew Martinez and Keenan Guerry. Jaheim McCathern added eight points, while Jayden Roseman and Zane Redmond finished with six each on a night that began with the Red Devils’ five-player senior class of Martinez, Guerry, McCathern, Nate Chapman and Drew Danner being honored.

Playing without junior Elijah Fowler and sophomore Anthony Breland, Maiden (7-16, 3-10 South Fork 2A) got 12 points from Iziah Morgan and seven from Brennan James. Micah Haynes chipped in six points for the Blue Devils, who have lost four straight.

Newton-Conover made 11 3s in the contest compared to one for Maiden. Guerry led the way with four treys and Martinez and Roseman registered two apiece, while Haynes had the only triple for the visitors.

“We’re a good shooting team when we share the ball,” said Wilkinson. “Earlier in the season we weren’t sharing it well, but we have learned to share the ball better.”

Maiden entertains Lincolnton in its regular-season finale on Friday.