Winter Weather Advisory from 10AM EST THU until 12AM EST FRI 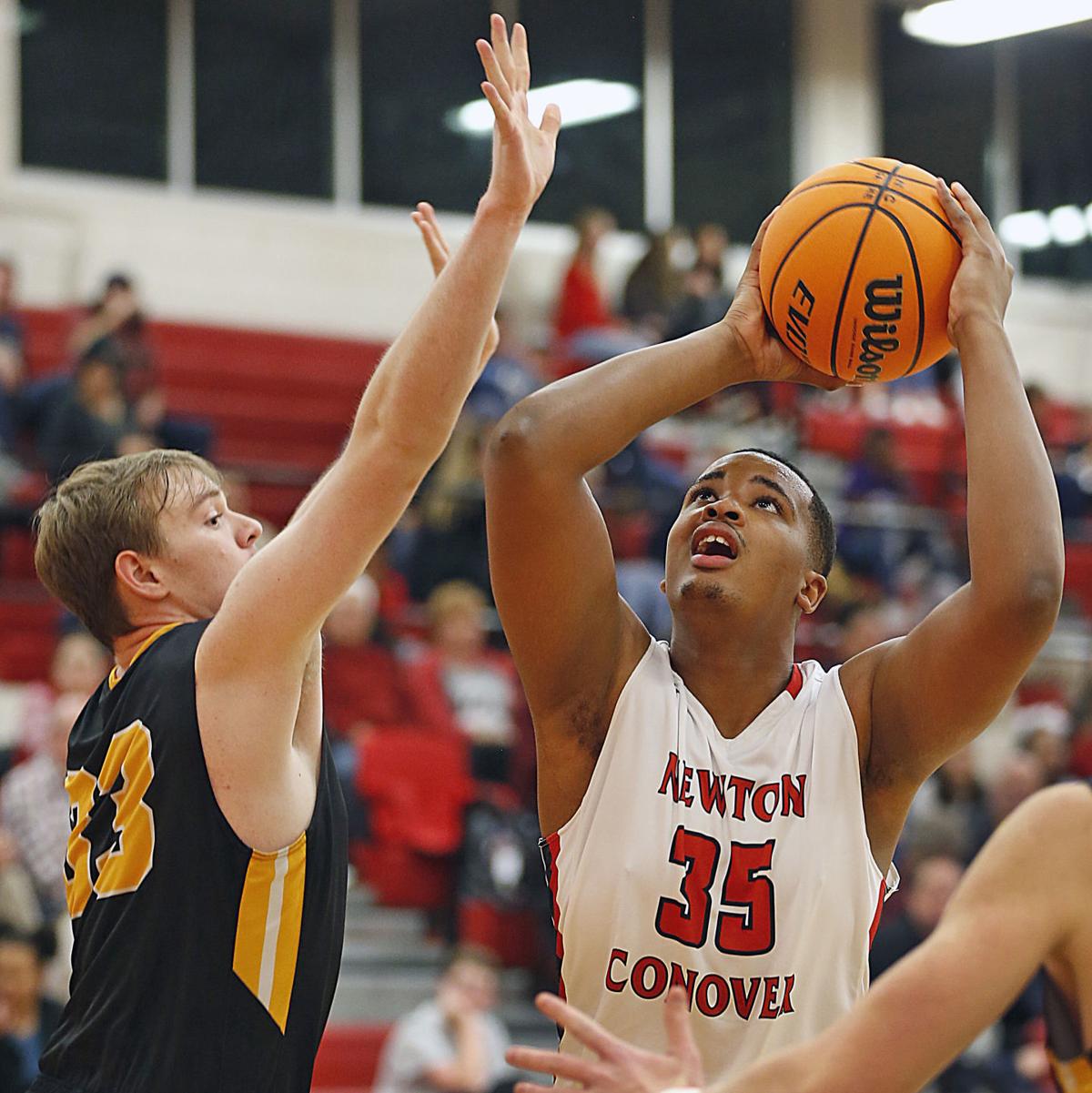 Newton-Conover’s Jaheim McCathern (35) looks to put up a shot against Lincolnton’s Ben Motz (33) during Friday night’s game in Newton. 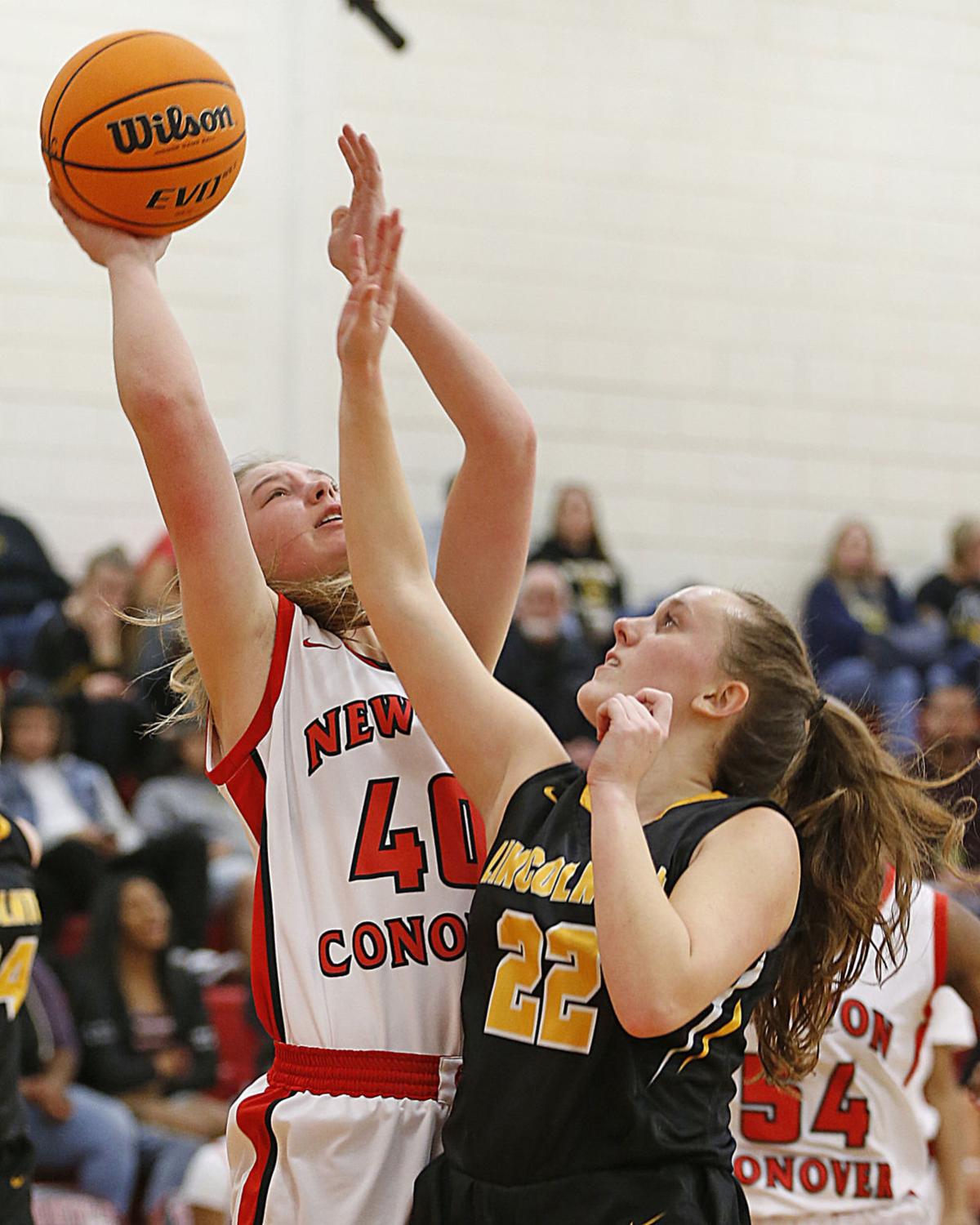 Newton-Conover’s Jaheim McCathern (35) looks to put up a shot against Lincolnton’s Ben Motz (33) during Friday night’s game in Newton.

NEWTON — The Newton-Conover boys basketball team didn’t play a flawless game on Friday night, but for three quarters, the Red Devils maintained complete control of their adversaries from Lincolnton. When all was said and done, the Wolves’ fourth-quarter run wasn’t enough as Newton-Conover collected a 76-59 win in both teams’ South Fork 2A Conference opener.

“We got a little sloppy there in the fourth quarter just turning the basketball over some, that’s something that we’ve got to continue to tighten up and improve,” he added. “But all in all, Lincolnton’s played some good basketball games this year and anytime in our conference you can get a win, it’s a good win.”

The Red Devils (5-2, 1-0 South Fork 2A) never trailed in the contest, but there was one tie. Following a layup from Newton-Conover’s Jaheim McCathern to begin the night, Lincolnton’s Amontre Finger put back his own miss to briefly knot the score at 2-all. A Nate Chapman layup restored the hosts’ lead, while a deep 3-pointer from Maverick Davis made it 7-2.

The Wolves (3-4, 0-1) answered with a 3 of their own from Finger, but Mathew Martinez and Zane Redmond got the Red Devils rolling from there. The duo combined to score Newton-Conover’s final 14 points of the opening quarter as the Red Devils built a 21-9 advantage entering the second period.

Newton-Conover continued to push the pace in the second quarter, with Martinez knocking down his third and fourth triples of the game and six Red Devils scoring in the frame. By halftime, Newton-Conover had nearly doubled Lincolnton up at 45-23.

After the Red Devils increased their lead to 63-34 at the end of the third quarter, they got loose with the ball in the fourth. Newton-Conover turned the ball over time after time, allowing the Wolves to put together a pair of 7-0 spurts. Lincolnton got as close as 72-55 following Finger’s right-wing trey with 1:40 remaining, but the Red Devils were able to stave off the visitors down the stretch as they won by that same 17-point margin.

“It’s huge, especially playing here at home,” said Wilkinson of winning the conference opener. “You’ve got to take care of your home-court advantage and you always want to get a good start in the conference before you have the Christmas tournaments, so we knew that tonight was a big one. If we want to achieve some of the goals that we’ve set, you’ve got to be able to take care of business at home, so I’m very pleased to get a win.”

Davis Grooms matched Redmond with 18 points to lead the Wolves, while Finger chipped in 16. Connor Williams reached double figures as well with 13 points.

“We’ve got a balanced team. I’ve told these guys that I’ve never coached a team that honestly we could have a different leading scorer every single night, but we’ve got a deep team,” said Wilkinson. “… We have a balanced attack, it’s one of our advantages. Over the course of the year, our depth has kind of worn teams down, especially there in the second half as the game’s gone on.”

Newton-Conover hosts nonconference Mountain Heritage in a Coaches vs. Cancer game on Monday at 1 p.m. before turning its attention to the 33rd annual Dick’s Sporting Goods Classic beginning next Friday at Catawba Valley Community College. The Red Devils will face Bunker Hill in the first round at 11:30 a.m.

The Red Devils held the Wolves scoreless for over six minutes to begin their South Fork 2A Conference opener, staking themselves to a 16-0 lead in the process. They led 22-4 at the end of the first quarter, 32-10 at halftime and 43-15 through three periods en route to their fifth straight win.

Lincolnton (0-6, 0-1) was led by eight points from Haley Morris and five apiece from Allie Blackburn and Diamond Ross. However, the Wolves missed both of their free-throw attempts as compared to Newton-Conover’s 15-for-26 (57.7%) performance at the charity stripe.

The Red Devils reached the bonus in the final minute of the first quarter and entered the double bonus at the 4:48 mark of the second period. They forced Lincolnton’s Mackenzie Sand-Odom and Moriah Ross to foul out in the second half.

Currently the state’s fifth-ranked 2A team according to MaxPreps.com, Newton-Conover returns to action against St. Stephens in the opening round of the Dick’s Sporting Goods Classic next Friday at CVCC. Tip-off between the county rivals is scheduled for 10 a.m.