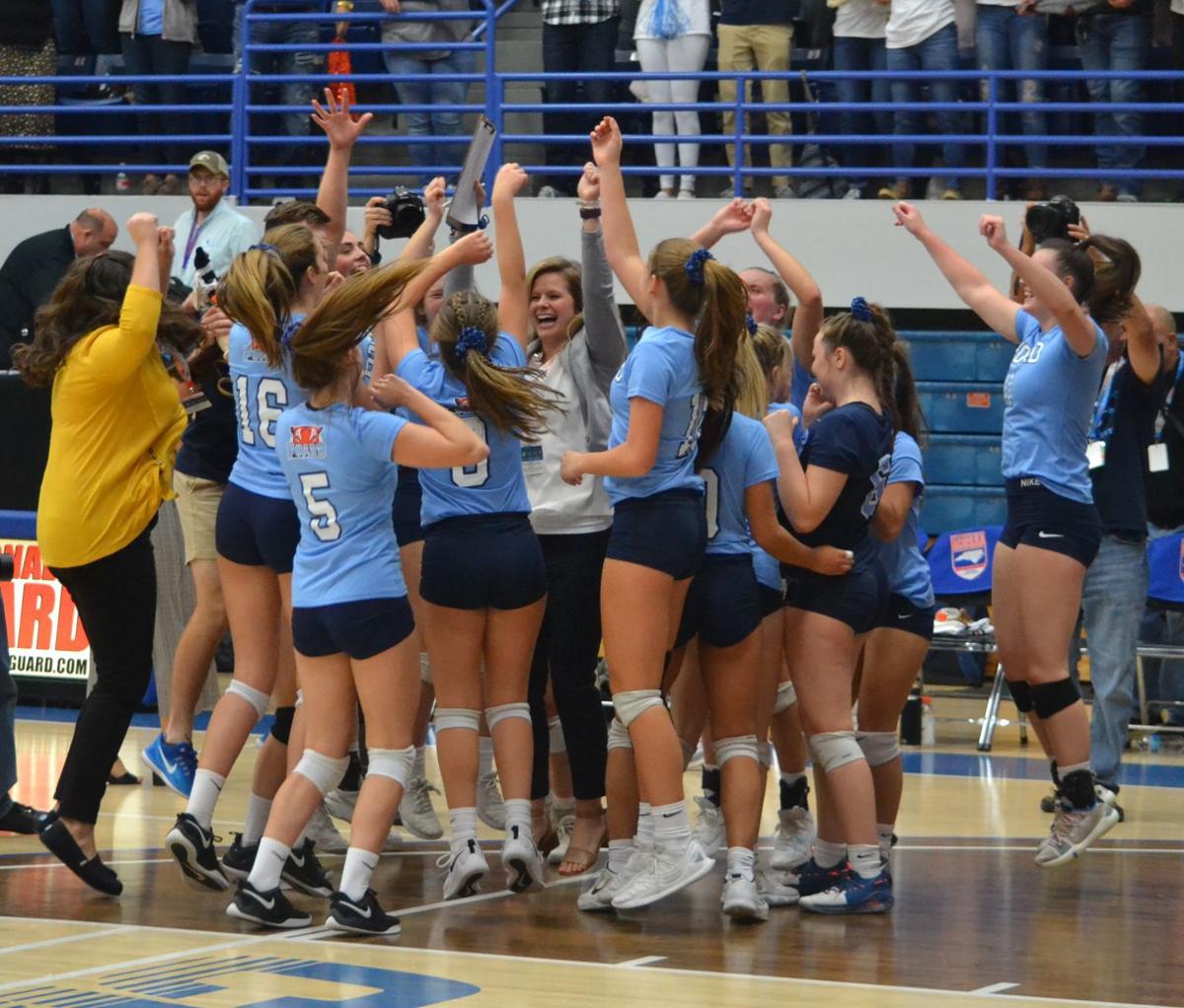 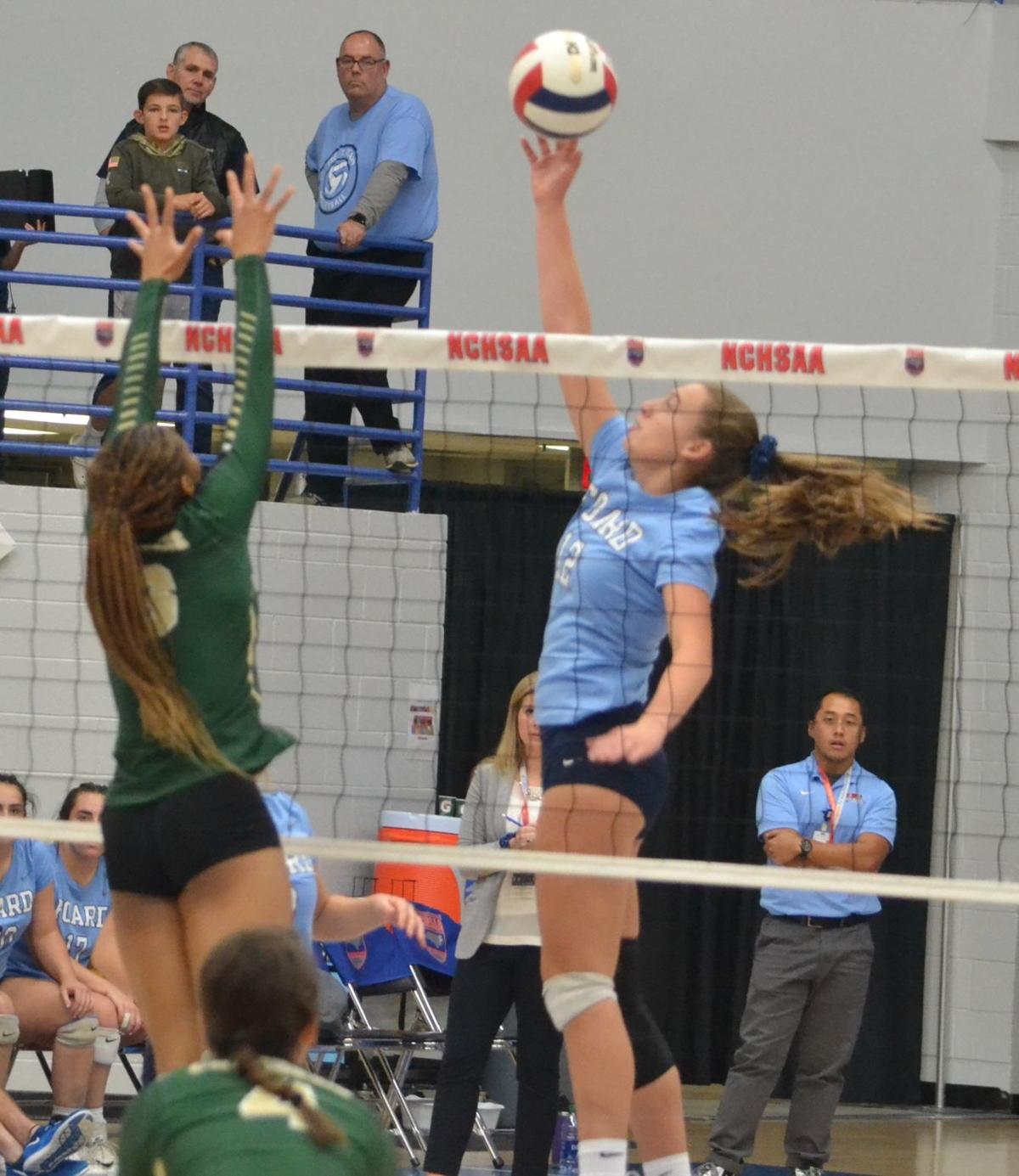 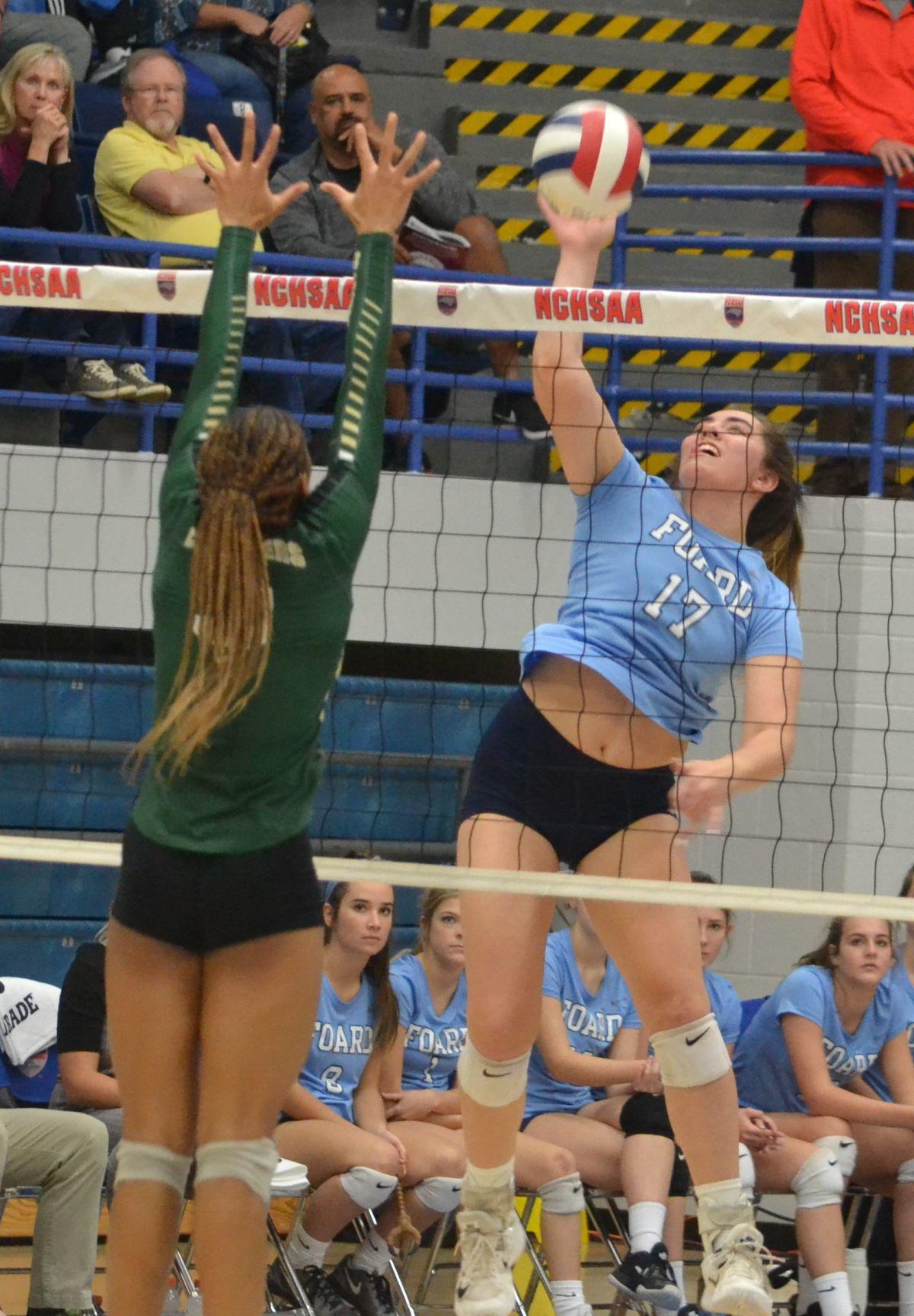 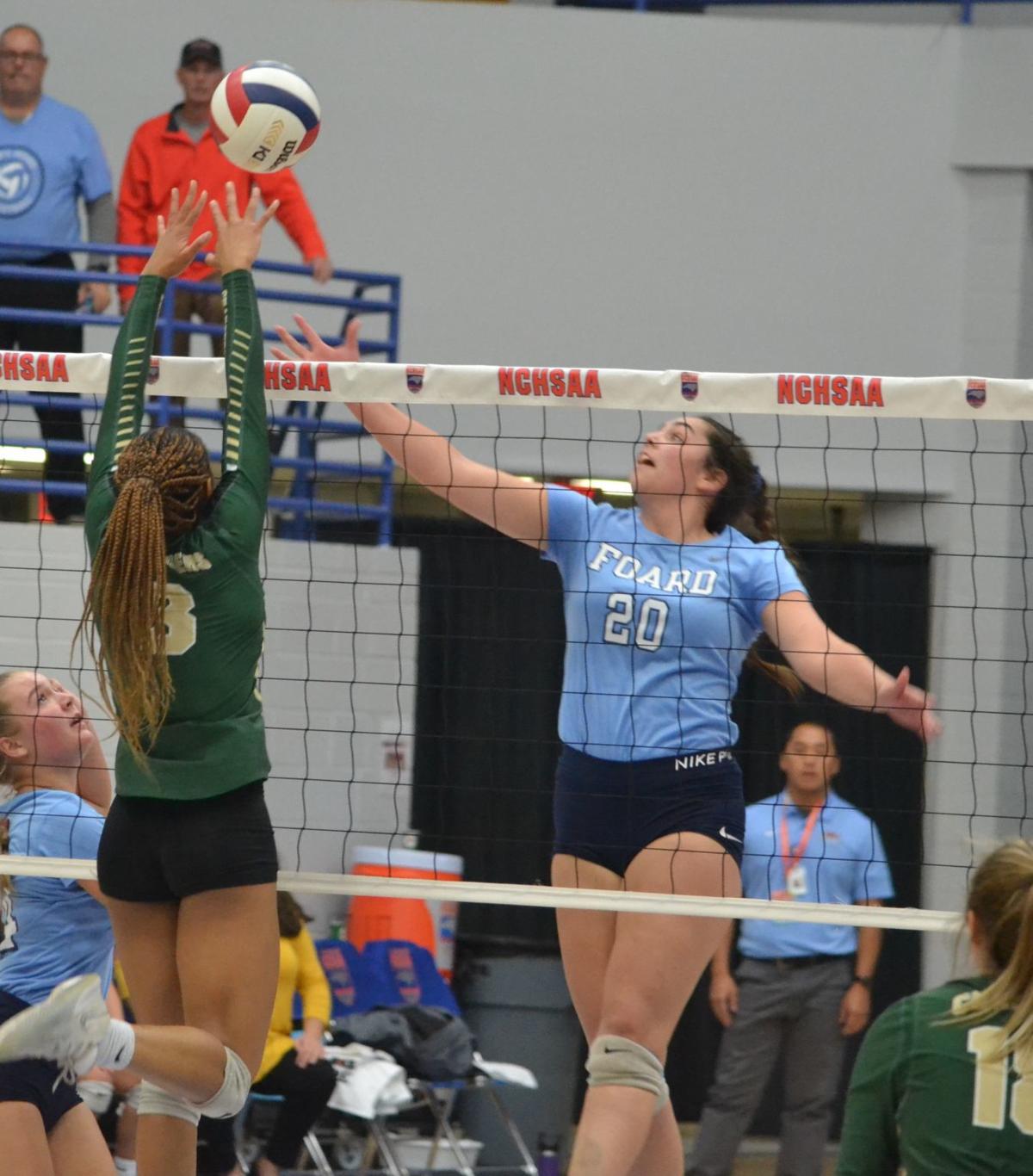 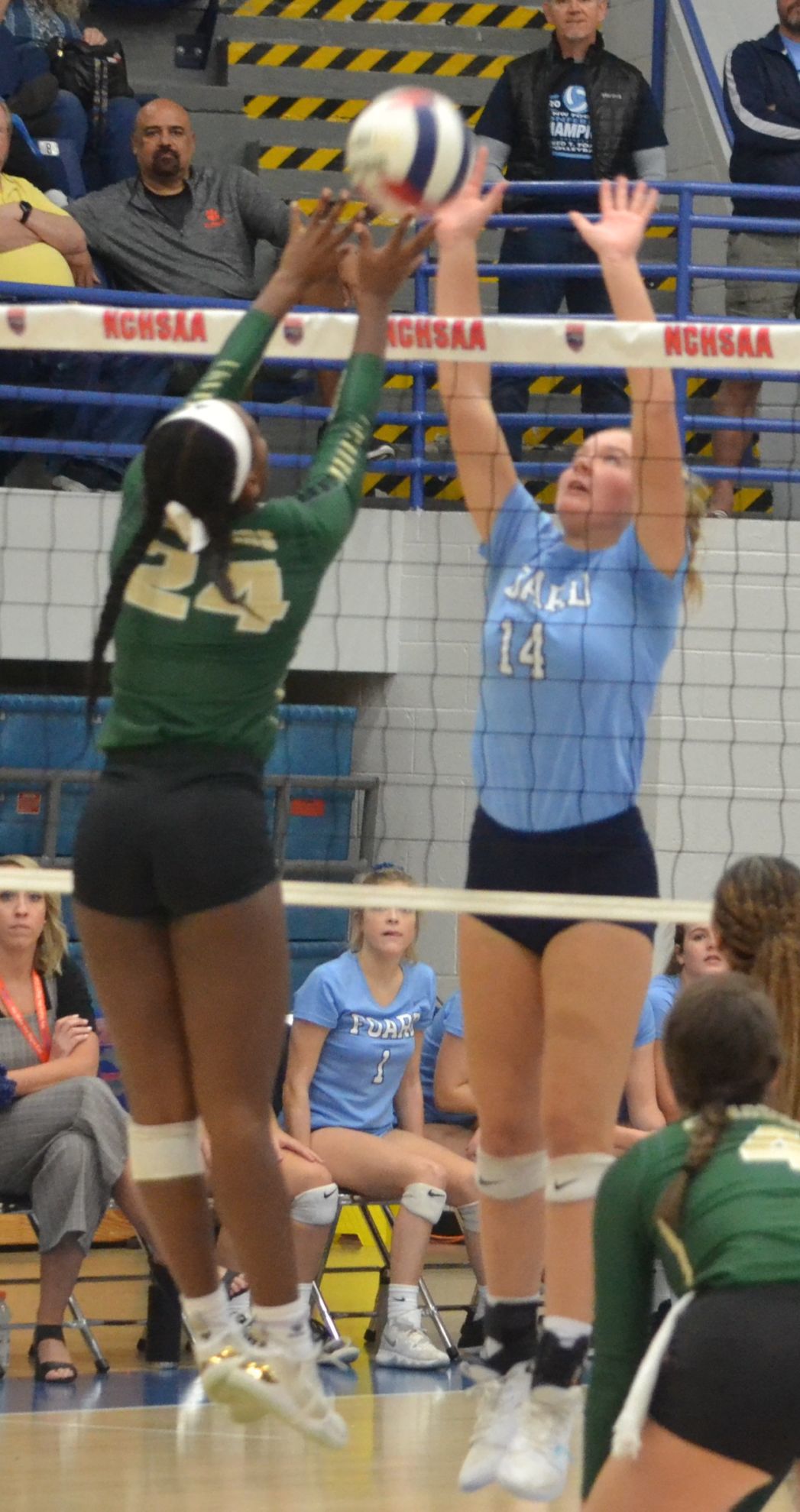 FAYETTEVILLE — History has proven that when the Fred T. Foard volleyball team reaches the state finals, the Tigers are going to bring home a championship. Foard won 3A state titles in each of its first six trips to the big game, winning the 1995, 1996, 1997, 2002, 2003 and 2005 state championships.

In their first attempt at the 2A level, the Tigers again emerged victorious. Top-seeded Foard dominated third-seeded Ayden-Grifton on Saturday night at Fayetteville State University’s Capel Arena, sweeping the Chargers 25-15, 25-12 and 25-11 to capture its first state title in 14 years.

The moment never seemed too big for Foard, as the state’s top-ranked 2A squad according to MaxPreps.com collected its 29th three-set victory of the season and its 11th in a row since suffering its only setback of the campaign. Three of the Tigers’ six set losses this season came in that five-set defeat at the hands of 3A Watauga on Oct. 10.

In the end, Lombardi believes that loss may have been the wake-up call her team needed.

“Watauga, that was a good loss for us, I think we needed that,” said Lombardi. “I would have loved to win, but it kind of just keeps us humble, keeps us on the right page and (realizing) that losing’s OK. But I think it did build us a little stronger because we knew what it felt like and were like, ‘No, that’s not happening anymore.’”

After trading the first few points, a 6-0 run gave the Tigers (32-1) an 8-3 lead in the opening set. Two of the points came on Dara Shaffer aces, while a kill from Martina Foster also contributed to Foard’s early spurt. Following three straight points by Ayden-Grifton after a timeout, Foard reestablished control thanks to back-to-back kills from Michelle Thao and Foster and an ace from Sarah Lingle.

As the set progressed, the Tigers began to frustrate the Chargers (22-6). In addition to key points from Foster, Megan Dorsey and Lingle, crucial errors by Ayden-Grifton allowed Foard to pull away. Ultimately, the Tigers earned a 10-point set win following consecutive double hits by their opponents.

Foard sustained its momentum in the second set, scoring the initial seven points and 13 of the first 15 to put the Chargers in a huge hole. After benefiting from another double hit by Ayden-Grifton to begin the set, other important points included a kill and a block from Sierra Ward, a push from Dorsey, a kill and an ace from Thao and a tip from Lingle as the Tigers prevailed by double digits for the second straight set.

The Tigers looked even better in the third set, which turned out to be the championship clincher. After a kill from Ayden-Grifton’s Emma Jones to start the set, a Jamianne Foster tip pulled Foard even before additional points from Lingle, Ward, Thao and Dorsey allowed the Tigers to build another insurmountable advantage. When all was said and done, it was a 14-point set victory that handed Foard its first 2A state title.

“I just feel like as a team we know how to pursue the ball and we know how to keep it going,” said Dorsey. “I think we all just have really good chemistry and we can stay focused on putting the ball down even through long rallies, and I think we really showed that tonight.”

“As a libero I’m in charge of the defensive part of it, and I just felt like nothing was hitting the floor,” added Shaffer. “I’m very proud of Megan and Michelle.”

Foard’s Thao was selected as the state championship MVP after registering 10 kills and 10 digs, while Martina Foster added six kills, Dorsey had five kills, three aces and six digs, Shaffer tallied two aces and 20 digs, Lingle finished with two aces and eight assists and Ward recorded three blocks. Haley Johnston, who along with Ayden-Grifton’s Holly Cannon was presented with a North Carolina High School Athletic Association sportsmanship award prior to the contest, chipped in three aces, seven digs and 19 assists for the Tigers.

“These past two years have just been really, really fun and I hope they feel the same way,” said Lombardi of her team. “But just watching them out there and seeing them grow and the excitement they get, they get after it — and it’s not just in games, practices are just the same. They expect of each other what they expect in games, and I think that’s what’s helped us build a strong program is just that mindset.”