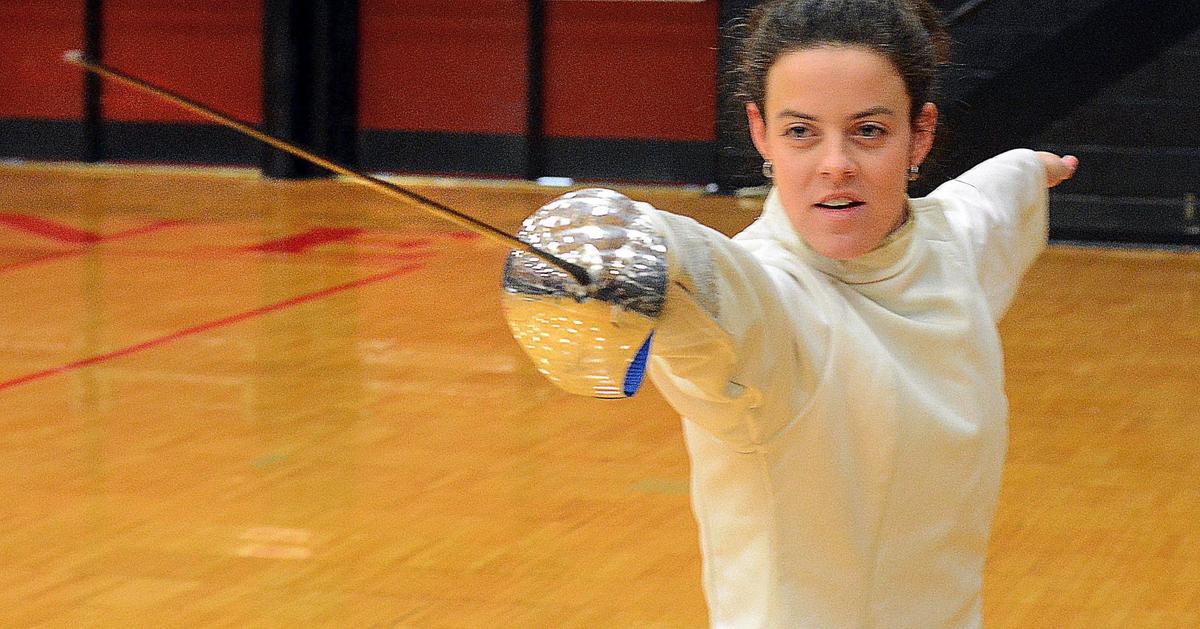 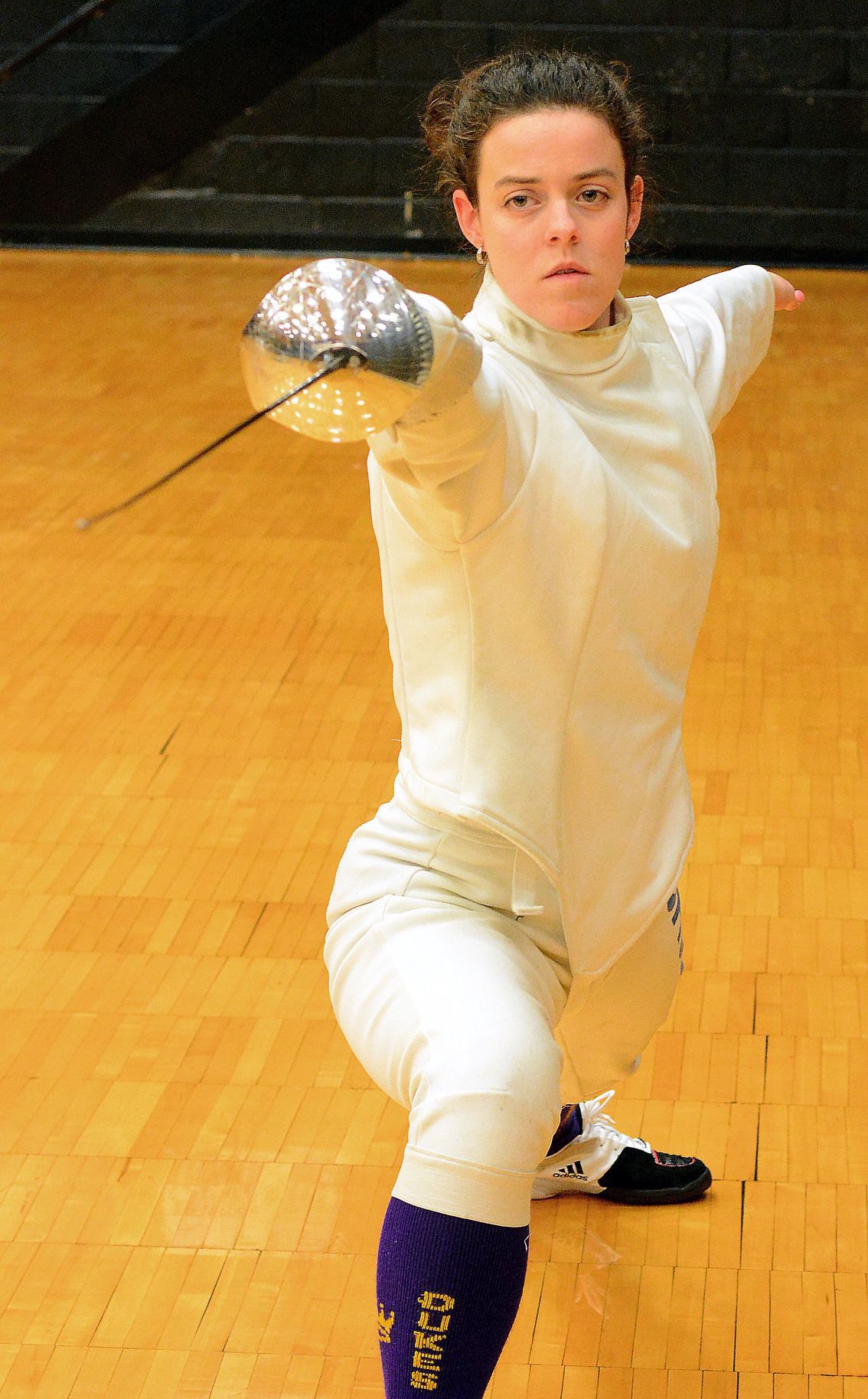 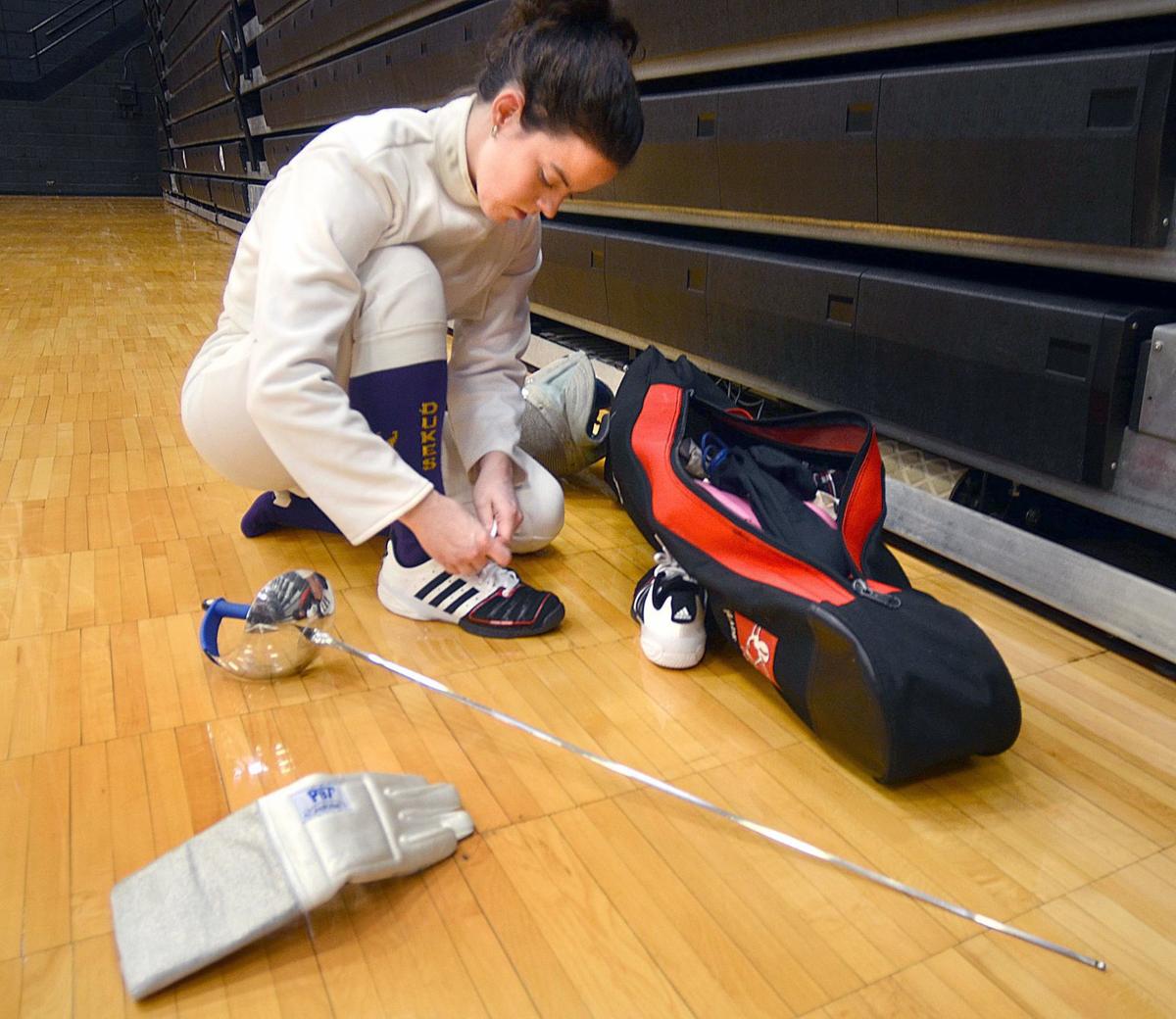 Mikeala Skelton’s shoes clicked across the gym floor as she practiced her fencing techniques Tuesday afternoon. Her body movements were swift, and the expression on her face remained focused.

Skelton, 26, said she played soccer much of her life. After starting college at James Madison University in Virginia, she decided it was time to look at other sports.

“When I was at JMU, I saw an advertisement for fencing on a table tent and I thought, ‘That sounds really cool,’” Skelton said.

She joined a fencing club with minimal knowledge of the sport.

With help from others in the club, Skelton said, she learned about the three disciplines of competition.

Skelton said that along with having different styles, the primary differences in the three disciplines are the types of blades used and the different points on an opponent’s body that can be targeted.

“People find the blade that suits them the best,” she said. “It really is like being sorted into your house in (a) ‘Harry Potter’ (book). It fits your personality, your athleticism … it determines what blade you really feel at home with.”

Skelton chose saber as her discipline. “That is the only blade I fence,” she said.

Skelton moved to Hickory a year and a half ago after getting a job with the marketing team at Lenoir-Rhyne as a digital media producer.

Coming from a small rural town in Virginia, Skelton said she found a community full of opportunity.

“I often wished we (my family) lived in a big city with more opportunities growing up, but now I’m proud to be from a small town because of the perspective it lends me,” Skelton said. “People say that there’s nothing to do in Hickory. I say, ‘Have you been to South Boston?’”

Skelton previously thought her fencing days were over.

“After graduating college I really didn’t think I would get to fence again, because fencing is not so popular in the South,” she said. “It’s much much much more popular up North in states like New York or New Jersey that are full of fencing clubs.”

But Skelton was able to find a way to not only continue to participate in the sport but improve in it.

She found and joined a club in Morganton, Knights of Siena, which gave her something she never had before: a coach. Before joining Knights of Siena, Skelton was taught by more experienced fencers in her club at James Madison University. “Under (coach Alan Blakeborough) it’s a completely different ballgame because he is a coach and he is so knowledgeable,” she said.

“He knows different moves that my teammates in college didn’t know.”

Skelton said she hopes that one day a fencing club will be brought to Lenoir-Rhyne, which she would gladly take part in.

“I have floated this idea,” she said. “My coach and I have discussed: ‘Wouldn’t it be cool to start a club here? To start a (Lenoir-Rhyne) fencing club.’

“It would take a lot of support,” Skelton said. “Who knows?”

I’m motivated to fence, teach fencing and perform onstage by my love for both sports and performing.

I’d be a liar if I said I wasn’t competitive. When I land a touch by using a skyhook correctly or simply make the right parry against an opponent’s blade, I feel that I’ve achieved something. That something may be small and insignificant in the scope of life, my job, relationships with friends and family, etc., but it’s mine. That touch, that point, was mine, and maybe, with enough practice, I can do it again even better, more consistently. When I teach a beginner proper footwork, I’m rewarded by their excitement the first time they fence well on the strip, flowing up and down with quick, purposeful steps. I love watching beginners understand and come to love the sport of fencing.

What makes you happy?

I think it’s the simple things that give me the most joy. When I’m able to step away from the bustle of life and enjoy my morning coffee and a good book at Taste Full Beans or a walk with a friend or just talk sports with my mom — those are the moments I cherish the most.

What is the best advice you have received?

I think one of the best pieces of advice I’ve ever received would be my dad encouraging me to pursue storytelling as a career. Rather than dwelling on what lay on the surface, he looked deep into what makes me who I am. I come from a long line of storytellers, and he knew that. It was that piece of advice that started my journey to where I am today.