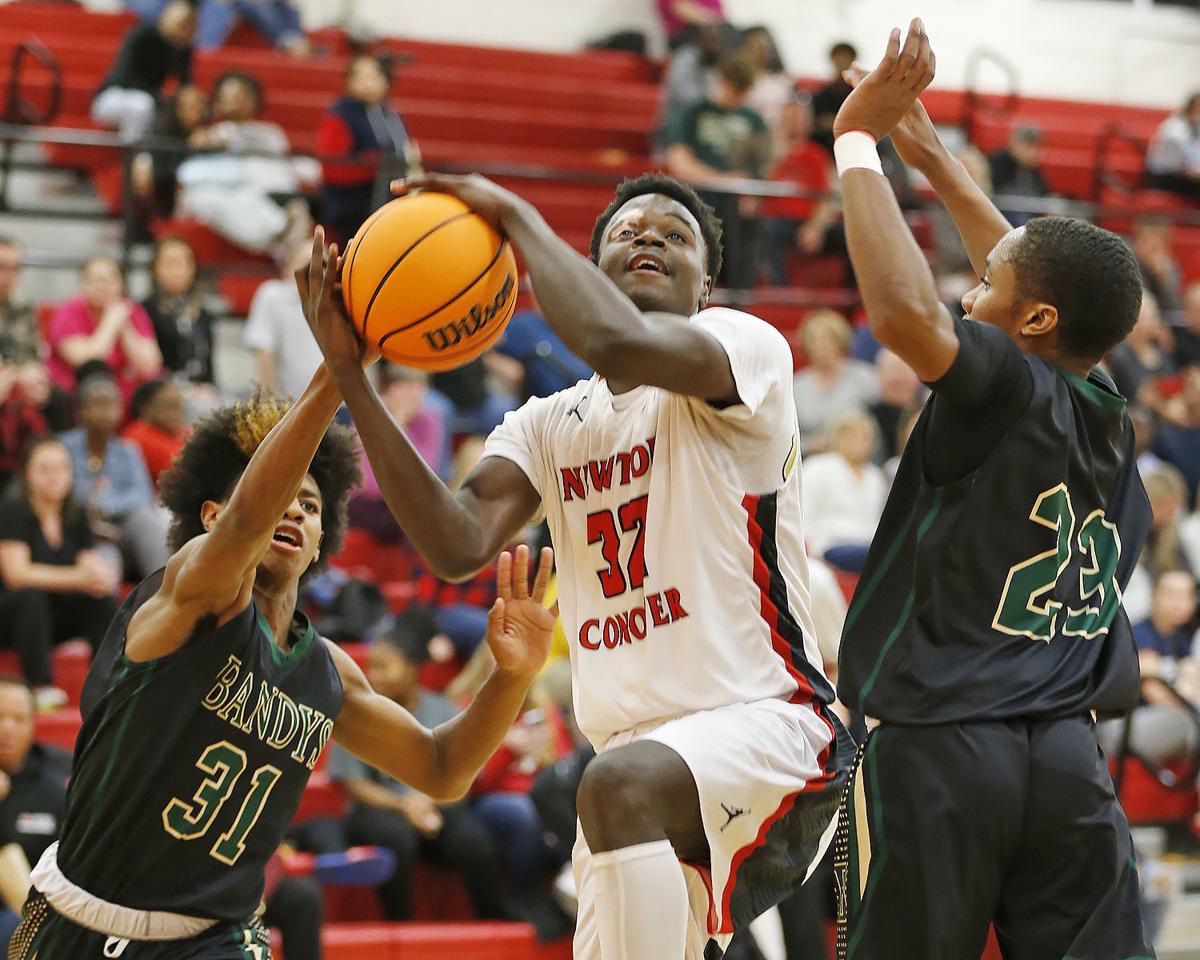 Newton-Conover’s Zane Redmond (32) drives to the basket between Bandys’ Chris Culliver (31) and Quenten Maddox (23) during Tuesday night’s game in Newton. 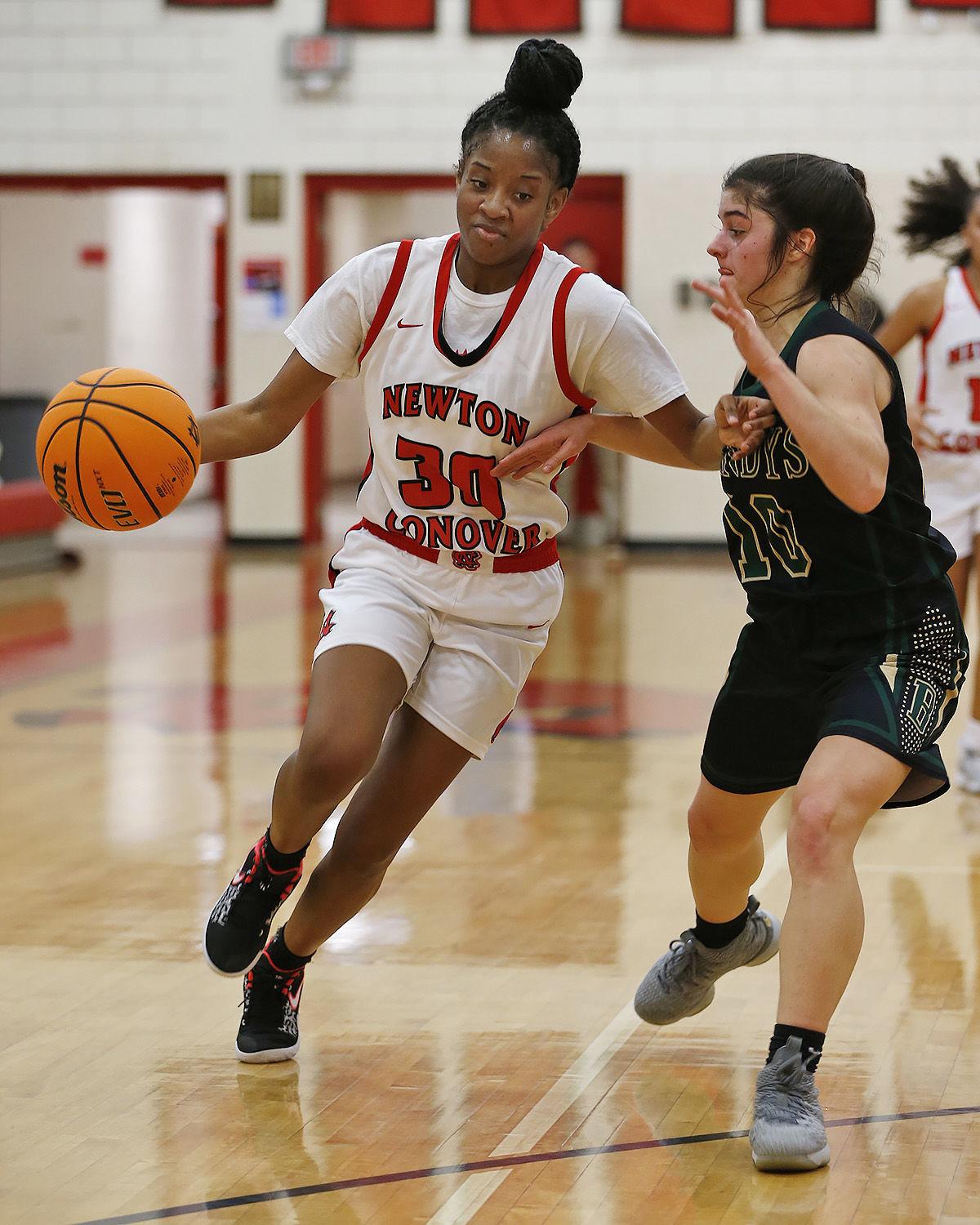 Newton-Conover’s Zane Redmond (32) drives to the basket between Bandys’ Chris Culliver (31) and Quenten Maddox (23) during Tuesday night’s game in Newton.

NEWTON — The Newton-Conover boys basketball team broke open a tight game at the half with a zone defense that had Bandys’ offense spitting and sputtering on Tuesday night. The Red Devils pulled away over the final two quarters for a 61-42 win over the Trojans.

The first time the two teams played, Newton-Conover needed overtime to pull out a five-point win earlier this month.

“We’re getting better,” said Newton-Conover coach Matt Wilkinson. “A couple of weeks ago we challenged the kids. They continued to put good practices together back-to-back, good ballgames back-to-back and we feel like we’re headed in the right direction.”

The win keeps the Red Devils in a tie for second place and just a game back of Lake Norman Charter in the loss column in the South Fork 2A Conference.

Newton-Conover broke an early 2-2 tie with a 3-pointer from the left wing by Jackson Mullins. Although Bandys never took a lead in the game, the Trojans did keep it very close in the first half.

Down 14-8 after one quarter and 23-12 after a fast-break three-point play by Maverick Davis with 5:22 remaining in the second, the Trojans mounted a comeback and scored 10 straight points with Spencer Ledford and Nate Ervin doing most of the offensive damage.

Ervin’s stickback made it a one-point game with just 10 seconds to go before intermission, but Newton-Conover raced up the court and Mullins nailed a triple at the buzzer to increase the Red Devils’ lead to 28-24 at the break.

“That was a big play. Matt (Martinez) was very unselfish and hit the trail man (Mullins) right there,” Wilkinson said. “We turned it over several times right there before halftime. That kind of slowed their momentum right there.”

If Mullins’ late 3 slowed the Trojans’ momentum, a Newton-Conover defensive adjustment coming out of the locker completely stalled the offense of the visitors from Bandys.

“We went to the (2-3) zone there in the second half,” Wilkinson said. “I did that to try to keep them off balance. They were executing so well with their man offense. I guess maybe I should have gone to it a little bit earlier.”

Over the first 4:08 of the third period, the Red Devils outscored Bandys 12-4 to boost their cushion to 40-28. Martinez had half of the Newton-Conover points in that rally and all came from in close. Jaheim McCathern added four more before the quarter ended as the Red Devils went into the final quarter up 44-33.

Zane Redmond continued the offensive push inside the lane in the fourth quarter with another basket and Keenan Guerry added back-to-back treys for a 52-35 Newton-Conover lead.

Down 17 with just over five minutes to play, Bandys could only manage seven points the rest of the way.

Key in the Red Devils’ success was the play of posts McCathern and Redmond off the bench. They combined for 13 points — all in the paint and at the free-throw line.

“It doesn’t work if those kids (McCathern and Redmond) don’t buy into their roles,” Wilkinson said. “That’s what they’ve done. Our depth is starting to show its dividends for us.”

Martinez was the lone Red Devil in double figures with 11 points, but Mullins and Kennedy each had eight to back him up.

Quenton Maddox and Chris Culliver were the leading scorers for Bandys with 10 points each.

Such was the case Tuesday as Newton-Conover took control soon after the opening tip-off and never relinquished it on the way to a 37-point win over Bandys.

“I think they (Bandys) are a much better team than they played tonight,” said Newton-Conover coach Sylvia White. “We played real good defense and that makes good things happen for you. We didn’t shoot the ball well for the first five minutes, but after that ...”

After that it was lights out. Led by Rutgers-bound Chyna Cornwall, the Red Devils were never threatened and raced to a 19-2 first-quarter lead.

Macy Rummage scored for the Trojans at the 5:28 mark of the opening period, but Bandys didn’t score again until Toni Laney cashed in at the free throw line with 4:45 to play in the second quarter. The Trojans didn’t record their second field goal until Laci Paul’s bucket with 5:38 to go in the third quarter.

“We weren’t a very good defensive team when this year started. If there is one thing we have worked on every day, it is defense,” White said. “We’re trying to get our kids to understand there are going to be nights when you don’t shoot well. But you can always have a night and play good defense.”

Making things even tougher for the Trojans was the loss of Logan Dutka late in the first quarter. Dutka hit her head on the court and was placed in concussion protocol.

Cornwell had a team-high 19 points with nine field goals. She also blocked three shots. Cassidy Geddes canned three treys and was also in double figures for Newton-Conover with 13 points. Aaliah Walton and Jahlea Peters each had eight points for the Lady Red Devils.

Whitney Drummond and Rummage shared high-point honors for Bandys with six points each.

Newton-Conover remains on top of the South Fork 2A Conference with an overall mark of 16-2 and a league record of 9-0. The Red Devils are winners of nine straight and will play at home on Friday against West Lincolnton.

Bandys drops to third place in the league at 13-5 and 6-3. The Trojans will be at home Friday versus Lincolnton.

it is hard to believe that Bandys is that much inferior to Newton,where are the great girls used to put the fear to anyone that played Bandys!