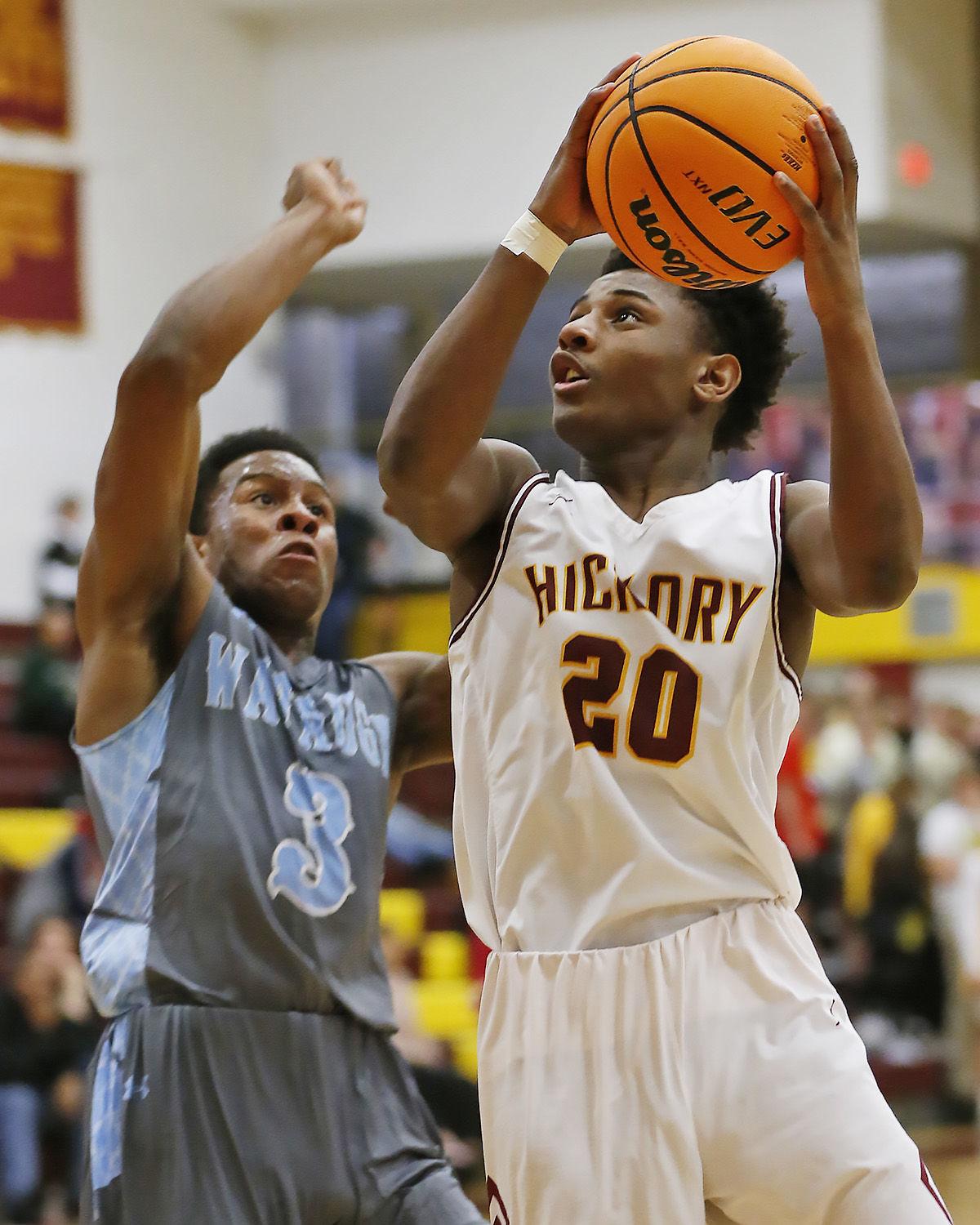 Hickory’s Jaden Maddox (20) gets to the basket past Watauga’s Jaiden Bond (3) during Tuesday night’s game in Hickory. 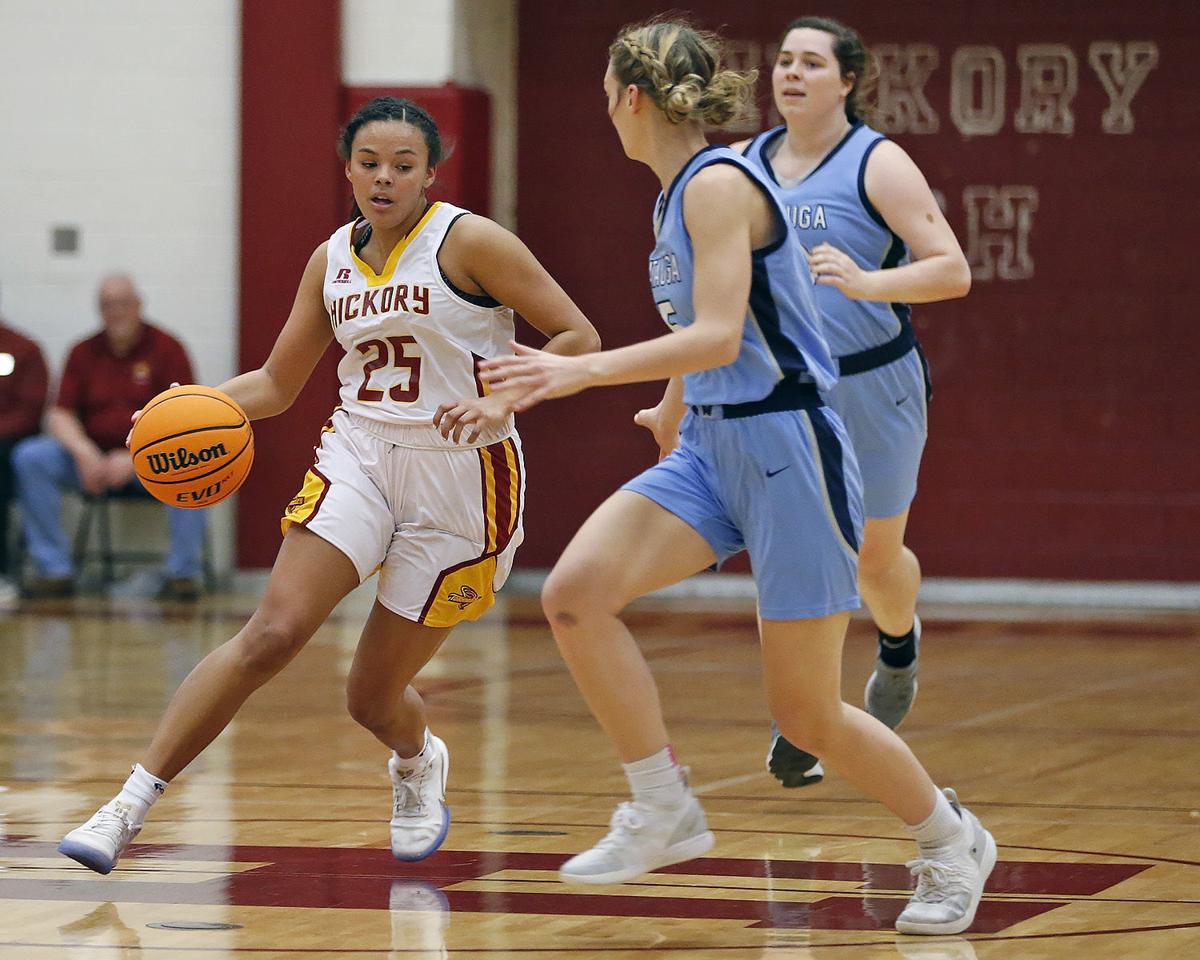 Hickory’s Jaden Maddox (20) gets to the basket past Watauga’s Jaiden Bond (3) during Tuesday night’s game in Hickory.

The Hickory boys basketball team was on a three-game losing streak and facing first-place Watauga on Tuesday night. However, the Red Tornadoes never trailed and used a stout defensive performance to climb back into the Northwestern 3A/4A Conference race with a crushing 57-33 win over the Pioneers.

“Just felt like we needed this one for a bunch of different reasons. Let me tell you about our kids,” said Hickory coach Andy Poplin. “We lost three straight games, but our last three practices have been our best three. Defensively, we just decided that’s the way we have to win. If we hold people down like that, we’re going to give ourselves a chance. That’s the way we got on a win streak early, and that’s the way we’re going to have to get back on a winning streak.”

Watauga came into the game averaging nearly 65 points a game, but only managed to hit double digits in two of four quarters. The Pioneers starters only combined for 13 points the entire game and the visitors never held a lead over the Red Tornadoes.

Four different Hickory players scored the first four baskets as the Tornadoes pushed out to a quick 9-2 lead. Chrishon Hargrove finished off the opening frame for Hickory with a drive into the lane for a basket at the first-quarter buzzer and a 13-6 advantage for Hickory.

The Tornadoes went on a 9-3 run to begin the second quarter, including seven straight on a triple from Jaden Maddox, a fast break by Hargrove and a layup from Davis Amos to up the lead to 22-9 with more than half the second quarter still to play.

Watauga cut that lead to 22-16 before the Tornadoes went on another run, including another buzzer beater by Zay Huitt, to send the teams to their locker rooms with Hickory in front 28-16.

Another solid period in the third quarter gave the Tornadoes a comfortable lead heading into the fourth period, 43-27.

Eight different Hickory players scored thanks to patient ball movement. Poplin noted that put the defense in a strong position all night.

“If our offense is bad and we take hurried, forced shots, our defense struggles,” Poplin said. “But if our offense is solid and we share the ball, we search for good shots instead of settle, that helps our defensive balance. We’re able to get it back to five-on-five.”

A 10-0 Hickory run to begin the fourth quarter ended any hopes Watauga had of rallying back.

No Pioneer managed to score in double figures. Watauga was led by Andrew Freeman who had nine points.

“Number 10 (Anderson Castle) has scored 20-plus points in four straight. He’s been hot and they’ve got some shooters that can really stretch the floor,” Poplin noted of the Pioneers’ senior forward, who had just four points against the Tornadoes. “I’m proud of our guys for guarding the ball and staying in front.”

Amos paced the Tornadoes with 17 points and Nick Everhardt cashed in for 10.

Hickory will play at Alexander Central on Friday.

In a battle between the two squads tied for second place in the Northwestern 3A/4A standings, Watauga picked up a crucial road win over the Red Tornadoes.

Trailing 11-7 late in the first quarter, Hickory ran off the last six points in the period including a long buzzer-beating triple from Aysha Short to grab a 12-11 lead.

That was the one and only lead the Tornadoes managed the entire game. They did forge a 20-20 tie midway through the second quarter, but trailed at intermission, 23-22.

Watauga pushed out to a six-point margin on two free throws early in the fourth quarter. But the Tornadoes got back to within a single point, 42-41, with 36 seconds remaining when Short put in a runner off the glass.

From there, Watauga went 3 of 4 from the free-throw line in the final 13 seconds to secure the victory.

Brooke Byrd led the Pioneers with 11 points and Brelin Sturgill had 10. Short led Hickory with nine points, while Finley Lefevers and Shelby Darden each had eight.

The Tornadoes travel to Alexander Central on Friday.