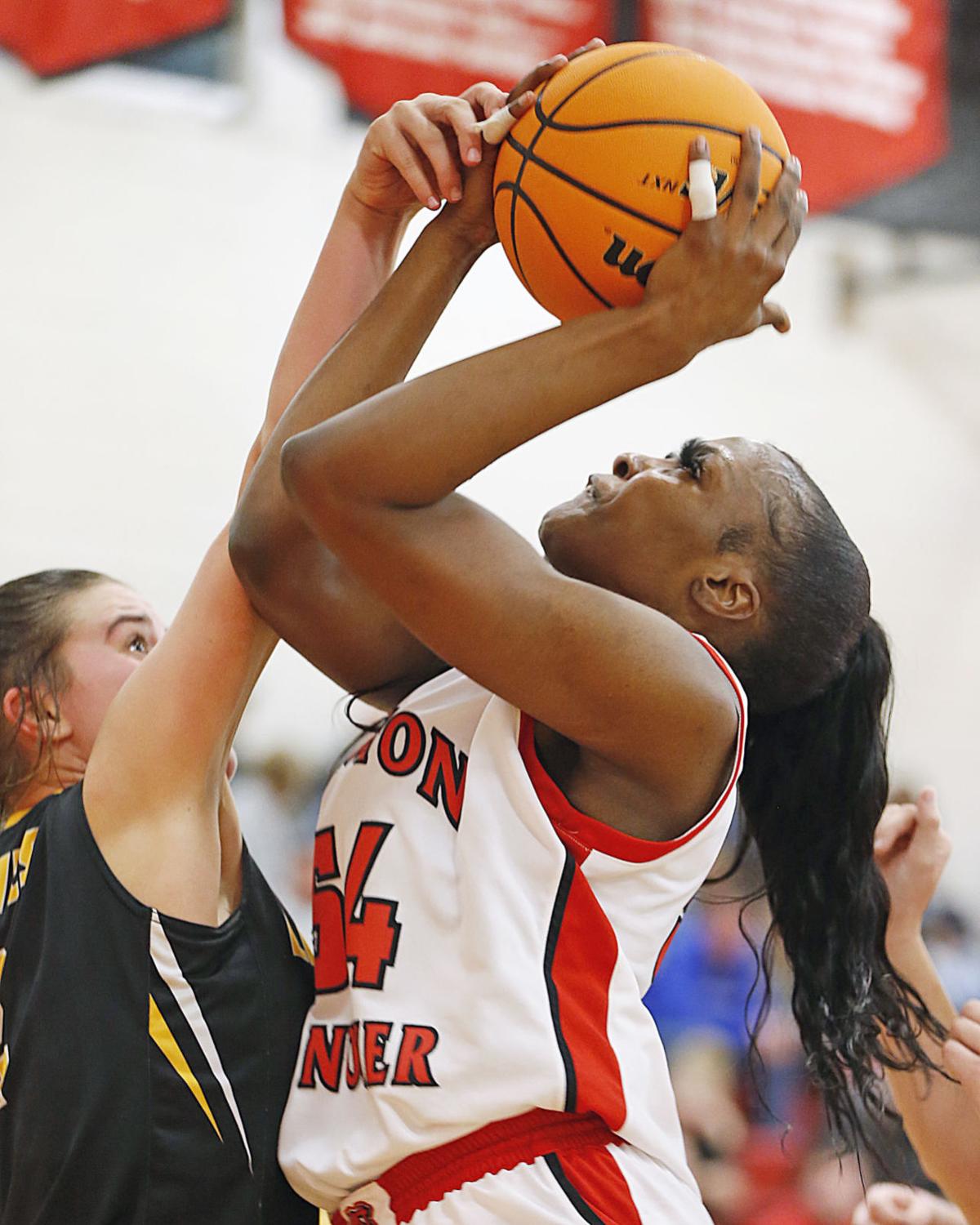 Newton-Conover’s Chyna Cornwell (54) tries to get a putback against Lincolnton’s Leah Tweed (2) in this file photo. Cornwell scored the 2,000th point of her high school career against Bunker Hill during the semifinals of the Dick's Sporting Goods Classic on Saturday night at Catawba Valley Community College. 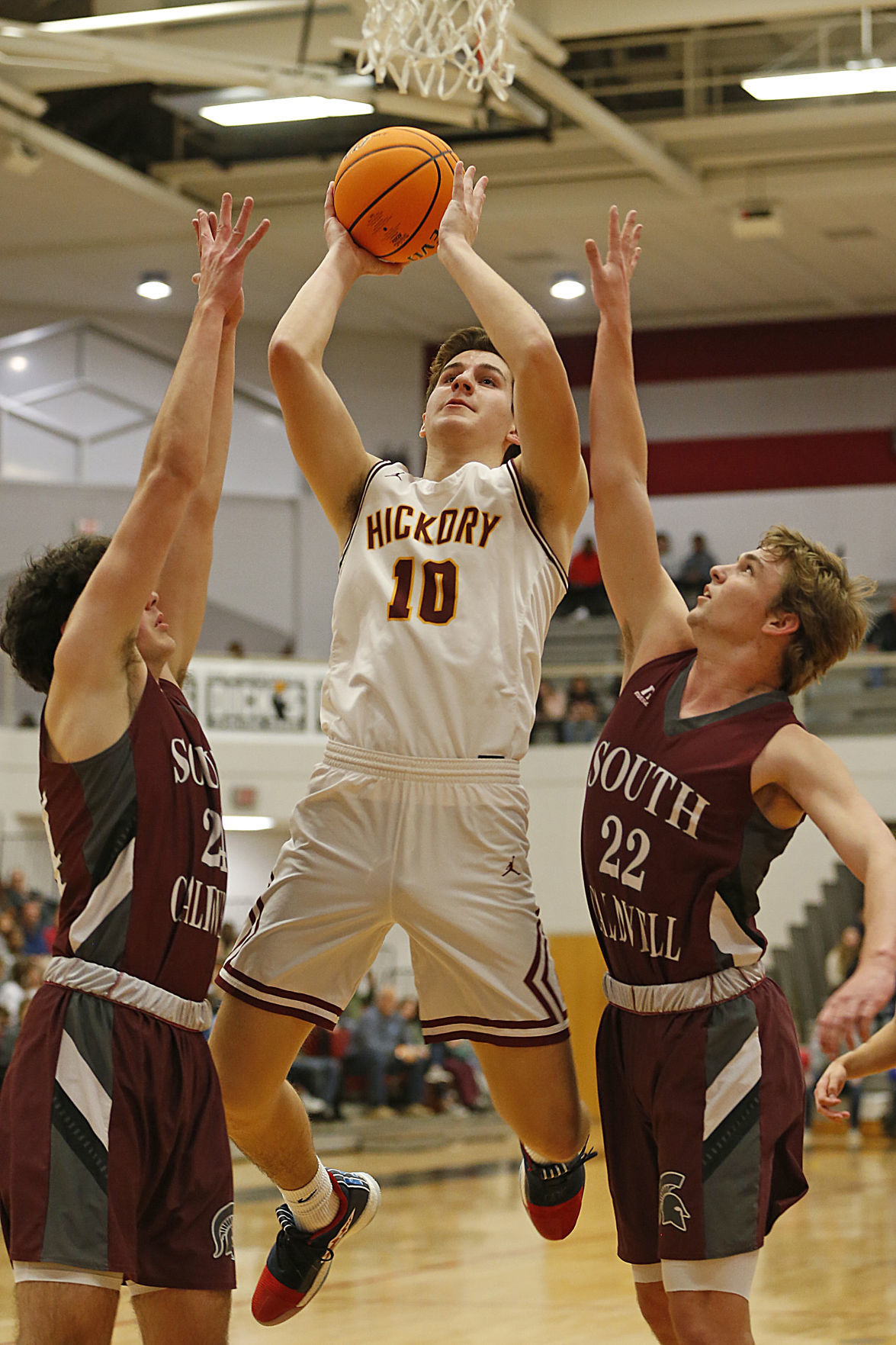 Newton-Conover’s Chyna Cornwell (54) tries to get a putback against Lincolnton’s Leah Tweed (2) in this file photo. Cornwell scored the 2,000th point of her high school career against Bunker Hill during the semifinals of the Dick's Sporting Goods Classic on Saturday night at Catawba Valley Community College.

For the fourth year in a row, it’ll be an all-Hickory final at the Dick’s Sporting Goods Classic, as the boys and girls basketball teams advanced with wins during Saturday night’s semifinals, which were held at the Tarlton Complex at Catawba Valley Community College.

In the girls’ tournament, No. 4 Hickory upended top-seeded South Caldwell 54-46. The Red Tornadoes will play No. 2 Newton-Conover in the finals, which is a rematch of last year’s championship. The Red Devils returned to the finals after outlasting No. 3 Bunker Hill 60-55. The girls’ finals are scheduled for 7 p.m., while Bunker Hill and South Caldwell will play in the third-place game, scheduled for 4 p.m.

Here is a look at all four contests from Saturday night’s semifinals:

Chyna Cornwell scored her 2,000th career point in the second quarter, but it was her play midway through the final period that proved to be the difference in the game.

The game of the day — which had 12 lead changes and six ties — came down to which team could navigate through foul trouble, as both teams had two starters with four fouls as play entered the final quarter. The first domino to fall was the fifth foul charged to Bunker Hill’s Madison Stotts with 5:45 to play. With the Bears (7-4) up 49-47, Stotts was whistled for a holding foul during a Newton-Conover pass into the post that went out of bounds.

Aaliah Walton, who played only 16 minutes because of foul trouble, hit a 3-pointer to put the Red Devils ahead. Faith Isenhour (16 points) answered with a layup with 5:31 left.

Addison Wray (18 points) cut the lead with a layup and Isenhour made 1 of 2 free throws to make it 56-54. The Bears forced three straight turnovers, but were unable to convert them into points. Bunker Hill hampered its own cause with poor free throw shooting, making just 14 of 28.

Cornwell fouled out with 1:49 to go, but the Red Devils were able to get a jumper by Cassidy Geddes (12 points) and two free throws down the stretch.

The loss was the Bears’ third this season to Newton-Conover, all coming down to the wire. Bunker Hill coach Lee Swanson said his team is having to learn how to win close game against top opponents.

“A lot of it is learning how to finish out the game,” said Swanson. “We got to the line and couldn’t make it. It’s not about what percentage you shoot from the foul line, it’s when you make them. We missed some timely shots.”

The 2,000th point for Cornwell came late in the second quarter. Her coach, Sylvia White, said the accomplishment speaks for itself.

“How many players score 2,000 points?” White said. “And we have 20 some odd games to play. Chyna is just an amazing athlete that has made herself into a great basketball player. She works hard and is very deserving.”

It looked to be a Hickory (8-2) runaway early, but South Caldwell (7-2) made Hickory sweat in the second half.

The Red Tornadoes pestered South Caldwell early around the perimeter and dominated the inside in building a 27-8 lead with 4:12 left in the first half. By that point, Hickory had forced 13 turnovers and held a 12-4 advantage in points in the paint. However, the Spartans cut the deficit to 11 by the half and when Faith Curtis (10 points) dumped in back-to-back buckets in the opening minute of the third quarter, South Caldwell was within 29-22.

When Spartans leading scorer Taylor Austin popped in a 3, the deficit was 38-36 with 7:46 to play. However, Hickory’s Shelby Darden (21 points) answered with a hook shot before getting a chance at a three-point play. She missed the free throw, but Finley Lefevers followed up the miss and to put the lead back to six.

Olivia Miller drilled a 3 for South Caldwell, but Darden came back with a dribble-drive layup. Hickory increased the lead to nine with 4:14 to play to put the game out of reach.

Led by Darden and Lefevers, the Red Tornadoes put up 12 points in the paint in the final quarter. The Red Tornadoes also helped their cause by making 13 of 16 from the free-throw line, while South Caldwell made just 7 of 17.

St. Stephens scored the first two points of the game, but it was Hickory’s night after that.

The Red Tornadoes (9-0) led by as many as 30 late in the third quarter in cruising to the win.

Hickory cranked up a 19-9 lead after one quarter and doubled the advantage to 38-18 at the break. The Red Tornadoes simply outran the Indians (4-8) much of the game, finishing with a 16-2 advantage in fast-break points and a 40-10 margin in the paint, with 18 points coming on second-chance opportunities.

Davis Amos led all scorers with 20 points, including 4-of-6 shooting from 3-point range. Ten different players scored for Hickory, as it cleared the bench for the final quarter.

St. Stephens made just 8 of 45 shots for the game, but was able to get to the free-throw line frequently. The Indians made 23 of 30 shots from the charity stripe.

Will Rose led the way for the Indians with 13 points and Zane McPherson chipped in 12.

The Cougars (7-4) methodically picked apart Newton-Conover with an efficient half-court offense and led most of the way in the win.

Alexander Central finished the game 18-of-31 shooting with 16 of the buckets receiving assists. The Cougars went scoreless (0 for 6) from 3-point range, but scored 46 of their points from the paint or the free-throw line (14 of 21).

Leading 29-26 with 7:20 to play, the Cougars added layups from leading scorer Maddox Kerley (16 points, 10 rebounds) and Jem Lowrance (13 points) to boost the lead to seven. Lowrance and Evan Presnell capped the 8-0 run with two free throws each.

The Cougars’ lead grew as high as 14 late in the game before settling on the final margin of victory.

Mathew Martinez hit a pair of 3s in the final quarter to try and keep the Red Devils (6-4) in the game, and finished with a team-high 16 points.

Alexander Central was the last team to defeat Hickory in the tournament, doing so in the 2015 semifinals on the way to its only championship in the holiday tournament.