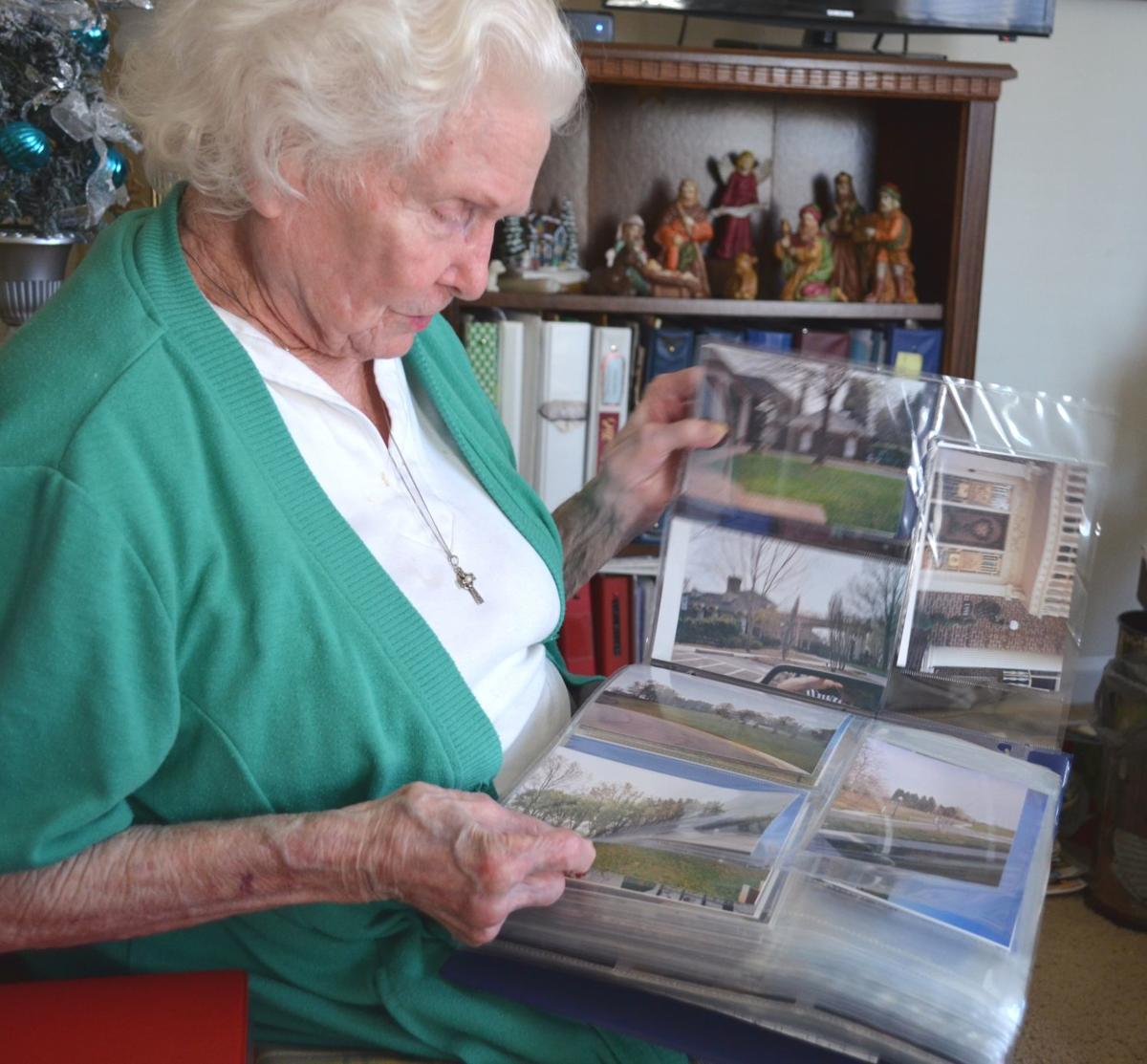 Carleen Willard flips through a photo album of pictures she took of the Mosteller Mansion. 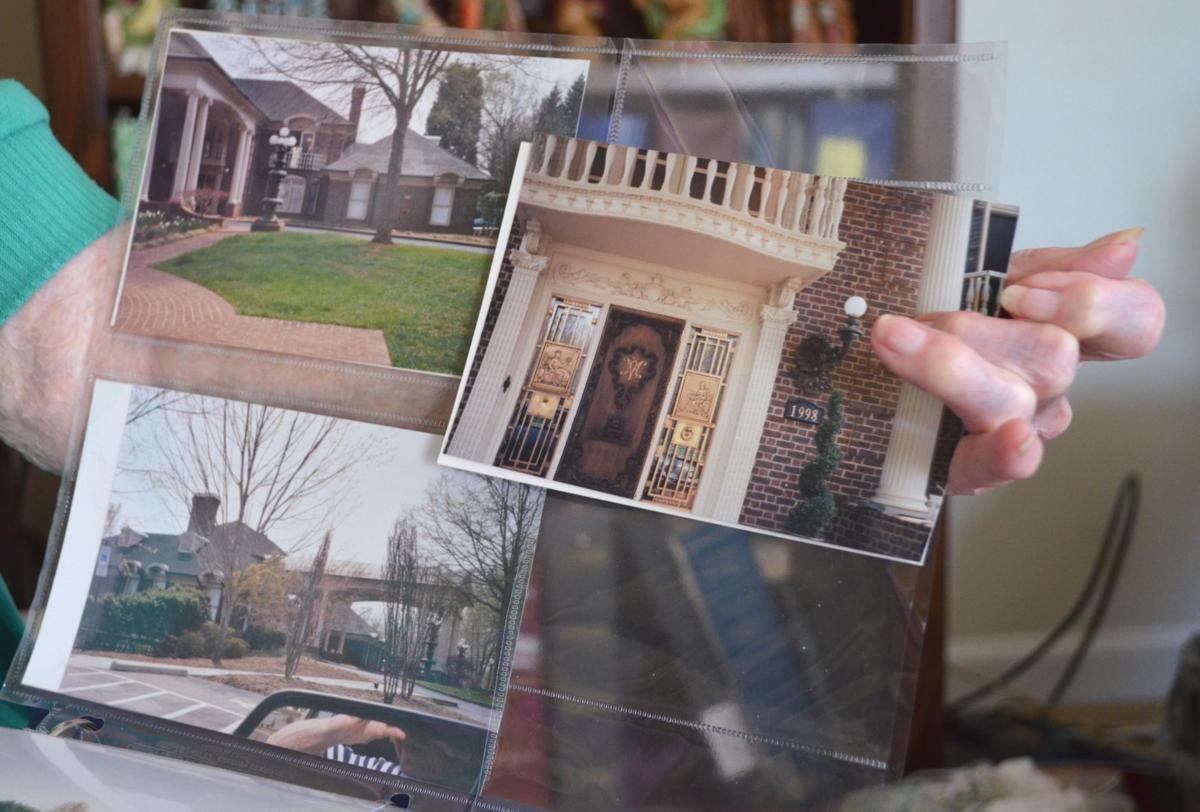 Carleen Willard's favorite part of the mansion is the carved wooden door.

Though her voice is shaky from years of wear, Carleen Willard raises it to talk about the Mosteller Mansion.

The 94-year-old is one of many who recently found out that the massive 1980s mansion in Hickory could be torn down to make way for new apartments.

“I am devastated that they’ll tear it down,” she said in a voice strong with defiance.

For 13 years she lived in The Estates apartments on the Mosteller Estate, near the Mosteller home, the mansion off Catawba Valley Boulevard behind a shopping center in Hickory. Over those years the 14,000-square-foot house served as the community center for the apartments. Willard attended dozens of parties at the mansion and frequented its halls, she said.

The building came to hold a special place in her heart. She’s not alone.

When a petition in late November brought attention to plans for the mansion to be torn down by Summit Management, the company that bought the estate and apartments in 2012, an uproar followed. The Change.org petition by the Hickory Landmarks Society has garnered more than 1,500 signatures.

The mansion was originally built by William Mosteller, a furniture executive and plastics business owner in Hickory, who passed away shortly after the house was built in the late 1980s. After the mansion and surrounding property were sold by the family, apartments were added on the estate in 2006. The house has been used as a community center for the apartments, for parties, celebrations and weddings.

Now, many who celebrated in the extravagant mansion are speaking out against its destruction.

Fred Galle says the building holds a special place in his heart. It’s where he married his wife Wendy in 1999.

“We were dismayed to hear they were going to tear it down and put something in more modern,” Galle said. “It was a very elegant place to get married back in the day.”

Many people over the years married at the mansion, Galle said. That’s why he thinks the mansion is important to preserve, not only for his own connection but for the entire community.

“It’s kind of a special place for everyone in the area,” he said.

The design and beauty of the house is what he appreciates most about it, he said. The house was a highlight of the Galles' wedding photos. Seeing his wife walk down the curved staircase from the back porch to the patio is an image he won’t forget, he said.

The beauty of the mansion is one reason many are arguing it shouldn’t be torn down, Willard said. Her favorite piece is the carved wooden front door with gold accents to match gold and brass pieces that fill the house.

The architecture is one reason the Hickory Landmarks Society thinks the building should be saved, Executive Director Patrick Daily said. The house is structurally sound with steel support beams, the roof is copper, the house has teak wood floors imported from Thailand and the rest of the wood accents in the house are mahogany. The house is filled with detail, Daily said.

“All interior and exterior window casings are carved and embellished,” he said. “All the ceilings are coffered or otherwise architecturally embellished.”

Other important details include an Italian crystal chandelier in the master bedroom, brass balusters on the spiral staircase and a marble floor. The balusters came from the original Chase Manhattan Bank building in New York, as did the large fountain in the circle drive in front of the mansion, Daily said.

The work of local artists, including on painted ceramic tiles work and stained glass, also add to the house’s importance, Daily said.

“Although the product was sold nationally and is still used today, the Mosteller Mansion may be the largest residence which made use of such a product on this scale,” Daily said.

Mosteller’s contributions to the local economy -- through his work in plastic injection technology and the furniture business, which he was an executive in for many years -- are another reason Daily says the house should be saved.

Architectural and historical significance are two of the three main qualifiers to get a building named as a historic site, but the third is the biggest hurdle for the mansion -- age.

Because the house is not 50 years old, it is unlikely to be named a historic building, Daily said. There are some buildings under 50 years old on the National Historic Register, but only 6 percent, Daily said.

Local officials have expressed the need for housing in the area, which can drive development like the expansion of The Estates.

Stephanie Pace, who owns the fountain and land in front of the house, hopes to buy the house from Summit Management to turn it into an arts center. The negotiations between Summit, Pace and the landmarks society are ongoing.

Letter: A maybe turned into a yes at Mosteller Mansion