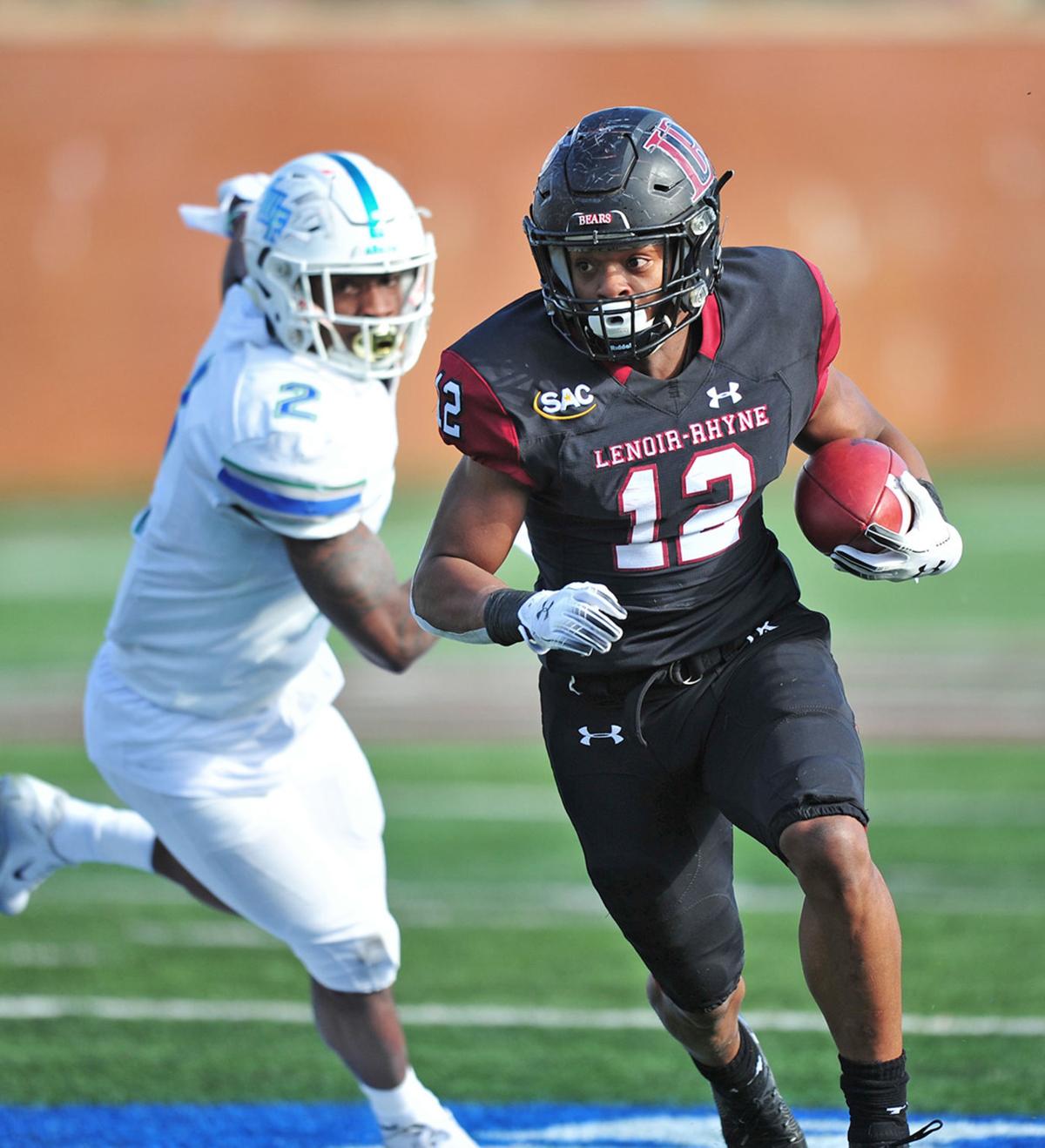 Lenoir-Rhyne's Ryan Carter (12) breaks loose downfield for a big gain after getting by West Florida's Andre Duncombe Jr. (2) in the quarterfinal round of the NCAA Division II football playoffs Saturday at Moretz Stadium. 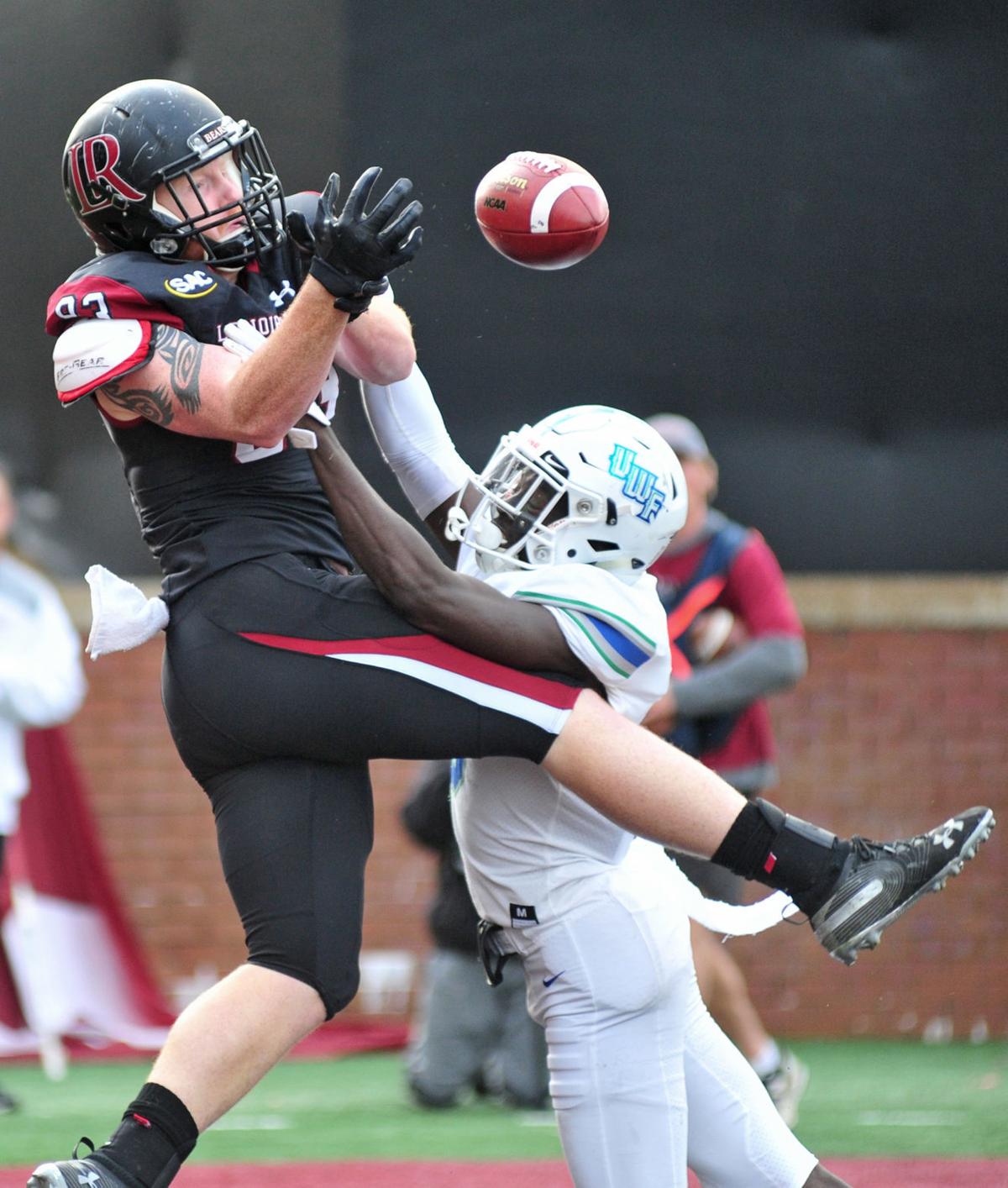 Lenoir-Rhyne's Drake Starks (83) attempts a catch in the end zone while being closely guarded by West Florida's Sharod Oliver (8) in the quarterfinal round of the NCAA Division II football playoffs Saturday at Moretz Stadium.

Lenoir-Rhyne's Ryan Carter (12) breaks loose downfield for a big gain after getting by West Florida's Andre Duncombe Jr. (2) in the quarterfinal round of the NCAA Division II football playoffs Saturday at Moretz Stadium.

Lenoir-Rhyne's Drake Starks (83) attempts a catch in the end zone while being closely guarded by West Florida's Sharod Oliver (8) in the quarterfinal round of the NCAA Division II football playoffs Saturday at Moretz Stadium.

All good things must come to an end.

For Lenoir-Rhyne, the end of the 2019 football season came a few weeks earlier than it would have liked. After starting 13-0 for the first time in the 100-year history of their football program, the sixth-ranked Bears lost in the NCAA Division II Super Region 2 championship game for the second straight season, falling to 20th-ranked West Florida by a 43-38 final on Saturday afternoon at Moretz Stadium.

The Argonauts moved to 11-2 as they advanced to the national semifinals next Saturday against a yet-to-be-determined opponent: Slippery Rock, Ferris State or Minnesota State. Meanwhile, the Bears finished 13-1 in head coach Drew Cronic’s second year at the helm after posting a 12-2 record a season ago.

“That was a wild game. Two really good teams,” said Cronic. “Obviously they made some more plays than we did, but I am proud to be in my locker room, I’m proud to be the head coach at Lenoir-Rhyne. Our kids got behind, kept playing, kept trying to find ways. They didn’t lay down, they didn’t quit, and we had a chance. We had a chance when maybe we shouldn’t have had a chance, and I’ve got a great group of kids.

“I came in two years ago and it was a little bit of a mess, and these guys did everything I asked them to do. They’re gonna walk out of here and be great men,” he added. “All these seniors I have are gonna be great husbands, great fathers, they’re gonna be millionaires because they’ve learned how to love each other and work together and to do the little things. And to make that big of a turnaround and for us to be a national contender now is truly a blessing and it’s because of these kids, because they trusted me and trusted our staff. I’m really, really proud of them and they played their guts out today.”

The Bears started the game by forcing the Argos to go three-and-out, something that happened time and time again in 2019. However, they muffed the punt and the fumble was recovered by West Florida’s D’Anthony Bell at L-R’s 25-yard line.

After driving to the Bears’ 1, West Florida’s Anthony Johnson Jr. had the ball knocked out and recovered by L-R’s Landon Scott. The hosts were unable to take advantage, though, as Ameen Stevens was tackled in the end zone, giving the Argos a safety and the game’s first two points at the 9:52 mark of the opening quarter.

West Florida added to its lead on a 15-yard touchdown pass from Austin Reed to Ka’Ron Ashley less than three minutes later, with Austin Williams tacking on the extra point to make it 9-0 in favor of the Argos.

L-R answered with a scoring drive of its own, moving the ball 75 yards in 12 plays capped by quarterback Grayson Willingham’s 2-yard TD run and the ensuing extra point from Chase Allbaugh late in the first period.

The next two scores went to the Argos, first on a 4-yard TD pass from Reed to Quentin Randolph on the first play of the second quarter and then on a 23-yard field goal from Williams at the 9:30 mark.

After Dareke Young brought the Bears within five, 19-14, on a 19-yard TD reception from Willingham with 4:44 left in the opening half, West Florida countered with a 47-yard scoring strike from Reed to Rodney Coates. Jace Jordan’s 6-yard TD scamper in the final minute cut L-R’s halftime deficit to 26-21.

Following a 20-yard field goal from L-R’s Allbaugh on the initial drive of the second half, West Florida’s Marcus Clayton broke free for a 75-yard kickoff return for a score to give momentum right back to the Argos. Then an 8-yard TD run from Johnson on the first play of the fourth quarter gave them their biggest lead of the game at 40-24.

The next few minutes belonged to the Bears, who scored two TDs in a span of 2 minutes, 15 seconds. Ryan Carter crossed the goal line both times, scoring from 4 yards out at the 13:26 mark of the fourth period following an interception by Scott before adding a 2-yard TD burst with 11:11 remaining. Only one of L-R’s 2-point conversion tries was successful, however, as Willingham found Jaquay Mitchell following the first score before the second pass attempt was broken up by West Florida’s Bell.

From there, the only remaining score came off the foot of the Argos’ Williams, who drilled a 33-yard field goal with 2:11 left to push the visitors’ advantage back to five, 33-28, after missing a 25-yard attempt moments earlier.

L-R tried to put together a last-minute scoring drive, but it was not to be. Despite Willingham’s completions to Carter for 27 and 15 yards and to Mitchell for 8 yards, his final pass attempt of the year was intercepted by Bell at West Florida’s 6 with just over a minute to go. With the Bears out of timeouts, the Argos proceeded to run out the clock and advance to their second national semifinal in the past three years.

“We come from Pensacola and we’ve got a great community there that supported us,” said West Florida coach Pete Shinnick, who dedicated his team’s win to the victims of Friday’s shooting at Naval Air Station Pensacola. “We love the support that we’ve gotten from the Pensacola community and we love the support that crowd has given us, so our hearts go out to them, our prayers go out to them.

“That was a heck of a football game and Lenoir-Rhyne is an extremely well-coached football team,” he continued. “That thing really could have gone either way, so I think we’re blessed to be here, but I love how our guys played.”

“Congratulations to West Florida and Coach Shinnick,” said Cronic. “To do what they’ve done in a short period of time is really amazing and obviously they’ve got an outstanding staff, they’ve got a lot of really good players.

“We didn’t do quite enough at the end, but West Florida I think has a really good team,” he added. “I’d love to see them win the whole thing, to be honest with you. I think they do it the right way. I thought their kids played hard, I thought they played with class, and you always kind of want to say, ‘Hey, we almost beat the national champion,’ so I guess that’s a positive thing. … They’re an outstanding football team.”