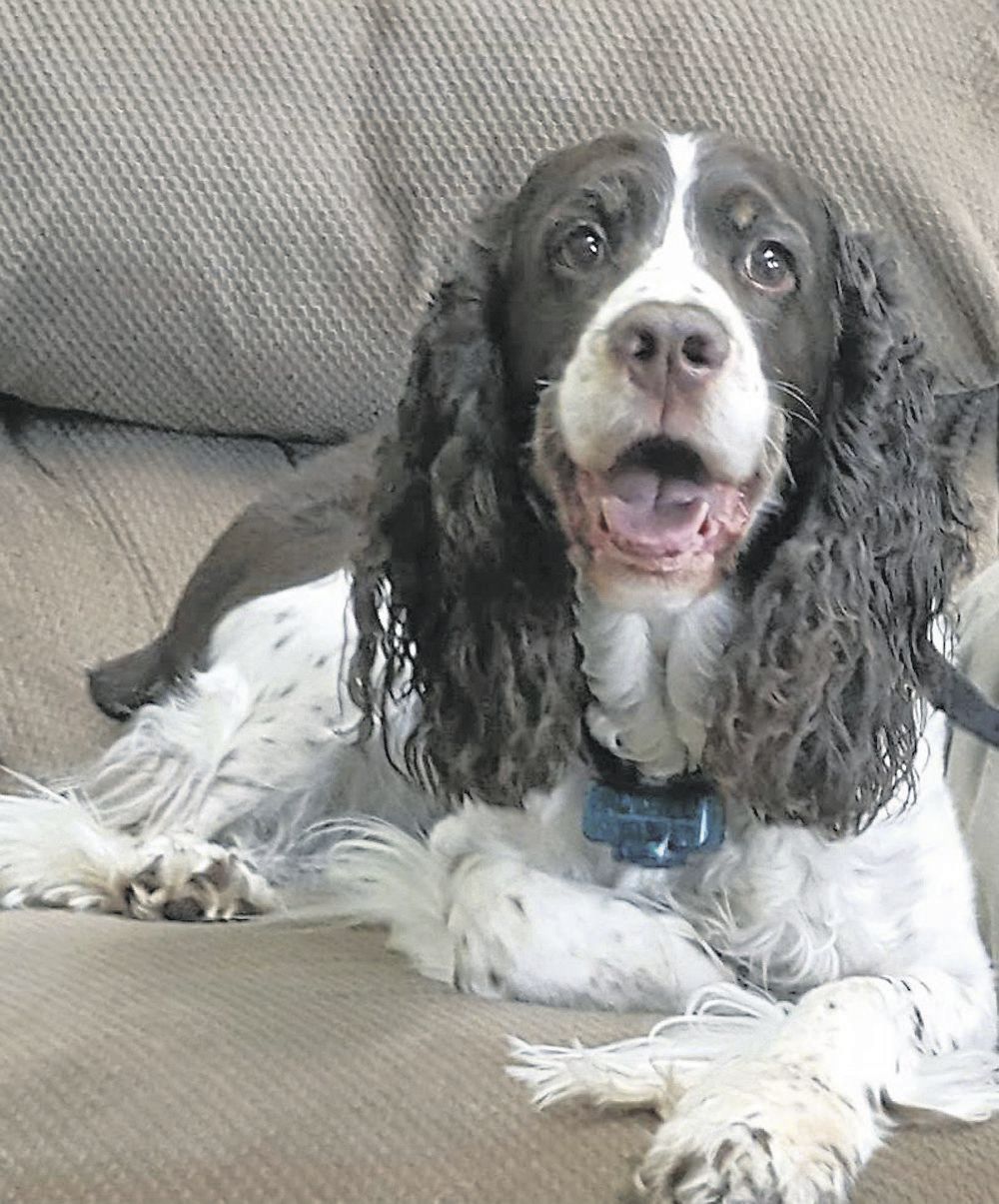 Autumn rests on the sofa. 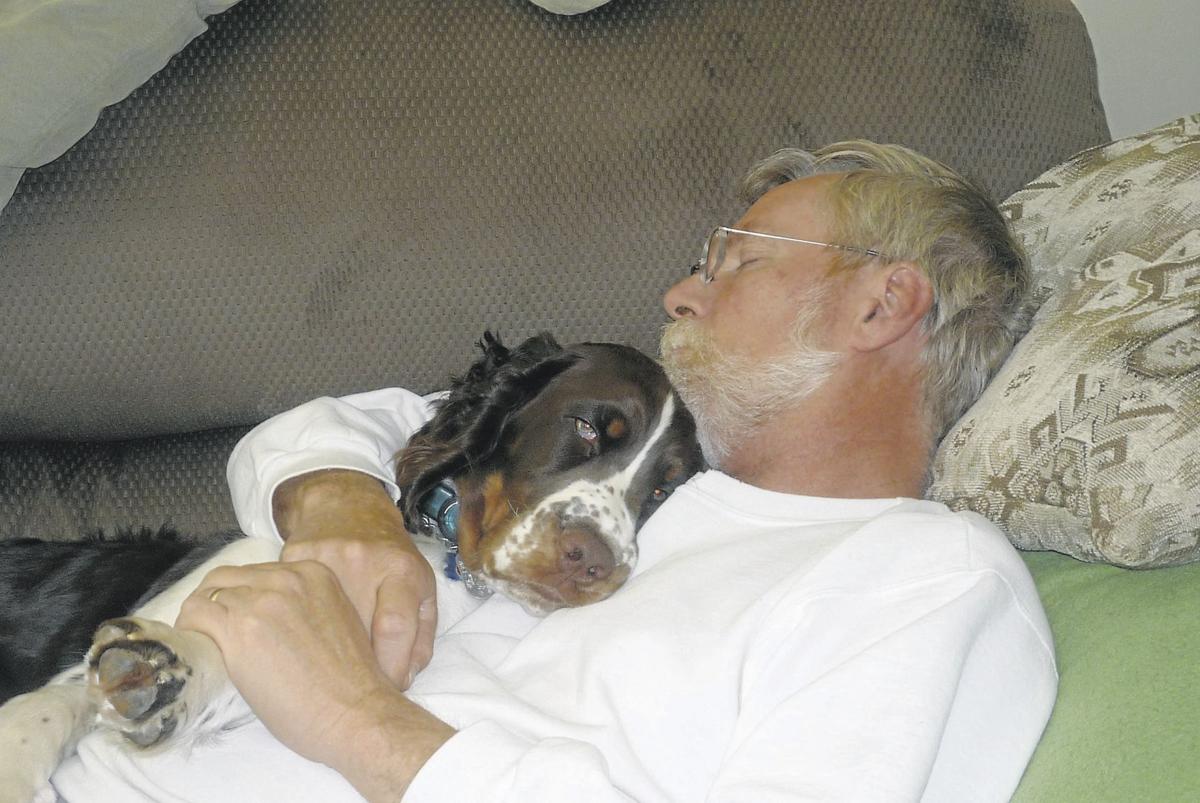 Autumn takes a nap with Dad.

A young Autumn is shown with Ian Greene. 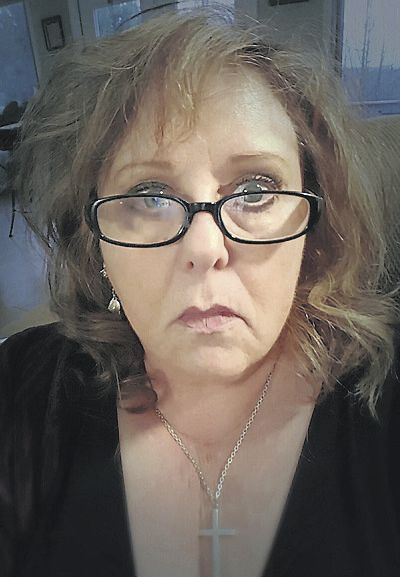 I cannot recall a day in my life where a dog was not a member of my family. My parents bred Irish setters and we were active in the local kennel club — showing for conformation and obedience. We were taught how to help our dogs give birth, care for them, feed them, train them, and everything else my parents knew about how to be responsible dog caretakers. Most importantly, we were taught to cherish these innocent companions making us worthy of their unconditional love and the joy they would bring to our lives.

Newly married, my husband and I brought Summer, an English springer spaniel, into our home. She was followed later in our marriage by Spring, Bjorne, Winter, Ditto, and Autumn, all spaniels. Autumn was the puppy my son asked to be “his,” so we let him pick a puppy from a group of two litters. We went to a breeder intending to choose a black–and–white female springer, but that was not to be the case.

Our son could not decide between two girls and I suggested the breeder let the boys out of their pen where my son could see the two puppies interact and decide. All except one puppy exploded from their crate … this 6–week old puppy waddled over to my son sitting cross-legged on the floor, sat down in front of him, looked him up and down, and then sighed. My husband, the breeder, and I were holding our collective breaths, watching.

This little roly–poly liver tri-colored springer boy, after sighing, slowly got up, and waddled over my son’s legs, nestled down in them, sighed again, and went to sleep and that was how Autumn came into our lives.

I tell this story when I want people to understand the remarkable relationship shared between my son and our beloved Autumn. If there were a relationship that epitomized the stereotypical boy and his dog… they were it.

Fast forward 10 years … Autumn has gone everywhere with my son, he may or may not have spent several weeks at ummm… a local university as mascot to a Greek fraternity (I know nothing), he participated in the proposal my son made to a beautiful girl whom we all love, but who perhaps, Autumn loved best, (and she back) and he was intended to be a part of their bridal party.

I say “was intended” because Autumn unexpectedly passed away in March, just two days before my son’s 24th birthday. Springers are considered to be one of the longer-lived breeds, with a lifespan averaging 14 to 16 years. My son and his fiancée were building a home together, and Autumn was a part of that home. In late February, my husband and I drove to Wisconsin to pick up a female springer puppy for ourselves.

Arriving home, we noticed that Autumn had gained a significant amount of weight in four days. I was puzzled by this, but he had no decrease in energy, was eating normally, and showed no obvious signs of illness. I decided to take him to get weighed at the new puppy vet check appointment. He had gained over 6 ½ lbs since the last time he was at the vet — two weeks earlier.

I told Dr. Kimberly Bill, who had just purchased the Catawba Valley Animal Hospital (CVAH) practice that we would be putting puppy Nala on the same grain–free diet we had Autumn on. She said no to grain–free food as grain–free dog food was being associated with heart disease in dogs and she strongly recommended we stay with the food the breeder sent with us — a well-known grain–inclusive top-five brand.

In early 2017, the vet we consulted had suggested switching Autumn to a grain–free food, as he suffered with allergies manifesting all over his body as often infected, open and oozing sores. We struggled for over a year. We tried every allergy drug, OTC and prescription; nothing helped but steroid shots and antibiotics, which cured the symptoms, not the cause. I switched him to a grain–free food that avoided what we believed to be his allergens. His skin cleared up and he had almost no sign of any sores. We were very pleased.

Back at the vet’s in February 2019, I discovered the risk associated with Autumn’s food. He was examined and his heart and lungs sounded clear. Blood was drawn and the vet acknowledged the fluid in his abdomen. We were asked to bring Autumn in to have an ultrasound and perhaps an echocardiogram.

Autumn never made it to that appointment.

The next morning, we were back at our vet because Autumn began coughing and breathing in short little pants. An X-ray revealed something almost unbelievable.

It was so enlarged it appeared to touch both sides of his ribcage and we could see the fluid was building up and moving into his lungs. Dr. Bill explained that she believed Autumn had dilated cardiomyopathy (DCM), a disease of the heart muscle that makes it harder for the heart to pump blood. She felt he was in congestive heart failure (CHF) and she believed it was nutritionally mediated DCM, (most likely caused by his diet).

She started medication appropriate for the treatment of DCM. We were to get the echocardiogram and make an emergency appointment with a cardiologist in Charlotte.

Autumn never made it there.

Knowing that this beautiful soul died because of a decision I participated in to change his diet has been almost unbearable. I started reading all the information available on DCM and diet and could not believe the volume of information available, yet I had known nothing about it, and my previous vet had not mentioned it.

For an excellent source of information on DCM, taurine, FDA reporting, data collection, manufacturers and the need to meet feed guidelines and do food trials, personal stories, and most importantly, how to select a food considered “safe” for your dog, ask to join the Facebook page ‘Taurine Deficient (Nutritional) Dilated Cardiomyopathy.’ Last week, this group, with hundreds of veterinarians and researchers as members, had 73,000 members; today they have over 84,000. I can only hope that more people continue joining to learn about this dreadful disease, report any cases, and share their stories.

These are the most important points I feel every dog owner should know about DCM and specialty diets. (I say specialty diets as its predominantly grain–free kibble, but dogs on other diets that use atypical meat sources, diets with legume–rich food added, raw, or home–cooked food have also been diagnosed).

The FDA and researchers do NOT know what is causing nutritionally mediated DCM. Everything is a hypothesis and the FDA clearly states that in their latest update.

Some, but not all, dogs are showing decreased blood levels of the amino acid taurine (Autumn did not). Taurine should be naturally created in the body. Manufacturers adding taurine to the food will not help.

Hope is possible for those who discover the condition early, start medications, and change diet. Dr Michelle Rose, a veterinary cardiologist in Minnesota writes online: “At AERC, (Animal Emergency Referral Center) after over one year of closely monitoring our first few nutritional DCM patients, we are happy to report that we are starting to see full resolution of DCM in our patients that were caught before they entered congestive heart failure. The improvement was achieved, however, after many, many months of cardiac medications, taurine supplementation, and a diet change. Unfortunately, the long-term prognosis is likely to be much more guarded for patients in congestive heart failure, as fibrosis (scar tissue formation) in the heart can be irreversible when it occurs.”

Autumn’s case is not on the FDA “confirmed” list because, like many dogs, he did not live long enough to make it to the cardiologist for an echocardiogram. The only definitive ways to diagnose dilated cardiomyopathy is via an echocardiogram (heart ultrasound) or a necropsy. However, our veterinarian strongly suspects this was the diagnosis. Cases like his are part of why the FDA says this condition is underreported.

Dr. Bill of CVAH in Hickory states, “I have been sharing with my owners feeding grain-free food that there is very strong evidence of a potential link between grain-free diets and DCM. While the exact causation remains unclear, there is too much evidence to ignore the possibility that the diet is relevant in these cases. Until we know more, I think it is best and safest to feed a diet that includes grains. Since the initial warning, I have been to continuing education with both cardiologists and nutritionists. The message has been consistent: until we know more, err on the side of caution. Pet owners should discuss with their veterinarian the reasoning why they started the grain-free food in the first place. This may help to decide which grain-inclusive food they should switch to. The transition should still take place over a several days with a mixture of the two foods to help decrease the risk of GI upset.

“The bottom line is that we all recognize that people love their pets and are just trying to do their best to take care of them. I hope that people will listen to the warnings and heed the advice of the experts involved, until we know more. I do my best as a veterinarian to inform people of the potential risks involved with the grain-free foods. Some people will choose to listen and take my advice. There are others who do not, and they continue to feed the grain-free food at potential risk to their pet’s health. With the wide release of the FDA warnings putting real cases and numbers and breeds in front of people, I think this issue will become more real to people as we start to understand the science behind why more and more.”

Finally, please don’t assume that if your dog looks and acts OK they are OK. Get them seen by your vet. Get an X-ray, consider an echo, but please don’t assume. My boy only went grain-free for 18 months. We are devastated and we miss Autumn beyond measure.

Go to www.aercmn.com and under the News and Events tab, you can find Dr. Rose’s blog about this issue.

HANDYMAN SERVICES WE DO IT ALL!